At the end of any ad about investment funds, there’s always that disclaimer, some version of “Past performance is no indicator of future performance.” Allan Telio argues that the same message should be stamped on every potential candidate’s resume.

History is filled with people who failed at everything until they found their calling, Telio argues, citing Walt Disney and Kurt Vonnegut as two examples who failed badly until they became runaway successes. That’s why Telio pronounces, “Resumes are dead.”

Telio made the remarks at Boston’s DisruptHR event in March 2016, but the presentation just went up on Vimeo yesterday. At the time, the former mock presidential candidate worked for the Startup Institute, a company that prepares workers for roles in the tech industry. He moved to the design company Ideo in October, according to LinkedIn.

His first argument: resumes introduce bias. A hiring manager could start looking exclusively for people who went to a top 25 school, only people who’d worked for unicorn startups or who live in a major city. When there is a giant pile of resumes in front of someone at the beginning of a hiring process, they want reasons to cull candidates.

An imperfect reason for moving applications to the “no” pile could eliminate the very best pick. “The people we need to be finding,” Telio contends, “are often the people who don’t have access to all the opportunity.” The very aspect that makes someone look good on paper might also be the reason they won’t work as hard once hired.

Telio specifically cites SessionM as a company that has changed its hiring process so its team can see the real person behind that piece of paper. The Boston-based loyalty marketing company had some bad fits after relying on the traditional interview-resume process early on. Two years into its existence, it created a much deeper series of interactions for potential new hires.

“You have to implement a process that really gets to the heart of the matter,” Mark Herrman, a co-founder of SessionM, told the Observer in a phone call. For them, that’s looking for candidates whose personalities mesh with its existing team and who approach work in a similar way to others in the still fairly small organization.

Telio goes on to say that a resume also might not capture a person’s side hustle. Does the candidate show how much they care about their work with projects on their own time? An engineer who goes to hackathons on the weekend or has an open-source software project on Github may be considerably more invested in learning more about code than one who got a computer science degree because a career counselor said there would be a lot of good jobs.

“Side hustles are one of the main differentiators between people who are genuinely passionate about their craft and people who are doing it for a job,” Telio said.

Like any good talk at a conference, he leaves his listeners with action steps. Here’s his three part solution to better hiring:

Herrmann said that SessionM hasn’t hired a bad fit since it upended its process. Asking people to do a bit of work and present it has been especially helpful, because he’s seen great interviewees do bad work and introverted prospects shine when given an opportunity to show their talents.

It might sound like a big investment for everyone involved, but it’s probably better than the alternative. Herrmann said, “We all know that once you’ve had a bad hire, it’s really painful to unwind.” 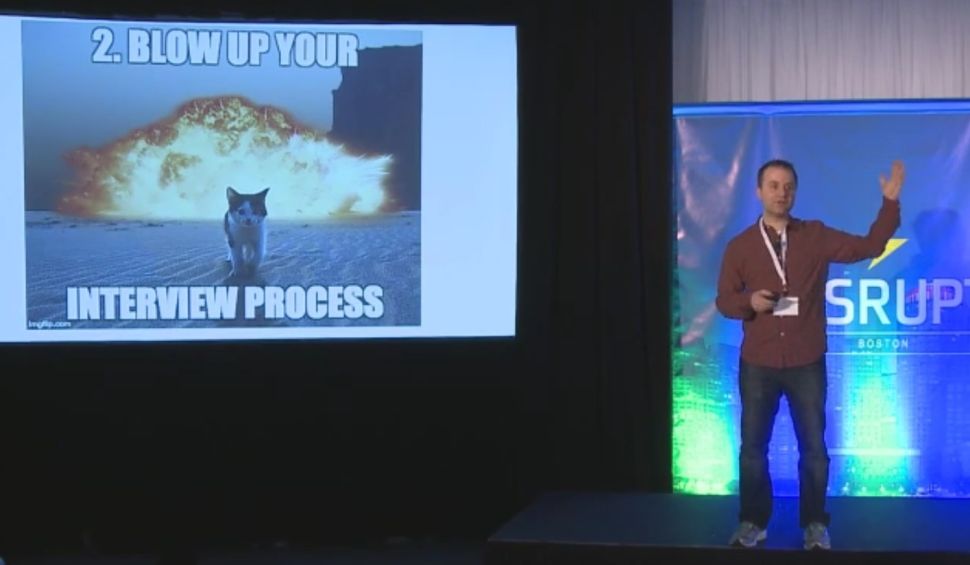