Episode 3 of Riverdale boils down to a simple enough question: What in the freshest of all hells is a “Sticky Maple,” the sexual act that sends Riverdale High into an uproar on this week’s episode? Maple syrup is brown, so it can’t be the most obvious option. The show’s provided answer (“Kind of what it sounds like; It’s a Riverdale thing”)  comes short of satisfying our inquiring minds.

‘Body Double’ is the most uneven Riverdale entry to date, showcasing a show that is very much still figuring itself out. What tone is Riverdale aiming for, exactly? …Something between media-aware teen drama, Veronica Mars teen mystery, and Gossip Girl-level smut, all under an atmospheric Twin Peaks sheen. It’s a lot to live up to and easy to fall short of.

The central player of the week is Veronica who is slut-shamed after a date with Riverdale’s douche in-residence, the captain of the football team. Slut-shaming is certainly a topic you would expect a CW teen drama to tackle in 2017, but the problem here is the show’s attempt to do so in the most unbelievably sanitized manner possible while also dialing up the tawdriness to 11.

See, despite being the topic of the episode, Veronica didn’t actually have sex with the douchey jock, which immediately cuts the legs out of her sex shaming. (The two did not even Sticky Maple!) The entire episode anchors on an accusation of sex rather than in the act itself, which leaves the show ill-equipped to make a bigger point about women not being ashamed of their sexuality.

Despite their chiseled good looks, the teenagers of Riverdale don’t have sex: they play Seven Minutes in Heaven (…), make out in cars, and at worst, make love in foggy cars or by the side of lakes. The show itself places sex on a weird pedestal so, all of her rallying against this toxic culture feels like it is coming out of the side of her mouth because no, neither Veronica nor any of the other women of Riverdale High actually had sex on a first date, omg, can you imagine? Ew! Gross!

Aside from tracking fog patterns, what else is there to do in this town of Greek Gods other than have sloppy sex at every available opportunity?! (*Pounds fist with Kevin Keller.*)

And despite beginning with a Snapchat, this football team is revealed to actually keeps track of the women they lie about having relations with in an elegant handwritten and leatherbound ledger. Presumably, they pass this grimoire around between practices whilst giggling?

Elsewhere, Archie Andrews continues his pursuit of a musical career, which brings the show to a grinding halt each time. I maintain that Archie Andrew’s particular brand of wholesomeness would have worked much better if he had been the corpse at the center of the show’s murder mystery; a boring reverie that only exists in flashbacks.

To be fair, the show does comment on the fact that he is a freckle-painted football player wanting The Pussycats (a group of black female artists that owes its name to having to claw their way into rooms that men like Archie can waltz into) to perform his autobiographical songs.

This would be good and woke if it wasn’t for the fact that one sloppy lyric suggestion later, the three women are in awe of Archie Andrews’ hidden musical talent. Much like statutory rapist Mrs. Grundy and Archie’s Luke Perry-esque father (played by Luke Perry), these side characters are, so far, only props to a musical journey I will never care about.

On the bright side, Veronica and Betty remain highlights of this adaptation having now proven that they do not require Archie anywhere near their plot lines to be interesting because, Holy sh-t, Betty!

‘Body Double’ is at its best when an unhinged Betty is pouring maple syrup over Douchey Jock, whom she seduced, drugged, and handcuffed inside a hot tub as she threatens to boil him alive lest he confesses his sins… All while wearing a sexy wig because, reasons… Hell, YES. Crazy is a wonderful color on overlooked girl-next-doors.

Betty delightfully gains new layers of crazy each week and now appears to be channeling her mentally unhinged off-screen sister whenever she changes lipstick shade. That is the Riverdale that speaks directly to my troubled soul. I don’t hate Riverdale; I don’t love Riverdale. I simply Riverdale — week after week.

– ‘Jughead’ is already a nickname; ‘Juggy’ is just an offensive misuse of those four letters.

– BABS! Hai girl! Your eyes do not deceive you; that was indeed Shannon Purser, Stranger Things‘ Babs as Ethel Muggs, one of the shamed women of Riverdale High. Here’s hoping Riverdale gives her a better fate… Though probably not considering her interest in Betty’s darker side.

See you next week! 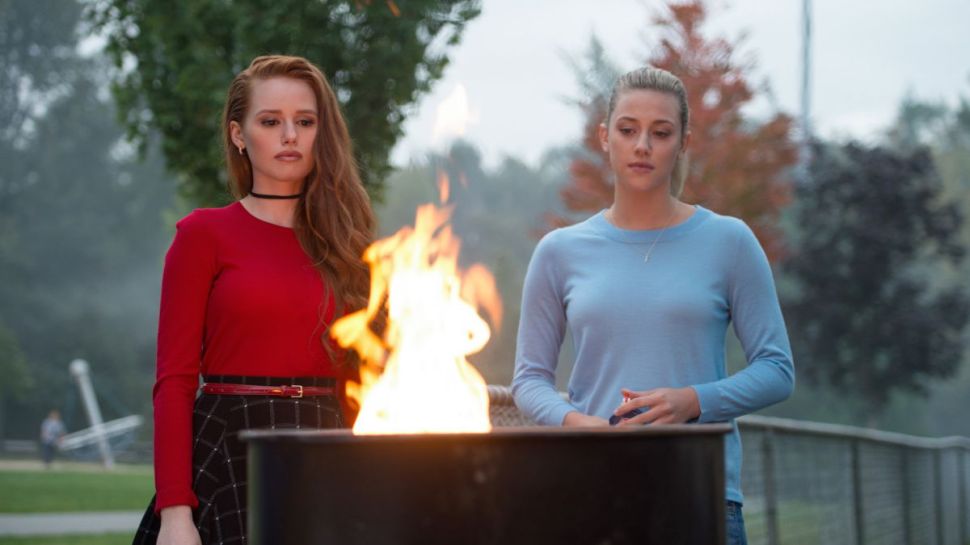