No less than five episodes in, Riverdale finally gets to burying the corpse discovered at the end of the pilot. You remember, right? The decayed, milky ginger that was Jason Blossom. Part of the reason why this Murder Mystery is failing to grasp interest so far into the season might be that we still know nothing of ole Jason. He played football, had a torrid affair with Betty’s sister, and a tender holding-hands-on-a-boat kinship with his twin sister, and that’s about it… He still hasn’t spoken a single line of dialogue in any of his soft-lighted lakeside flashbacks. Much like another redhead denizen of Riverdale High, Jason Blossom is still kind of a vacuum of interest at the center of much more interesting characters.

As star-player Veronica puts it, burying Jason gives us a deeper look into “the Gothic Horror Show that is Cheryl Blossom’s life,” and yeesh, the parents of Riverdale are a special breed of fog-bred monsters, aren’t they?

It’s still hard to relate to Cheryl since everything about the Blossoms is so completely cartoonish. – Every member of the Blossom family has a string of red hair, including creepy one-eyed Granny Blossom.

As we come to see this episode, the Blossoms are short two quirky relates of giving the Addams Family a run for their money. Not to fault the acting, but even at her most genuine, Sheryl still feels like an understudy giving her all in a very bad play. (Disclaimer: it might be the acting’s fault.) Then again, perhaps I’m expecting too much from characters that wear pearl necklaces and lingerie during sleepovers.

I wish I could embrace the full craziness of showing up at your brother’s wake in the dress you wore the day you helped stage his disappearance on a lake, but I still can’t. Take me on that journey, writers! I want crazy I can root for here. Georgina Sparks is spinning in Gossip Girl’s grave at this wasted potential.

Not to be outdone in terms of creep parenting are the wholesome-but-quietly-deranged Coopers with the introduction of Patriarch Hal Cooper. The scene of him sipping 2 AM scotch watching old home footage of the suicidal daughter he sent to an asylum, is just shivers-inducing, taking things one degree past parental regrets to “borderline inapprops,” as the kids might say. No wonder poor Betty is fetishizing the redhead next door and teetering on the edge of a full breakdown with parents like these.

In a show with this flimsily-drawn characters that nevertheless takes such massive swings, it doesn’t take much for me to ship two characters and we have our first two contenders: Jughead and Betty. Bet-head. Jugg-tty? Whatever you want to call it, I’m into it. The possibly-homeless outsider and the Most Likely To Set The High School Gym On Fire second-string cheerleader? God, yes, please. That is CW methadone.  Plus, maybe making out with Betty will muzzle that horrible, horrible narration.

And what of Archie, you ask? The centerpiece at this table of growing pains and missed opportunities? The episode opens on him boxing shirtless because the CW knows that is what the nubile pre-teenagers of America want to see.

“You’re back to being boring,” says Veronica to Archie. Back, Roni? Really? When was the interesting? When he whined about playing football and or music whet. Pursuing your passion can be a source of drama; the issue here is that no one is opposing Archie! So, his self-generated angst just reads like a personality treat and thus Archie declining to becoming the captain of the football team because “that part of him that he would have to give if he was captain, has to be saved for music” or whatever the hell, just feels like insight from a “Deary Diary” entry that I still have no interest in reading.

Dude! Your classmate died; your older mistress was chased out of town. There are three women actively vying for your attention with the Pussycats’ Val breaking from the pack to throw her cat ears into the ring. And let’s not forget Jughead’s complex feelings for the best friend he aggressively insists on calling his best friend and hasn’t talked to in like two episodes now.

I am frankly way more interested in this new iteration of Reggie as an Asian-American who is unfortunately still on the outskirts of our merry gang, relegated to locker room fodder for Archie the Perpetually Pouting.

Between the snakes in the box, the Blossoms revealing themselves to be Ginger Daywalkers, and Archie still having too many feelings than he knows what to do with, it’s another gray day in Riverdale, but my hopes are high for Bring on the even more openly disturbed Cooper sister, I say! 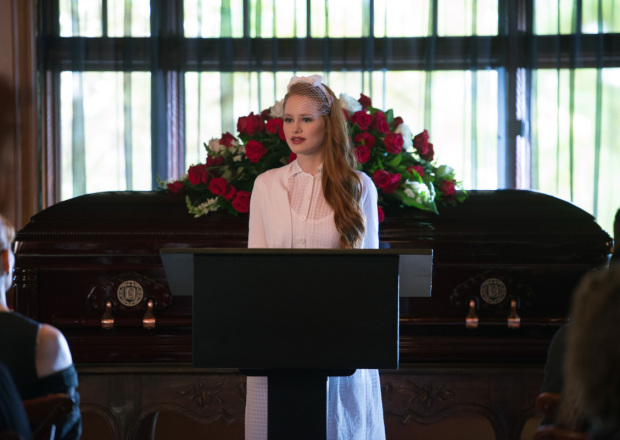