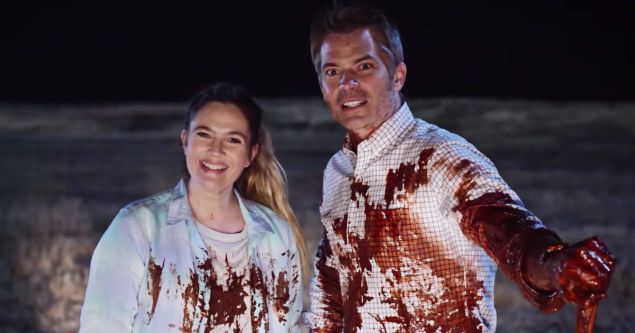 The moment you’ll decide if Santa Clarita Diet, which joined the Netflix original roster on Friday, is for you probably varies from person to person. What I will say is that within the first five minutes, Drew Barrymore projectile vomits for what feels like thirty seconds straight. At that point, you’ll either have discovered your new favorite comedy, or remember that you’ve heard good things about The Crown.

Yes, with that stirring moment, we’re gently thrust into the gory and often hilarious world of Santa Clarita. Like executive producer Victor Fresco’s other shows, Andy Richter Controls The Universe and Better Off Ted, Santa Clarita is sharply written and packs a surprising amount of heart. And brains, guts, spraying jugulars, balls of hair and high-performance luxury SUVs.

As the show opens, we’re introduced to the titular sunny, bucolic So-Cal town (I’ve never been to L.A., but I saw La La Land and read about how the sign got changed “Hollyweed” so I THINK I get the idea) and its sunny, bucolic realtor couple at the center of it all, Sheila (Barrymore) and Joel Hammond (a statuesque Timothy Olyphant). They’re kind of in a rut when Sheila is struck with a hunger raw meat. Soon, the packaged ground beef just isn’t cutting it so she commits to both a new, YOLO attitude and a diet of human flesh.

This also reignites her and Joel’s sex life. As in, human flesh sustains her but it’s also her fetish. Look, there’s a lot of subreddits for way weirder fetishes. Not that I’d know, but like, I wouldn’t NOT know.

The moment Nathan Fillion’s character arrives in the first episode, playing the manly new realtor at the office, we know he’ll be Sheila’s first victim. This isn’t even a spoiler. The second he came on screen I was like, “Nathan. Run!” After Sheila rips through his lower intestines, the show gets its rhythm as the couple disposes of the remains, Container Store-style. Thus, they decide to tackle this strange and frankly exciting new challenge hand-in-hand.

The bond between Joel and Sheila is the (suddenly not) beating heart at the center of Santa Clarita Diet. The show touches on themes like fighting for a love you’ve built for years in the face of sudden changes, and also how to decide if someone’s worth eating.

The bond between Joel and Sheila is the (suddenly not) beating heart at the center of Santa Clarita Diet. The show touches on themes like fighting for a love you’ve built for years in the face of sudden changes, and also how to decide if someone’s worth eating.

Meanwhile, their angsty daughter Abby (Liv Hewson) gets pulled into the operation but is just trying to get through high school. Which is HARD ENOUGH AS IT IS. She has a budding romance with the boy next door, Eric (Skyler Gisondo) whose father is the Hank Schrader of the show. He doesn’t have a thing for collecting minerals or being naive AF for six seasons but he is all up in everyone’s business.

So this isn’t a Mary Shelley or George Romero-style zombie story. (Is Frankenstein a zombie? Discuss in the comments below.) Instead, it’s a bright, quirky one, where Sheila’s need for flesh brings darkness and existential clarity upon the whole town. It seems like everyone in Santa Clarita has a secret. But Sheila’s is the worst of them all because people are dead now. Is anyone, even her own husband and daughter, safe?

Olyphant is the best part of the show as the ride-or-die, ‘03 Bonnie and Clyde husband willing to do anything to keep this family together. It’s great to see Raylan Givens trade in his cowboy boots for a plaid shirt, but not the cowboy kind. He gets through it all by staying stoned (this is still “Hollyweed” afterall! Right guys!? Hollyweed!) and by telling himself over and over that everything is fine. But is it? Will his wife be exposed? Can/will others get infected? How will Trump’s America affect the California real estate market? These are, or ought to be, the show’s biggest questions. Meanwhile, I’m trying to think of something good to say about Drew Barrymore as Sheila. Did you know Barrymore is 5’4”? I didn’t! That’s something! Barrymore’s detached performance mainly works when shit gets cray because it makes her character seem even more “out there.” Meanwhile, Olyphant is great at making everything seem more grounded and selling his devotion to his damned cannibal bride. Also, both teens are played pretty well.

Aside from Olyphant, Santa Clarita Diet shines brightest by the light of its jokes. Tone-wise, it could be seen as enjoyably absurdist, or all over the place, depending on how much of a buzzkill you’re trying to be at the next party you go to. If anything, it feels like so many things that shouldn’t be in the same show that they all end up working. I feel like I truly got my money’s worth. Which was zero because my old roommate is still logged into my Apple TV’s Netflix, #thankful.

Still, these ten 30-minute episodes are the funniest thing on Netflix since the last episode of The O.A. If Barrymore’s character were struck with kleptomania or a gambling addiction or a thing for minerals, it would still be a similar show. It’s more about standing by your loved one when these changes happen, which I think is what makes it so delightful. Being devoted to someone is hard because of the sacrifices you have to make. In Santa Clarita Diet, that sacrifice just happens to involve burying what’s left of the dude from Firefly in the desert. 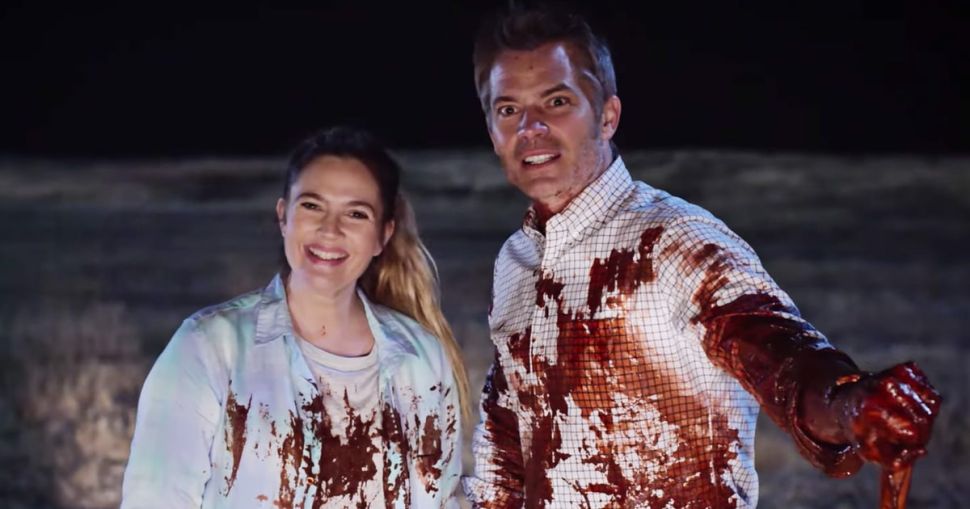