Terrence McNally recently stumbled into the perfect compliment for Santino Fontana. “I don’t think of you as a singer,” he told him. “Are you singing a lot now?”

Fontana practically apologized. “I was, like, ‘Yeah. I kinda am.’ ” Then, just to cover both bases, he added a helpless shrug. “’People are asking, but I’d rather do a play.’”

The truth is, there’s no too-much-of-a-good-thing for this performer. He’s so super- adept at acting and singing that even professional people assume he must be in one camp or the other, but no—both: He can get away with Denmark’s melancholy prince as deftly as he can get a Tony nomination doing Cinderella’s charming prince.

These days—and for quite a few years now—the musical side of his balancing act is winning over the straight-acting side, but, while his quest for “a good part in a good play” goes on, he grabbed his own night (February 18) in The American Songbook Series, which Lincoln Center unfurls annually in Columbus Circle’s elegant Appel Room.

“It will be one of those evenings where you will, hopefully, learn nothing about me,” he winks. “I’m only picking songs I love.” The program’s one caveat: All songs must have an American composer and lyricist, so no “Who Can I Turn To” and no Jobim.

“After that,” he says, brightening, “I can do anything I want. First, it became about songs that have stood the test of time, but it ended up becoming just my favorite American songs. A lot of them are standards. It feels like I’m paying homage to the songwriters. Once you get a Gershwin song, you know you need an Arlen song.”

It is taking a 16-piece orchestra to get the sound Fontana wants. “Yes, I know I won’t make any money,” he nods, “but when I started picking the songs, I wanted them to sound like this”—Charlie Rosen, his musical director, then translated this into how many pieces that would take—“so it’s big: four horns, four woodwinds, four violins, four violas. After all, I’m only getting to do this once. ‘Let’s go big, or let’s go home.’ ”

His guest-star is his co-star in life, Jessica Hershberg, his wife of 18 months. They met on his birthday six years ago, doing Sam Davis songs at a Birdland concert, and couldn’t stop staring at each other. A photo of Birdland’s logo decorates their home.

This Songbook gig is a rare opportunity to perform together, and they’re going extra innings with it, taking it to Las Vegas February 10 and 11 to try it out with a trio at The Smith Center. “It’s a great way to get the kinks out,” he feels. “I’ve so much respect for these big concerts. I don’t want to do it once and not know how it’s going to go.

“The orchestrations—that’s ultimately where I’m most excited because of the three guys I got. They’re helping it become more of a jazz sound. It’s saying something about who I was, growing up. It was definitely the music that my family listened to.”

Born 34 years ago in Stockton, California, Fontana grew up in Washington State, “listening Latino—Frank Sinatra, Dean Martin, all those guys” (who else, if you’re one-half Italian, one quarter Portuguese and one quarter Spanish?)—but he didn’t let his ethnicity or musical bend divert him from his goal of becoming A Serious Actor.

His time in the University of Minnesota/Guthrie Theater Actor Training Program was one long nonmusical: Six Degrees of Separation, Death of a Salesman, As You Like It, 9/11 Project, Once in a Lifetime, On the Verge, Love’s Labour’s Lost and Hay Fever.

For his parting shot—and the last show ever done at “the old Guthrie”—he got in his first Hamlet. (Aaron Frankel’s book, Shakespeare for American Actors and Directors, has Fontana’s Hamlet for its cover boy.) “George Grizzard, whose Hamlet opened that theater in 1963, sent me his opening night gift on my opening night: a copy of Hamlet from the early 1800s, in a box. You opened it, and you could smell the age.”

From all accounts, Fontana appears to have held his no-musicals—just straight dramas resolve right till the Manhattan city limits, where he abruptly broke into “They Were You” and was immediately cast as Matt (The Boy) in The Fantasticks, when it resumed its historic 42-year Off-Broadway run uptown at the Snapple Theater Center. It was that kind of career shift—from Hamlet to Matt, just like that.

The Gods of Theater were evidently not pleased. When he resumed arrow-straight acting, he landed the lead in Neil Simon’s Brighton Beach Memoirs and did all nine of its Broadway performances. Next, almost as briefly, was Rodolpho in Arthur Miller’s A View From the Bridge, but a fight-scene injury in previews totally sidelined him.

He had a nice, long, uninterrupted run with the Pulitzer-finalist play that introduced Stephen Karam to New York audiences, Sons of the Prophet, and it unleashed a deluge of scripts “where I’m a shy gay guy who, at the end of the play, starts crying.”

His musical Broadway debut was divided into three different parts (soldier, bather, artist in the 2008 Sunday in the Park with George). Then, he was seen (if not heard much) as Billy Elliot’s older brother, who rarely sang. His most recent stage role was that of Moss Hart in a Tony-contending Best Play that played like a musical, Act One.

In his short time on the New York stages, he has raked in a few awards. Those nine performances of Brighton Beach Memoirs were enough to earn him a Drama Desk Award! And, despite his Latino Concentrate, he won the Clarence Derwent Award from Actors’ Equity for playing Algernon Moncrieff in Oscar Wilde’s The Importance of Being Earnest; for that, he credits his Lady Bracknell and director, Brian Bedford.

“I really did love Brian,” he confesses. “His energy was like a child’s, in the best way—and so smart. Just watching him—how he’d lower his voice to get a laugh at the end of the line. The contrast is what made people laugh, even if the line itself wasn’t funny. If he knew an antiquated line wouldn’t get a laugh now, he’d do that.”

When Fontana did a rewrite of The Roar of the Greasepaint—The Smell of the Crowd, he called Bedford regularly because “for every funny line I tried to write for Sir” [the hoity-toity character Cyril Ritchard originated], “I would always imagine Brian’s voice.” The show was done at Vassar; its next step is a three-week staged workshop.

Fontana’s chief acting hero hailed from the stage—“Philip Seymour Hoffman was a big north star for me”—but coming in close seconds are two screen stalwarts: James Stewart and Tom Hanks, both of whom (Stewart in The Shop Around the Corner and Hanks in You’ve Got Mail) beat Fontana to the persona-defining male-ingénue part that he finally played opposite Alexandra Silber at Caramoor in 2013 (She Loves Me).

“Sheldon [Harnick, the lyricist] told us that he thought it was the best sung version of the show that he had ever seen. We were, like, ‘No, it was the best acted version.’ ”

The careers that Stewart and Hanks created for themselves are examples of what Fontana is shooting for. “That’s where I want to go in terms of material,” the actor admits. “Being charming and fun on stage is great, but it can quickly turn into a trap. People just want to see you do it over and over and over again. I’m perfectly happy to put on the clown suit from time to time, but I definitely don’t want to live in it.

“Sometimes, I’m afraid of energies because I have a personality. I once had a mentor who’d always remind me: You can be entertaining, but that’s not your job as an actor. It’s a risk to want to be comfortable being yourself and bring an audience to you, but it’ll make you a mannered performer, which is fine if you want to be you.

“If I wanted stability, I wouldn’t be an actor. If I wanted to be myself, I’d not pick a job where I literally avoid myself. I want to step into other people’s shoes, so I have to tell my personality, ‘I don’t care what you think. Shut up! This isn’t about you.’ ”

Fontana wasn’t visible for his film debut and still won awards (two for Best Vocal Ensemble); his was the villainous voice of Hans in Frozen. He has done episodic TV and a smattering of series (Submissions Only, Shades of Blue and Crazy Ex-Girlfriend).

“I have a good time with television,” Fontana says. “It’s completely different. People are chosen to be on stage because of not only their acting and storytelling abilities but also because of their editing abilities. As a TV actor, your editing doesn’t matter because you’re not editing your own work. Your job is simply to give them truthful, creditable options, which can be fine and fun depending on what the material is.”

His musical chops came in handy for Crazy Ex-Girlfriend, which parodied the theater conceit of bursting into song to express emotion. The lyrics got raw and raunchy at times, but Fontana blithely belted them out as if they were “Begin the Beguine.”

When he signed up for the series, Crazy Ex-Girlfriend was to be a 10-episode half-hour show for Showtime, but Showtime passed on it, and the CW network took it on and jacked it up to 22 hour-long episodes, turning a three-month commitment into a seven-to-nine month commitment. Before signing up for six years, Fontana tested the waters for a season and opted to bow out. “If I wanted to be the same person for six years of my life, I’d never have been an actor,” he says. A second season would have cost him two prime Encores! shows: God Bless You, Mr. Rosewater and 1776.

Some more immediate gratification for his return to theater is in the offing. Irons-in-the-fire include a reading of the Tootsie musical and a reworking of I Can Get It for You Wholesale. Who knows? He may even start flexing his Shakespearean muscles again—if not at Classic Stage Company, then in a summer production of Julius Caesar.

“I still audition for whatever comes along. I just sent out a tape today. It never ends.” 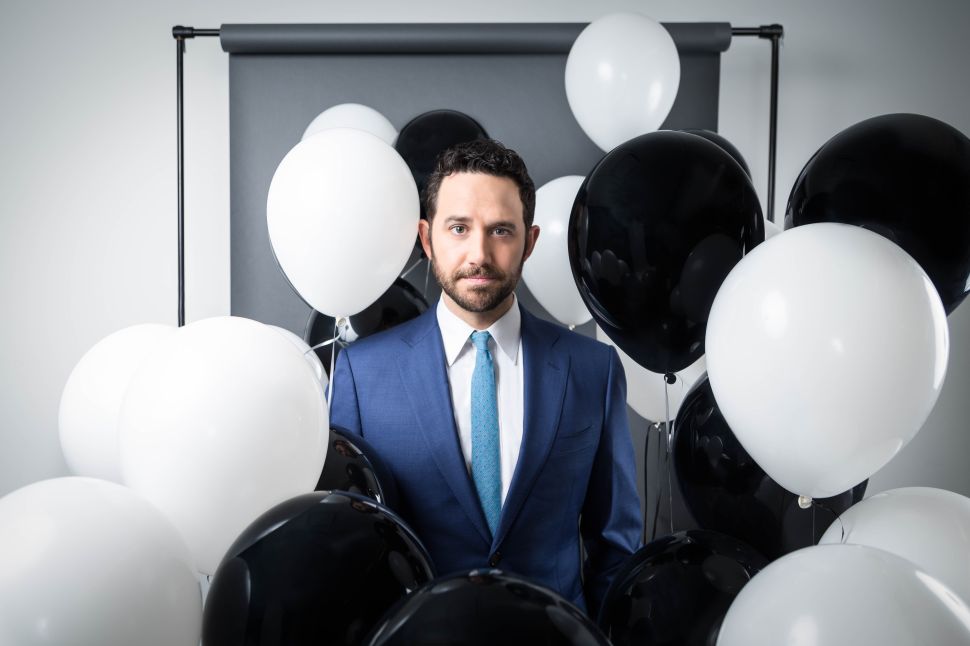