So reads directions to what may be the greatest scavenger hunt ever, especially for appreciators of contemporary art and extreme weather. Bring sunscreen and , dress for hiking, and don’t forget to charge your cellphone. This is Desert X, an installation of 18 artworks that stretches some 40 miles across California’s Coachella Valley.

And the desert itself, beautiful and harsh, is part of the exhibition.

“I’m not interested in landscape being a backdrop,” says Neville Wakefield, artistic director. “This is equally about drawing attention to the landscape. It’s part of each piece.”

Wakefield, who has also been curator of projects at P.S.1 Contemporary Art Center and Frieze, joined Desert X about 18 months ago. It’s a project of Desert Biennial, a nonprofit steering committee and charitable organization that promotes art and the local environment, and includes Steven Nash, former executive director of the Palm Spring Art Museum, and Beth Rudin DeWoody, art collector and president of the Rudin Family Foundations.

Under Wakefield’s direction artists like Lita Albuquerque, Glenn Kaino, and Richard Prince were invited to visit the Coachella Valley, from Whitewater to the Salton Sea (about 70 miles), explore, and choose a location for their work. Some had previous desert experience, others did not. Either way, says Wakefield, “The process of selecting the sites, in many cases, was as important as creating the art. The place itself becomes generative.”

Giving the artists the lead, he says, was risky, yet ultimately resulted in a wonderfully complex show. Had the artists been pre-assigned locations, rather than finding ones that triggered responses, well, that would be different. And not really “site-specific,” adds Wakefield, citing Robert Smithson’s Spiral Jetty and Michael Heizer’s Double Negative as examples of the essence of the term. Desert X is, for the most part, land art or environmental art in its truest sense. Relationship to the surroundings is vital, and part of the experience.

“Apart from the cliché of being about the journey not the destination, it’s really a journey of discovery,” says Wakefield.

Because the artists chose the sites, there’s no pattern nor organized path for this journey. But there are maps, and viewing all the work is possible in a weekend. Pay attention to what’s outside the car window. Wakefield considers each step a threshold to cross: driving, getting out of the car, walking, approaching the art. “The spaces in between frame the experience and the artworks as specifically as the walls of a gallery do. The process of getting there is part of the conditioning of each piece, leaving behind certain attachments. It’s a very kinesthetic experience of the desert.”

An experience that will be different every day and every moment of the day, sunrise to high noon to dusk to black of night.

Note: Spiral Jetty and Double Negative, both completed in 1970, are more remote (MOCA recommends a four-wheel drive vehicle when seeing Double Negative) but the sentiment is the same, especially Dia’s reminder of the golden rule of outdoor adventure: leave no trace.

Desert X is on view from February 25 through April 30, 2017. For more information, including a map, go to desertx.org.

There are related events in the Palm Springs area through the show’s run, which continues through the Coachella Music and Arts Festival. psmuseum.org/palm-springs-art-programs/desert-x 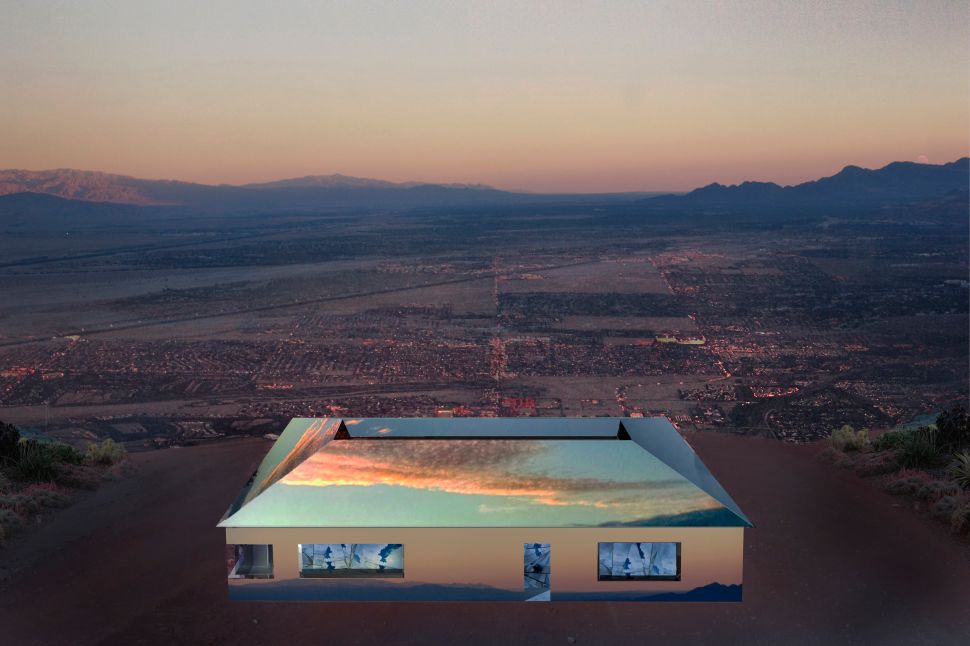