On February 24, the editor-in-chief of Sierra Club Magazine, Jason Mark, published a long-winded excuse for meat consumption and the “moral” case for it. He opened with how he “experimented” with being a vegetarian for environmental reasons, and by the second sentence he admits, “I had no problem with killing animals.” Obviously, these reasons should refute all arguments in favor of meat consumption for any environmental organization.

Several reports have linked meat-eating to deforestation and have cited that a reduction in meat consumption is imperative to curbing the destruction of the environment. A paper published in 2015 by scientists at Florida International University and Oregon State University found that “livestock production is the single largest driver of habitat loss, and both livestock and feedstock production are increasing in developing tropical countries where the majority of biological diversity resides.” The scientists advised that the key to biodiversity conservation is to reduce meat consumption.

The Rainforest Alliance noted that this environmental impact is driven by the meat heavy diets of Americans. “If the entire world ate US levels of meat, which hovers above 200 lbs a year, it would mean a projected 320 percent increase in animal products and the cropland needed would be at least double what we use today. We simply don’t have enough land available to meet the demands of the global embedding of the US diet.”

Meat consumption is one of the greatest contributing factors to climate change, and the United States consumes more meat per-person than any other country. Meat consumption redirects food source for animal feed; global crop production could be feeding billions more people if not used to fuel the meat industry. “Currently, 36 percent of the calories produced by the world’s crops are being used for animal feed, and only 12 percent of those feed calories ultimately contribute to the human diet (as meat and other animal products),” cited a 2013 study conducted by scientists at the University of Minnesota and University of Maryland. “We find that, given the current mix of crop uses, growing food exclusively for direct human consumption could, in principle, increase available food calories by as much as 70 percent, which could feed an additional four billion people (more than the projected two to three billion people arriving through population growth). Even small shifts in our allocation of crops to animal feed and biofuels could significantly increase global food availability and could be an instrumental tool in meeting the challenges of ensuring global food security.”

The moral case for meat consumption in America, where vegan and vegetarian dietary options are in no short supply, could end here, before even considering the animal welfare and animal rights implications of consuming meat. However, Mark attempts to argue a paleo-philosophical argument for the moral consumption of meat. “Might the suffering that animals experience in the course of being sacrificed for human food contribute to some other social good? I think the answer is a conditional yes,” Mark writes, before embarking on a series of arguments that meat consumption is enlightening. “By eating animals, we can remind ourselves of our animal natures.”

The paleo-philosophical argument used to defend eating meat claims the consumption of animals helps humans reaffirm our animal nature. In fact, eating meat disconnects us from nature because it reinforces the destructive attitude that nature is subversive to man. The paleo argument for meat consumption ignores that humans began eating meat through scavenging, which evolved into hunting, but both were based out of necessity. Humans, especially Americans, have evolved from meat as a dietary staple to eating meat as a dietary preference.

“Meat eating can be an ecological good insofar as the act reaffirms an environmental ethics that places other species’ interests alongside human interests,” Mark argues, claiming that meat consumption can somehow produce an environmentally friendly consciousness by “humanely” killing animals to consume them. There is no humane way to kill an animal against its will, and meat consumption is in direct conflict with the interests of other species. Veganism and vegetarianism are based in part on an ethical decision to reduce suffering and mitigate the destruction of the environment by altering one’s dietary choices.

Mark states that the relationship between a sheep and a shepherd is more meaningful than a human’s relationship with broccoli. This is, of course, an archaic argument, since only a small handful of Americans tend to a herd of animals for their own sustenance. Based on this logic, eating the dogs and cats we keep as pets would somehow put us in tune with natural world.

“To eat meat is to consume the body of the world,” Mark states, which sounds like something from a cannibalistic cult.

The article then diverts into a commercial for Dinner Bell Farm, which the author discloses is owned and operated by his friends.

It is shamelessly irresponsible for one of the largest environmental organizations in the country to defend meat consumption, the most environmentally destructive practice on an individual scale. The Sierra Club should be setting the standards of environmentally friendly habits and policies rather than perpetuating false myths. It’s one thing for the Sierra Club’s members and employees to eat meat, but it’s an entirely different plane for the editor-in-chief of its magazine to make a “moral” case for meat consumption and plug his friends’ company. 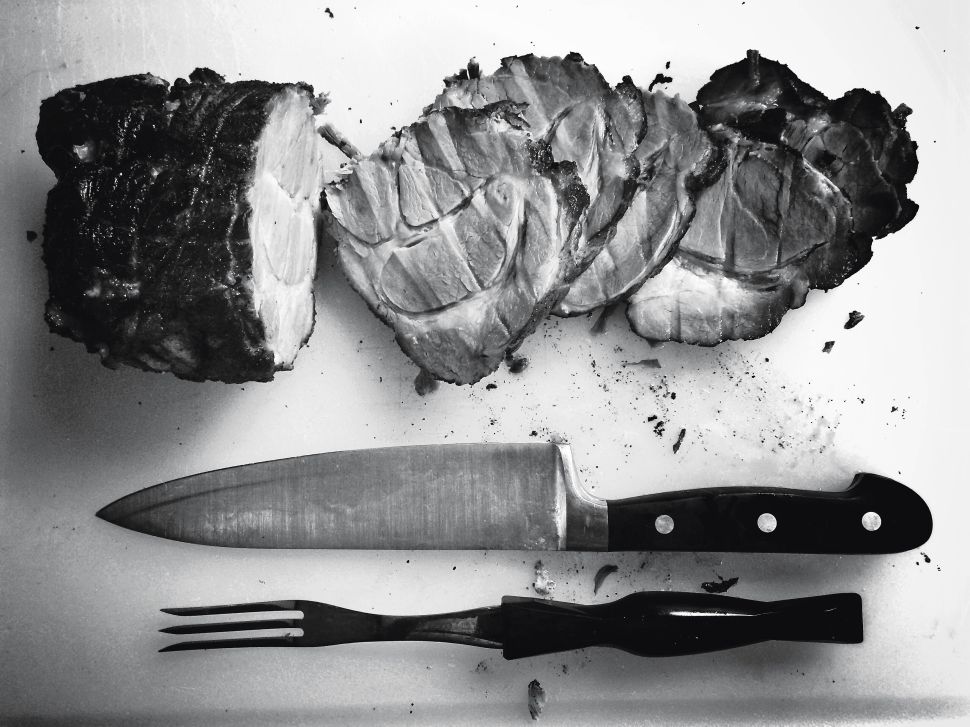