This episode starts off with a bang. Specifically, the soft tremor of a miniature gong that sits in the middle of the Cosmo offices. Whereas last episode’s bang was more dramatic, this one was anti-climatic. Joanna announced who will replace her. Nervous smiles populated the room, but it seemed as if most people were satisfied. The woman, Michele, is an ASME award-winning editor and is obviously competent enough for the job.

But this is a reality show, and nobody is ever happy (for long, anyway). While most of the cast spend at least fifteen minutes of this episode fretting over the upcoming changes, the only person who really takes this “takeover” to heart is Leah. I like Leah – she seems sweet and fun to be around, and her anxiety over this feels genuine. She opens up to her husband (who has great hair by the way), she snaps at her underlings, and she loses her voice. She has survived one Editor-in-Chief takeover (she is one of 5 people left from the previous regime), and she fears that her luck has run out and that she’ll have to look for a new job. Her struggle is real and relatable, and her intense imposter syndrome is something all successful people struggle with. And I’m happy they didn’t drag this out for another episode. In fact, it had a nice, happy conclusion -– with Joanna assuring Leah of her competence and that she sees great things for Leah in the future.

Tiffany, the Senior Fashion Editor, gets into some drama of her own. New York Fashion Week was in full swing, and her assistant, Shalaeya, dropped the ball. Tiffany hasn’t gotten confirmed for important shows, she gets second row instead of first. And Tiffany is pissed. Although I do understand her frustration, her argument that there’s this hierarchy is specious. I mean, it really doesn’t matter that you’re not in the front row, and caring about where you sit just seems petty. As long as you were able to see the clothes and can reserve the ones you like for future shoots, what else matters?

But Shalaeya hasn’t just screwed up the invites, she has also done a shoddy job of keeping the closet in order. Black hangers are being used (and in Tiffany’s closet, only clear ones are allowed), and the clothes are not organized properly. But instead of letting Shalaeya fix the problem, Tiffany decides to be overbearing to make sure everything gets done according to her specifications.

This too gets resolved by the magic touch that is Joanna Coles. Joanna’s advice — that your employees are not your friends, but that you should still be kind even as you need to correct their behavior — is like something you’d find in a parenting book. But it makes Tiffany feel better about needing to give tough love to Shalaeya.

Yet the most dramatic of all the drama in this episode is, of course, Diandra. At least with Leah and Tiffany, you understood their frustrations and anxieties because they are pretty normal workplace drama issues. But Diandra takes workplace drama to a whole other level.

See, Diandra likes Evan, the new fitness contributor (who inexplicably joined a staff meeting that had only main and tertiary cast members present, because that’s realistic). But Diandra is also ridiculous. At first, she acts like she can’t go out to lunch because she wants to keep things professional, to just be friends, to not take things too far.

But then, Diandra spends all day flirting with Evan, annoying her colleagues (specifically the savage Stephen and James). And then, when her colleague Danielle, who, incidentally, is Evan’s boss, has a meeting with Evan and has him demonstrate the workout moves they might put in an upcoming issue, Diandra gets weirdly jealous. She even makes jokes to Tiffany that Danielle is all up in “her man.” This kind of ownership is not the kind of thing you expect to see from a woman who wants to keep things “professional.”

And the character of Evan is very confusing. I’m starting to think he’s just an actor that they brought on to start drama because something feels forced about him. That scene in his apartment with Mike, who is given the title “Evan’s bro,” and came over for a proper “bro” chat, simply added to the entire hilarity of Evan’s supposed position.

So despite some real and needless drama, what I believe is this show’s strength has nothing to do with the plot at all — that it embodies the essence of a magazine. From the colorful, dazzling on-screen graphics, to the sharp cuts that take you seamlessly from scene to scene, to the titles of the episodes (Vol. 1, No. 2), this show is like a virtual magazine in of itself.

So far, the storylines are mediocre, a lot of the supposed drama feels fake or overblown (I’m looking at you, Diandra and Evan). But the saving grace is the insider-y feel of it all. With reality television, you don’t necessarily need riveting storylines to keep viewer interest, you need strong characters with lives you wish to emulate. And this show definitely has that, specifically with its main characters like Joanna, Diandra, Tiffany, and Leah. But I think that if this show wants longevity and not to be some one-season-wonder, it needs more compelling material. The previews for the season seem promising, so, for now, I’ll keep watching. 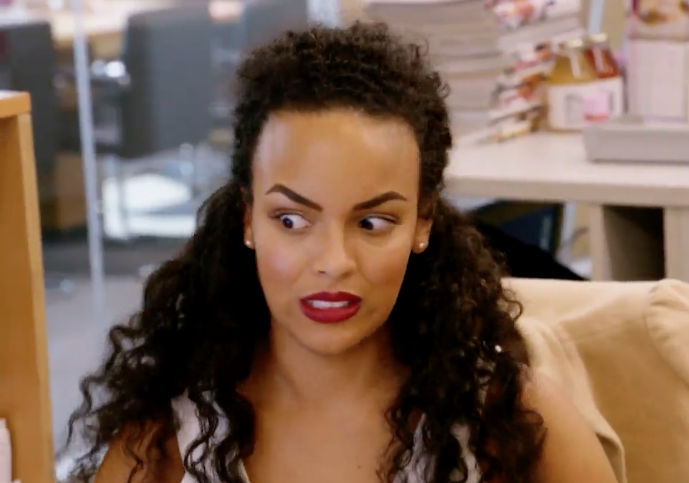