Cosmo is the sex magazine for women. (Despite Joanna’s attempts to make it more of a fashion magazine). And so, naturally, this episode began with Joanna and co. sitting in on a Magic Mike audition. Um, literally. As the men writhed on top of the magazine editors to demonstrate their lapdance capabilities, Joanna was clearly uncomfortable (Diandra, on the other hand, enjoyed every minute of it). But, after all, this is “just another normal day at Cosmo.”

And then it’s back to business. Joanna met with her replacement — Michele to discuss and praise her team in the hopes that Michele won’t fire them, describing them as the “core group” of the Cosmo team. And how convenient is it that the “core” group just happens to be the “core” cast of this show.

Evan, the “fitness contributor,” who is definitely just a paid actor, got a spot next to the cattiest guys in the office — Steven and James. Steven, who despises Diandra, has a vested interest in destroying the Diandra-Evan budding romance.

But because Diandra has the maturity level of a five-year-old, I don’t feel bad for her. She is the queen of mixed signals, of saying one thing and doing another. She’s the kind of person whose life is one big mess of drama of her own making. But because they lack the ability for self-reflection, they are constantly wondering how their life got so dramatic. But, of course, it’s never their fault.

And this is Diandra’s problem — she wants to have her cake and eat it too. She “vibes” with Evan, but doesn’t want the whole office to be “getting in my business.” And so when Matthew Hussey, the office “relationship guru” approached her about her and Evan’s relationship, she was shocked and upset. She wants everyone to back off of her supposed “professional” relationship with Evan (even though she had been giggling like a high school girl over him like every second and has been disruptive in the office by flirting with him). Because, hello, she’s trying to be professional people! How dare you not all have the same courtesy Diandra has?? Stop talking about her!

After talking to Matthew, Diandra stormed off in a rage – how dare Tiffany tell Matthew she likes a colleague!! But because this is an office and Tiffany is her best friend, this “issue” was resolved pretty calmly and easily. So luckily that turned out to be a non-issue. But, I doubt this taught Diandra an important workplace rule: don’t talk about things in the office in front of your colleagues you don’t want to be gossiped about.

As obnoxious and annoying Steven is, he has got Diandra pegged. He claims that Diandra is sometimes “more of an actress than a human being.” And he’s right — it’s like Diandra was made for reality television. It’s no surprise that she’s essentially become the main character, her drama filmed in and out of the workplace. And it fits into my theory that producers hired Evan to create drama for Diandra because he’s the perfect hot guy canvas for her to play off of.

Which is why we ended up in some bar or lounge after work, with Diandra and her buds, Nicole and Adam. And some friend of a friend — a tall, dark, and handsome glass of — caught Diandra’s eye. They proceeded to spend the night flirting away. They were dancing, they were laughing, Diandra was batting her eyelashes. A wonderful time was had by all, especially Diandra and this hunky man.

But then, because this is reality television, the actor/fitness contributor known as Evan Betts just “happened” to be at the same bar as Diandra. What are the chances? Um, close to zero. Do you have any idea how damn big New York City is and how many bars there are? (I looked it up. It’s 1,500 at any given time.)

Predictably, Diandra couldn’t handle this situation like an adult, so she “bolted” (as Adam succinctly puts it) with her new man-candy on her arm. She didn’t want to deal with this drama. But drama indeed followed her, and Evan was clearly jealous.

There’s nothing Evan can do, as he acknowledged in his talking head. But he did do what any self-respecting attractive male would do in that scenario. He hooked up with an old flame in a cringe-inducing scene where he introduced his old girlfriend to his “bro” as they pre-game it on the way to a double date.

This episode we also got to glimpse more of Joanna’s personality. She seems overly preoccupied with what men are allowed to do. In the first episode, she thought it was important for women to introduce themselves by their first and last names because that’s what men do and it projects confidence. Here, when setting up a meeting between her “core” staff and the incoming editor-in-chief, she decided to do a dinner because men usually do the same at the golf club. I get she does it to fight the patriarchy and all that, but it feeds into her tough, no-nonsense exterior. She’s the kind of woman who wants so badly to be respected like men are, that she’s created this implacable and cold demeanor.

But I’m happy that we were able to cut through that in this episode. In a dinner hosted at Philip Plein’s townhouse in honor of Joanna, she got emotional. She may have been overwhelmed by all the weird decor and entertainment that was on hand at the party. She even said in a talking head, “I’m not entirely sure if it’s hideous or fabulous.” (Well, considering the shitshow that was the Philip Plein show just a couple of weeks ago at New York Fashion Week, I’m leaning toward hideous).

But I think Joanna getting emotional was kind of beautiful. Seeing how much her senior staff loves her and how they’ve forged such a connection – that’s powerful television. Seeing this tough woman who has achieved such success break down because she has to leave a team she cultivated and groomed and developed, made even a hardened reality television watcher like me tear up. It felt real and raw — remarkably different than the tired reality tropes this show is trying to force onto it (I’m looking at you, Diandra and Evan). 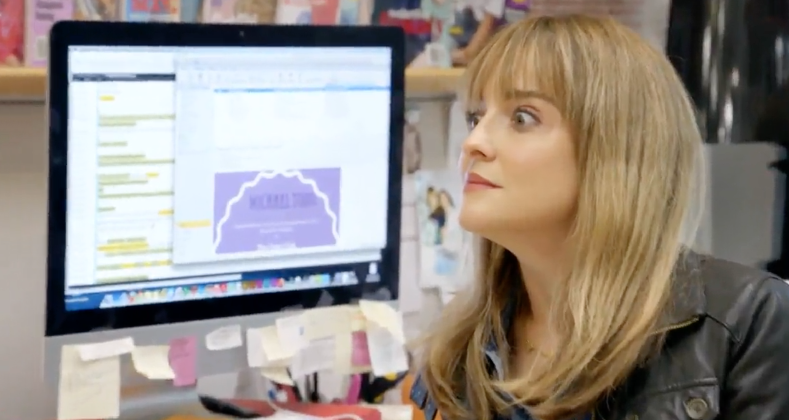