"Hey Trump, you and Robert Durst are both sociopaths… yet somehow Robert Durst is MORE LIKABLE." – @Mulaney #SpiritAwards pic.twitter.com/pjPY4w0Qe6

Two men who very much love each other.

Moonlight cleaned up, taking home the highest number of awards in the ceremony’s history.

Molly Shannon for the win!

Molly Shannon ends her #SpiritAwards acceptance speech by saying, "I really truly in this moment feel like a….SUPERSTAR!" pic.twitter.com/i08dsXjx0i

Welp, it looks like Casey Affleck’s doing a thing.

What an amazing time being back at the 32nd annual Film Independent Spirit Awards covering from the press tent! Here are just some of today's winners who we spoke to, who may find themselves on stage tomorrow on Oscar night!

A pigeon on the carpet? That is so indie.

There was, of course, another awards ceremony this week. A little something called the Oscars. That night, memes were born.

Why does Nicole Kidman clap like The Grinch?! pic.twitter.com/dhzN7Og8xC

No one uses the flower crown lens without including me. #eredcarpet #oscars @enews

And many jokes made the rounds.

If Oscar smiles upon you tonight, you know that you have arrived. Arrived at your moment. #Oscars

It's very weird that people's first instinct is to kiss Meryl Streep's hand but it also makes sense. #Oscars

It's very weird that people's first instinct is to kiss Meryl Streep's hand but it also makes sense. #Oscars

Brangelina divorce gunna be in this montage or what #Oscars

Ben Affleck trying to look like Casey Affleck? They both want us to forget about the sexual harassment and Batman. #oscars

Hacksaw Ridge looks like the movie they were filming in Tropic Thunder. #Oscars

So glad Asian actresses are finally being represented in this category #Oscars pic.twitter.com/CsXqG27gVn

And then there was the most insane twist ending of all time!

WATCH: 'La La Land' announced as #Oscars Best Picture winner, but only until a mistake is realized with 'Moonlight' being the real winner. pic.twitter.com/wYsUngcdwe

ty @DebbyRyan for capturing me saying "Steve Harvey is off the hook!" in real time and clutching @taylortrudon for dear life pic.twitter.com/NHKfJnFyPg

Guessing that's not the first time Warren Beatty has called out the wrong name at the end of the night. #Oscars

That was the most humiliating version of getting someone else's meal at a restaurant & taking a buncha bites before anyone notices. #oscars

Conspiracy theories abound! Will this mystery ever be solved?

I'm not going to sleep tonight until someone figures this whole thing out. Screenshots and theories please. pic.twitter.com/qYPwkTIi2g

I was recording the #oscars to a hard drive. This frame clearly shows that Warren Beatty was given the “Actress In A Leading Role” envelope. pic.twitter.com/PL3eA8Ds1i

OMG IT WAS LEO's FAULT. HE HAD THE ENVELOPE. pic.twitter.com/OJiSbSrFVj

Anyone get the feeling that @RyanGosling wanted #Moonlight to win? #oscars pic.twitter.com/djcUdYiA8F

Emma Stone backstage said SHE HAD HER CARD THE WHOLE TIME!!! pic.twitter.com/WecMyquaGp

The so-called “tolerant left” handed me the wrong red envelope as I walked onstage, causing me to present the award to non-winners

internet at its best here. Let's sharpen our knives. Maybe not either of their faults? Possibly just a small fuck up in a big moment? https://t.co/jdloEvHQXT 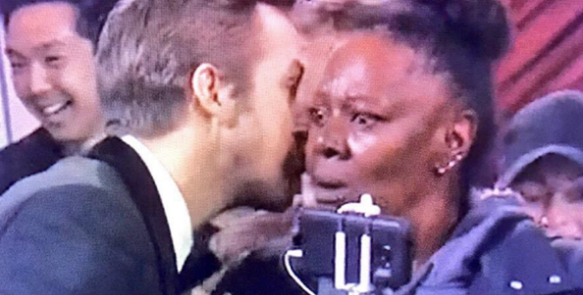