It goes without saying that America has its fair share of luxury ski locales to choose from, but it’s easy to see where towns like Aspen and Park City are taking their queues from after paying my first visit to St. Moritz, Switzerland. It’s where the deep pocketed converge with the good looking from all corners of the globe, and although it measures just 11 squares miles, navigating the underbelly of the city can be daunting without the proper introductions. Here, we’ve highlighted the four hideaways that you’ll want to frequent during a jaunt to this tony ski hideaway.

WHERE TO STAY: THE KULM HOTEL

The legendary Kulm Hotel could pass for the set of a Wes Anderson film. The bellmen wear white gloves and caps, fur clad hotel guests meet for tea in the lobby, and, if you happen to be in town for the Snow Polo World Championship, polo players gather for cocktails in the Sunny Bar where a set of gymnastics rings hang from the ceiling. It is, without a doubt, the most iconic hotel property in the city given its rich history dating back 160 years, when it was opened by hotelier Johannes Badrutt. It’s now the crown jewel in a portfolio of Engadine region properties owned by the Niarchos family, who in recent years have been actively spearheading the expansion and modernization of The Kulm Hotel to cater to a newer, younger crop of clientele.

In addition to redesigned guest rooms by Pierre-Yves Rochon, and the completion of a new spa facility that includes an outdoor heated swimming pool overlooking the Swiss Alps, the hotel also touts the newly opened Kulm Country Club. The formerly derelict pavilion and clubhouse was given an extensive facelift by renowned architect Lord Norman Foster, who chose to inject his signature curves into the 110-year-old town hub that will now play host to a rotating cast of celebrity chefs and musical acts from around the world.

WHERE TO EAT DINNER: KRONENSTÜBLI

Ten minutes from downtown St. Moritz, in the neighboring town of Pontresina, is The Grand Hotel Kronenhof. The secluded former private residence, which first opened its doors in the late 1800s, is home to a most unexpected dining experience that those in-the-know flock to from all surrounding alpine townships.

After winding through the hotel’s corridors, and opening an unmarked door, one happens upon Kronenstübli, a warm, wood-paneled eatery where the food stands in stark contrast to its surroundings thanks to the modern platings and over-the-top food preparations by Chef Fabrizio Piantanida. It’s also the only restaurant in all of Switzerland to offer “Canard a la Presse,” or pressed duck, which requires two restaurant staffers to turn a $5,000, hand-operated machine to press the bones and fat of the duck into a decadent sauce to garnish your duck breast.

WHERE TO EAT LUNCH: EL PARADISO

It’s more than likely you’ll be spending the first half of your day in St. Moritz on one of the four mountains – Corviglia, Corvatsch, Diavolezza, and Zuoz. Chairlifts usually operate from 8 AM to 3:30 PM, but the best part of each day comes at lunch around 2 or 3 PM for true “après ski” festivities.

None do it better than El Paradiso, where outdoor cabanas overlooking the slopes make for an ideal end to a day on the mountain. For a less rowdy, equally luxe experience, La Marmite serves up truffle pizza, venison loin, and shredded potatoes topped with caviar all enjoyed just a few steps off-piste.

WHERE TO PARTY: DRACULA CLUB

In the daylight it’s The St. Moritz Bobsleigh Club, the site of the only naturally frozen bob run in the world. Known as The Cresta Run, the club welcomes guest riders to experience the 90-second, 130 MPH rip through the course joined by two professional riders. At night, it morphs into Dracula, a members-only enclave first opened in 1974 by photographer and art collector Gunter Sachs. Today, his son Rolf Sachs remains its proprietor. A strict photography ban remains in place, and access is only granted by accompanying a life member, but despite the tough policies, Dracula is widely regarded as the best party in all of St. Moritz. 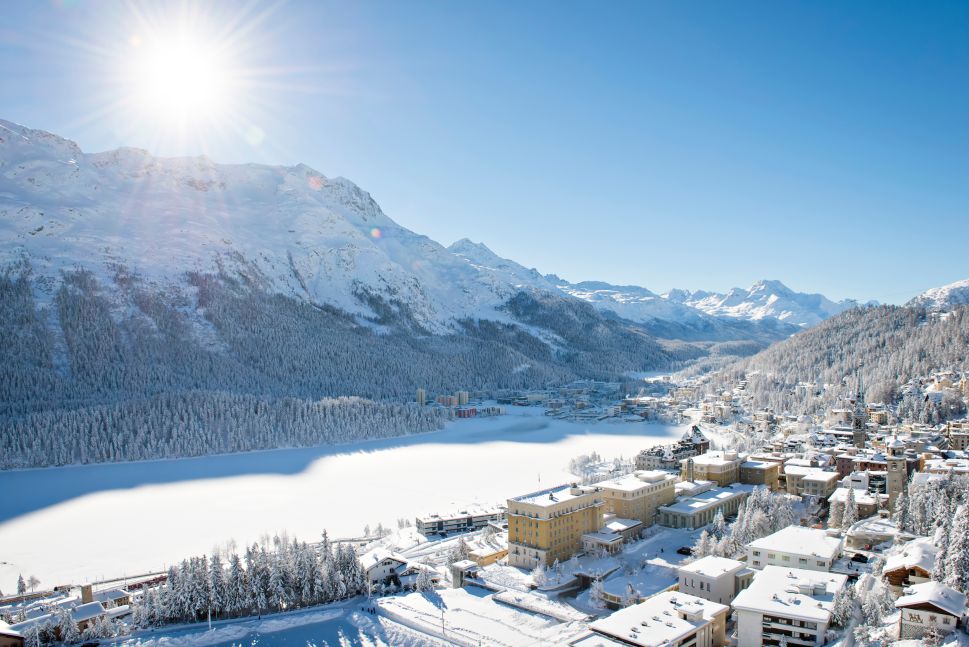