He was supposed to be killed off, but now he has his own spin-off series.

The character of Tom Keen originated on high action drama The Blacklist and now, after a reprieve from TV death, will headline the new series The Blacklist: Redemption.

John Eisendrath, who serves as an Executive Producer on both series, admitted during a gathering at the Television Critics Association to trying to orchestrate Keen’s demise. “It’s true that in the initial inception of The Blacklist, the character of Tom Keen was going to die, We considered it frequently, maybe more often than we should have, but the truth is, we never did it, in large part because [Tom Keen’s portrayer] Ryan [Eggold] was undeniable in his presence and his value to the show that the opposite happened – instead of writing him out and killing him, we just wrote more and more for him until it became clear that he was a character we could build a show around.”

In the new series, Keen is an undercover operative who joins Scottie Hargrave, the chief of an elite mercenary team, that takes on seemingly impossible missions. Seeking redemption for their past transgressions, this new group solves problems governments don’t dare touch as they strive to be a force for good and right dangerous wrongs.

Eggold isn’t nervous about headlining the new series, as he says, “I don’t feel too much pressure or anything so much as I feel passionately about searching for what this show is. I can’t wait to figure out this dynamic and see where the characters go.”

Explaining the narrative of the series and how it’s different from it’s predecessor, Eisendrath reveals, “Ultimately we strayed a long way from a potential father/daughter story to a mother/son story. We really stretched ourselves for that. In in this case, we’re telling, ultimately, a story for the audience to enjoy about an odd, weird, uncertain dynamic between a parent and child. So it’s a much different story and though it will be weird and twisted and have lots of secrets, I think [it’s] much more relatable to viewers.”

Jon Bokenkamp, also EP on both shows, says that the two series will interconnect in a unique way. “The 15th episode of The Blacklist feeds right into Redemption, so it’s a two‑hour block, and we’ll probably see Tom Keen walk out of one show into the next. Then, Redemption is on for eight episodes and right after that, we come back to The Blacklist. So these two shows sort of co-exist in the same world. They share a lot of the same DNA, and it’s essentially 30 episodes in a row of The Blacklist world.”

But, Eisendrath says that the two series, while intertwined, are still each their own entity. “I think Redemption stands on its own. It’s a world that’s independent of The Blacklist, and particularly in these first eight episodes, we feel that it’s very important to establish that world and to establish the dynamics of these characters.”

A marked difference lies in the tone of each series, says Eisendrath. “The Blacklist is a cop show in many ways. There are law enforcement stories. [Redemption] is a spy show. It’s an espionage thriller and that makes it a completely different animal. The stories we tell are different, and the places we go are different.”

Describing her character, Scottie, actress Famke Janssen, says, “I think she’s a complex woman, with many different layers. She has this incredibly soft and broken side to her that’s so beautiful and relatable. But, at the same time, this is a woman who operates in an extremely tough environment and she has to be strong. And, she’s ruthless, and she’s unpredictable, and we never quite know where we stand with her.”

Summing up what viewers can expect from the series, Bokenkamp smiled as he said, “This show really is sexy and, yes, there is a sense of fun. We want it to be a big, explosive, wild ride.”

‘The Blacklist: Redemption’ airs Thursdays at 10 pm e/p on NBC. 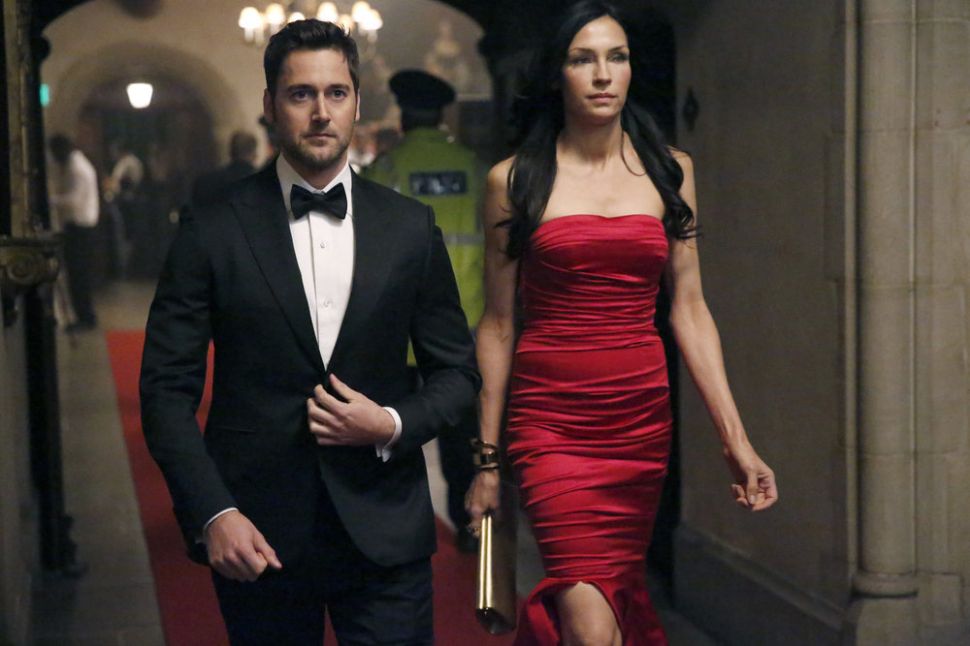