Maybe you thought you were going to be able to watch the first two episodes of The Good Fight, released for free to all viewers, and just walk away without getting a subscription to watch the rest of the season, but that’s not how things went down for me. I watched as creators Michelle and Robert King built up a new empire, only to destroy it, and was left on a cliffhanger at the end of Episode 2 as Maia Rindell (Rose Leslie) discovered that her mother Lenore (Bernadette Peters) was sleeping with her uncle Jax (Tom McGowan) while her father Henry (Paul Guilfoyle) languishes behind bars for his supposed role in a massive Ponzi scheme. Both brothers are blaming each other for the scam, and here comes Jax out of another room of the house, chest exposed and bare feet, asking where the tea is like a man who’s been in this house — and in this woman, ayoooo! — thousands of times.

Maia storms out of the house, furious at what she’s seen, and her mother follows her, trying to make excuses for what her daughter has seen, saying she’s trying to talk sense into him. Maia sarcastically asks what kind of sense that would be, and in my favorite line of the episode, Lenore shoots back, “What kind do you think?” Damn, girl. I don’t know if I believe her yet, but I do know that with just one line, I’m fully on board with the Kings, and I will follow anywhere they lead me.

We cut to an operating table, where a dentist is taking shrapnel out of an unconscious man with instructions over FaceTime from a doctor. As we watch the procedure, cops show up, and the advising doctor is arrested. It turns out to be Dr. Randolph Picot (Zachary Knighton), whom Diane Lockhart (Christine Baranski, love of my life) is representing in a malpractice case, and he’s been arrested for terrorism.

Elsewhere at Reddick, Boseman & Kolstad, we discover that one of the firm’s larger clients hasn’t yet paid their retainer for the year, and if they’re lost as a client, each of the equity partners will owe $300,000, a number that’s making Diane look like she’s sucking on a lemon the approximate size and shape of her still-missing capital payment. Marissa Gold (Sarah Steele) seems to be settling into her assistant position well, until a man stops by her desk with some questions about her impromptu mall-sleuthing the other day, getting the names for the class action. This turns out to be the firm’s investigator, whose name, according to IMDb, is Jay Dipersia (Nyambi Nyambi), although he hasn’t been fully introduced on the show yet.

Skipping back to the Rindell storyline, Maia now wants to go visit her dad in prison, so she can warn him that her mom and her uncle are setting him up — we doing Hamlet now, fam — which feels a little premature, given that she knows exactly zero things about this situation except that people lost money and her mom and Jax are boning, but sure. Her lawyer Yesha Mancini (Chalia La Tour) advises against it, and when she can’t get Maia to change her mind, agrees, but only if she can sit in on the interaction.

Meanwhile, in her first interaction with Dr. Picot, Diane is helping get us some much needed exposition: Dr. Picot is a member of Doctors Without Borders, and was helping these men perform a very delicate open-heart surgery in Syria over Skype, when Lucca Quinn (Cush Jumbo) shows up and demands to know if the doctor had known his patient was a terrorist. Apparently Lucca was sent over by Barbara Kolstad (Erica Tazel), one of the name partners at the firm, in a pretty transparent power play that she quickly admitted to when challenged by Adrian Boseman (Delroy Lindo), and Diane is pissed about it, but there’s not much she can do except go to court.

That’s where we meet Assistant United States Attorney Colin Morello (Justin Bartha), who will be facing off against Diane and Lucca on this case. He wants the defendant detained, as he was offering “material support to known terrorists” through a supervised heart surgery that not many physicians would be qualified to lead. It comes down to whether or not the doctor knew his patient was a terrorist, and when the judge rules that he did not, Dr. Picot is released. Unfortunately, that ignorance is going to be a lot tougher to prove the second time around, as he’s almost immediately back on Skype with the informal surgeons, giving them instructions as he darts around outside, trying to avoid the swarm of black-suited men who ultimately overtake him and again place him under arrest.

Boseman and Kolstad are having lunch with the man whose business hasn’t paid them their retainer yet, and he admits that they’re still looking around to decide on representation. He hedges, saying it has to do with the new administration without admitting anything explicitly, but Boseman suspects it has to do with their firm speaking out against Donald Trump, a suspicion bolstered by the man they see him having a second lunch with when Boseman and Kolstad come back up in the elevator to try to catch him: Andrew Hart (Ron Canada). He has a small firm in the Gold Coast neighborhood of Chicago, also minority-owned, and has the dubious distinction of having run a Trump PAC. So now the RBK lawyers are playing catch-up, and they need to find someone on their staff who voted for Trump.

Across town, Maia and her father are having a very awkward conversation with their lawyers present, attempting to exchange information without saying anything outright. Maia manages to get through to her dad, asking if he feels like he has anything to worry about, and his face changes. As he hugs her goodbye, he whispers details about Jax’s computer into her ear.

In court, again, there are power struggles between Diane and Lucca, and arguments between them and Morello, but the important thing is that the patient has only four hours to live, so we’re on a deadline, and Diane needs Marissa to find them a witness. Unfortunately, that’s not super-duper something she knows how to do, so she enlists the help of the investigator.

Elsewhere at RBK, the lawyers have found their Trump voter: Julius Cain (Michael Boatman). He’ll be doing the pitching, to try to save the firm their contract.

And don’t worry, we aren’t done building the sexual tension between Lucca and Morello yet. During a short recess, he insists that she split a burger with her, and she casually drops the word “metrosexual” at him, which I haven’t heard used unironically since the early 2000s. They promise that whoever wins buys the other a drink. Back in court, Marissa comes through with the President of the Medical Licensing Board of Illinois, who testifies that a doctor’s license can be revoked for abandoning a patient the way Dr. Picot did, albeit against his will. The rebuttal witness, a colonel, attempts to provide testimony about how battlefield conditions change things, but accidentally lets slip that the patient is a fighter for ISIS, so now we legally get to talk about who this person is. His name is Tariq Aboulafia, and he’s a U.S. Citizen. Dun dun dunnnn.

His family’s story is that he isn’t a terrorist himself, but his brother Aimar Aboulafia (Damon Owlia) is — he’s on America’s Most Wanted List — and that he flew to Syria to try to convince his brother to come home. Unfortunately, because he bought the airline ticket, legally Tariq was providing material support to his brother, a known terrorist. The judge agrees with the letter of the law, if not the spirit, and rules that Dr. Picot must stay in custody.

Meanwhile, in Fancy World, Maia goes to visit Jax, who is of course still insisting that he was set up by her dad, not the other way around. While Marissa distracts Jax with a phone call in the other room, Maia logs into his computer and snaps photos of three documents entitled “The Shtup List”.

Back in Syria, the plot thickens, as Aimar shows up at the clinic where his brother is being operated on and begins threatening medical staff, saying he will kill them if they don’t operate on his brother. This changes the situation, obviously, as the immediate safety of the medics loom larger than the theoretical harm and good provided by a plane ticket, so the judge rules in favor of Lucca and Diane, and they give each other a congratulatory handshake that promises a season chock full of support and female friendship.

In the RBK office, everyone was really excited when it was revealed that Julius secured the contract for the office, but he has a visitor who says that the elation won’t last: Andrew Hart. He warns Julius that if he really did vote for Trump, he’s in for a lonely life, and leaves him his number for when he starts to get ostracized by his peers. Which, as it turns out, is already happening; his coworkers are starting to give him evil looks through the firm’s glass walls.

Back at the bar, Lucca and Morello are meeting up to decompress, and she’s negging him hard, picking out someone else in the bar for him who she says is more “appropriate”. While the two are talking, a report comes on TV that a U.S. air strike has killed Aimar. Morello realizes that he was used, and that the delay was an intentional tactic to draw Aimar out of the woodwork so he could be killed in the strike, that of course also took the life of his brother Tariq.

And finally, Maia meets up with her father to present him with the photos, and the plot thickens once again, as he gets excited to take down Jax, but can’t guarantee to Maia that it won’t also harm her mom. I don’t have a feel yet for who’s telling the truth here, but I’m loving the ride. 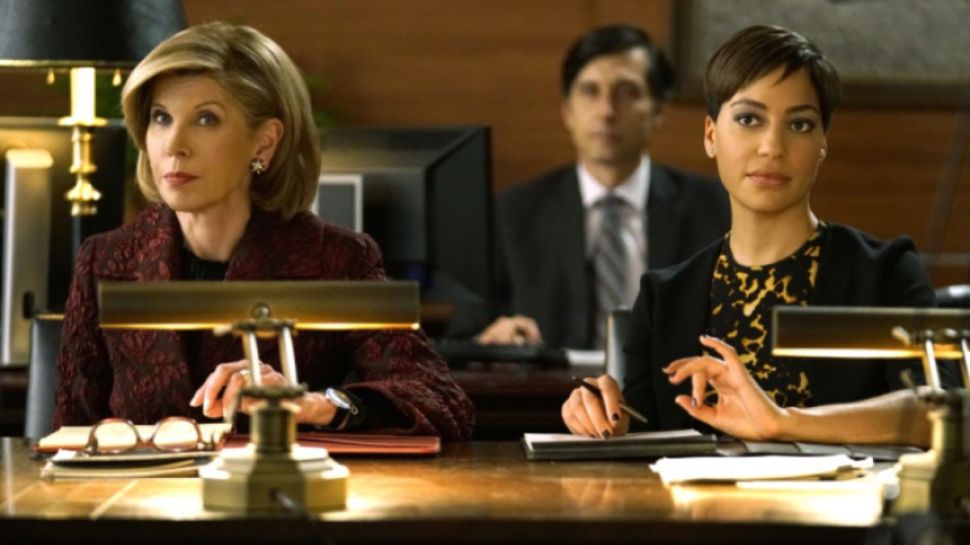