Last week saw the premiere of the second season of The Magicians, the SyFy series based on Lev Grossman’s trilogy of fantasy novels that have been described* as “Harry Potter meets Rules of Attraction.” Now, I’ve been a big supporter of the risks taken by showrunners John McNamara and Sera Gamble in changing seemingly vital parts of the story from the books in order to make The Magicians as a TV series its own (for lack of better word) Beast. This week’s episode, “Hotel Spa Potions” really showcases both the best and worst elements of deviating from an UR-text, and I’m sure fans of the series will be as divided on this subject as our angsty protagonists are about…well, seemingly everything.

What worked for me:

In the quest to defeat the Beast (aka Martin Chatwin), Quentin, Margo, Penny and Alice travel back to Brakebills from Fillory to learn some battle magic, leaving Eliot the reigning king of Fillory. And boy, does separating Hale Appleman from the ensemble cast really give that man a chance to shine. Now wed to a peasant girl, the sexually ambidextrous Eliot at first treats his newfound aristocracy with the same bored entitlement that would make Marie Antoinette proud. First order of business–well, after removing the desiccated corpse still sitting on the Fillory throne (the result, we learn, of a curse laid by the Beast to prevent anymore Earth Children from Narnia LARPing)– is locally sourcing Fillorian champagne! “Which I know isn’t technically champagne,” Eliot says, taking his first royal sip, “Though I am renaming the gardens Champagne Nouveau.” Ugh, classic Eliot. Immediately, there’s a problem: the alcohol, like a lot of things in Fillory, is better in theory. According to his child-bride, turns out Fillory is incapable of growing ANY crops. The people are starving, and Eliot is furiously sober, so it takes him approximately ten minutes to divulge to his new lady-friend his secret shame that he’d apparently never divulged to anyone before last year: far from being the libertine he presents in public, Eliot actually grew up on a rural farm, not a cosmopolitan penthouse. In a plot-twist straight lifted from Mike Judge’s Idiocracy, Eliot’s tour of the ground reveals that the Fillorians have no idea what manure is, and it’s up to “The King of Shit” (as Eliot dubs himself) to teach his new subjects about agrarian best practices.

Quick question: is the Fillorian food shortage due to the Beast’s curse? If not, how did the humans on Fillory ever survive without learning how to make food for themselves? I like the idea of the Beast/Martin setting up little tests for would-be monarchs that actually forward the idea of them being good leaders.

Speaking of which, I’m also really digging this extended storyline of the Beast, which wasn’t given in the books, where he’s more of a Loki figure than a Big Bad. Now teamed up with Julia to find and destroy her rapist, the which-murdering God Reynard, Charles Mesure brings a welcome dose of frivolity to the show as Chatwin. He doesn’t seem like such a bad guy after all! Sure, he’s annoying–dude will not stop singing top hits from Meet Me In St. Louis, which we can all agree is a completely diabolical form of torture–but his interest in Julia seems to go beyond simple “I have to do what you say or you’ll kill me with that magic knife.” As he and Julia work together and grow a grudging respect for one another, you can see the nuances of a character drawn in such broad strokes that the original narrative had his features literally obscured by a veil of moths for 99 percent of the story.

To catch Reynard, Chatwin tells Julia she needs to find another witch to summon him; human bait, essentially. Julia tries Marina, who…would not be my first choice. Sure, the Boss Bitch Hedgewitch in New York ultimately redeemed herself last season by taking pity on Julia after Reynold’s rape and murder rampage, erasing her memory and filling it with something less gruesome. But Marina’s not a team player. She murdered Kady’s mom, she convinced Julia to trap Quentin in a mind-asylum, and she left Julia to rot in an actual one. And, predictably, she’s not going to let herself be the honeytrap for a God-monster, just because another monster told her to. She’s out. Or wait, no, she’s in, but only after a quick trip to Brakebills to ask Dean Fogg for asylum, which he refuses to grant. I would have gone with Kady over Marina on this one, but who knows where that witch is these days.

The scene where Quentin meets up with Julia to warn her that he and his Brakesbill buds are planning to strike at the Beast at any moment–Alice’s God power from Ember is waning, and they need to kill him before he can suck all of the magic out of Fillory, and thus, the world–and she should stay out of the way was also great. Perfect example of two characters who both truly believe they are fighting to Save the World, but have now come to a seeming impasse: Julia needs Chatwin alive to kill Reynard before he can murder/rape any more magicians, and Quentin needs Chatwin dead to save the existence of Magic. Like contestants on The Bachelorette, they hurl accusations that the other isn’t there for the right reasons and only motivated by revenge, but honestly? Between saving magic and saving actual people from horrifying murder and sexual assault, I land on Team Julia. Mostly because A) Quentin is working off a theoretical (that the Beast does indeed plan to consume all the magic in Fillory via fountain , or something) and Julia is working off actual, first-hand knowledge of the very real threat Reynard poses to the world, and B) because Quentin and Co. CAN afford to wait. Yes, Alice might lose some of her Ember bracelet power, but as we’re learning, there are a lot of other ways to keep Beasts at bay. Gods? Not so much. It’s REALLY hard to kill a God.

Now, what didn’t work for me:

Penny’s whole “enchanted hands” thing. If you’ve read the books (spoiler alert!), you know Penny’s going to lose both hands anyway. And the season finale had the Beast chopping them off. Adding several episodes worth of dancing around this eventuality seems like padding. Though I do like how it takes him back to Pearl, because their relationship is finally starting to coalesce into something other than “impertenant student/sexy Dom librarian.”

Also not the hugest fan of the whole Bigby storyline, when we already know from Harry Potter that any wizarding school has to include at least ONE class in Battle Magic to be worth it’s enchanted accredidation. And what was with Bigby and Dean Fogg? Was he under her pixie spell, or do those two actually have a history?

Though, yes, I did like that we’re finally getting to those dope demons embedded in our protagnists’ back and held in place by a protective tattoo. That was cool! Anything involving magic tattoos is A+ in my book.

What I feel relatively neutral about:

The concept of “shade,” which Martin offers to remove from Julia in order to help her catch Reynard. Ostensibly, “shade” is not just throwing down ice-burns at someone, but the intangible something-or-other that keeps you tethered to your humanness. Has Martin removed all his shade? If so, does his offer to Julia stand as an attempt to gain some semblance back for himself? Or is this going to be a belabored metaphor for a soul that The Magicians uses a couple times and then dispatches when it’s no longer necessary to differentiate between who deserves our sympathy and who doesn’t? I smell a Buffy-esque “chip in the vampire’s head” kind of twist coming with this, especially knowing where Julia’s character ends up in the series. But hey, only time will tell! 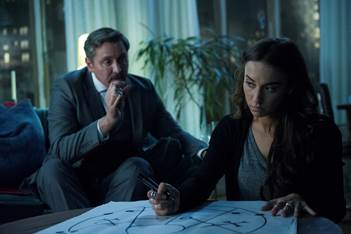