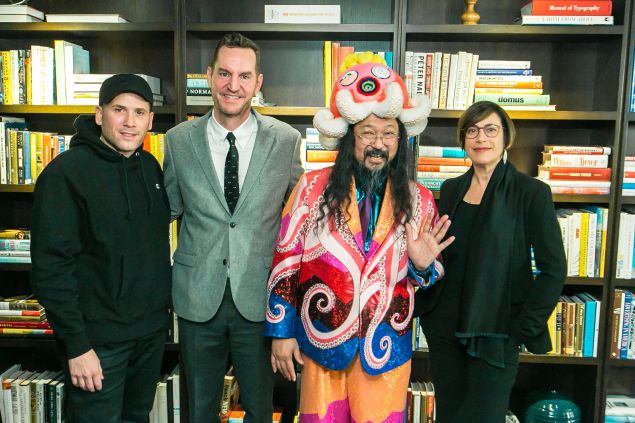 “My painting is a never-ending story,” Takashi Murakami muses. It’s ten-o’clock in the morning and the Japanese artist is comparing his creative output to that other Murakami, the creator of The Wind-up Bird Chronicle. It’s also worth mentioning that he is dressed as a kind of dapper octopus: A plush, pink cephalopod headpiece; a nicely tailored blazer ornamented with images of flailing, multi-suckered tentacles. There are various reasons for this. “For two years, I’ve been wearing really odd suits,” Murakami explains. “My English communication is not good, and I want to cover for that.”

But the octopus also nods to the artist’s forthcoming, painting-heavy retrospective at MCA Chicago, opening June 6; it’s titled “The Octopus Eats Its Own Leg,” and will showcase not-yet-completed 2017 canvases as well as a handful of early works made in the 1980s, and many things in between.

Murakami is in New York to stoke excitement for that exhibition, hence the morning’s costumed press conference at Neuehouse. But staffers and curators from MCA Chicago are here to embed that summer show within a larger vision for the institution—one that is splashy, populist, and occasionally a bit tough to wrap one’s tentacles around.

First off, there’s the looping Pharrell soundtrack heralding the morning’s announcements. There’s never a good time to hear “Happy” on repeat — and on a Friday morning in Trump’s America, it seems like nothing less than a sly, sick joke — but there’s a point to the Pharrell, the point being that Pharrell is the just-announced guest entertainer at the museum’s 50th anniversary artEdge gala this summer. This is explained by Madeleine Grynsztejn, MCA Chicago’s director, who—and I realize this is, like, her job—evinces an almost messianic boosterism when discussing the museum’s impending future. She’s talking about Complex Media, whose founder Marc Ecko is in the front row, and which will be involved in some TBD collaboration with the Murakami show. (Murakami got into Complex because he was really into Kanye West, and Complex’s Facebook page was really into Kanye West news. Ecko is dressed head-to-toe in black and peppers his speech with phrases like “taking a meeting,” “an all-boats-rise situation,” “1+1=3,” and “brainfart.”)

Grynstejn lauds Murakami as someone who “redefines what it means to be a global contemporary artist today,” and then proceeds to explain how a museum like MCA Chicago might concurrently redefine what it means to be a global contemporary-art institution. We see slides of Carsten Höller’s big metal slides. We see some statistics, courtesy of the N.E.A., affirming that 73% of audiences go to a museum to “socialize with friends or family” (63 percent of them visit “to experience high-quality art.”) Things get a bit squirrely once Grynstejn starts talking about so-called “third spaces” — like the Ace Hotel’s lobby, Starbucks, and the Apple store — all of them “anchors of community,” and perhaps models for cultural institutions to learn or borrow from. There’s no time to get all huffy about this — elitist eggheads, check yourself! — because now we’re on to the MCA’s forthcoming renovations, which include a farm-to-table restaurant whose interior, soup-to-nuts, has been designed by Chris Ofili. “Young people today want more than just to look at art,” Grynstejn affirms.

And hey, that’s probably, definitely true. But all of these developments — or at least this way of talking about them — can seem a bit funny, especially considering the seriousness of MCA Chicago’s programming. Michael Darling, who is helming the Murakami exhibition, has put together a crack curatorial team whose expertise amply covers Latin-American, African-American, and Middle-Eastern practices. Museum visitors now or in the near future can see work by Basim Magdy, Merce Cunningham, Lina Bo Bardi, and Michael Rakowitz. In many ways, the summer’s blockbuster show with Murakami — an artist who has never been precious about the dividing line between ‘fine art’ and commercial output, and who recalls that his earliest creative projects involved simple t-shirts — seems a way of navigating the ongoing identity crisis that all major museums inevitably suffer through as they compete for eyeballs. 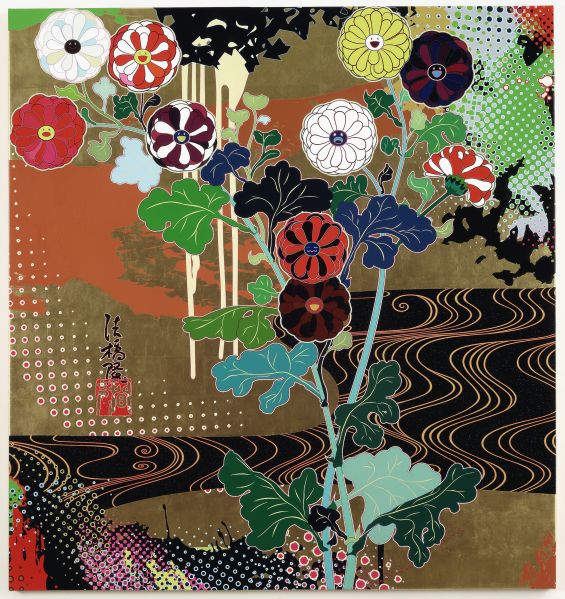 After the press conference I had the chance to sit down with Murakami one-on-one for a quick interview with a translator. (The artist, still in his octopus outfit, closed his eyes when responding, a flurry of Japanese interrupted by the occasional Englishism or proper name: CGI; Sotheby’s; Daft Punk). We had just heard a whole lot about the museum needing to evolve into a third space, a something-for-everyone utopia that contained art, but wasn’t only about art. What did Murakami, I wondered, expect from his own museological interactions? “To be completely honest, I am only focused on the artwork,” he said, proving himself to be a statistical outlier with little or no concern for farm-to-table amenities. “I’ll make a beeline for a specific artwork — and that’s my relationship with the museum.”

Then again, that might just be because Murakami is an exceedingly busy guy — not one to loiter in a cafe, Instagramming the Chris Ofili draperies. It’s this manic productivity that he likewise admires in Kanye, who will appear in the MCA exhibition in the form of an anthropomorphic bear sculpture and a few attendant paintings. Murakami is also in the midst of creating an anime show for television, and working on various film projects, all while finishing up the final paintings that will be shown in Chicago. “In creating a film there are so many different elements you have to absorb: music, sound effects, actors,” he says. “I have to research and be on top of the current CGI, the movie industry, visual art, fiction, novels—what’s in, what’s being received well.” That all sounds frankly exhausting, and it suddenly makes sense why Murakami starts to imagine himself as a kind of hulking, frantic octopus. “I’m just pouring all of the money I make into these projects,” he says, “like I’ll eat my own essence, and nothing will be left. It’s a self-deprecatory view. But even if I lose all my octopus legs — if I can leave something that will last, that will be meaningful.” 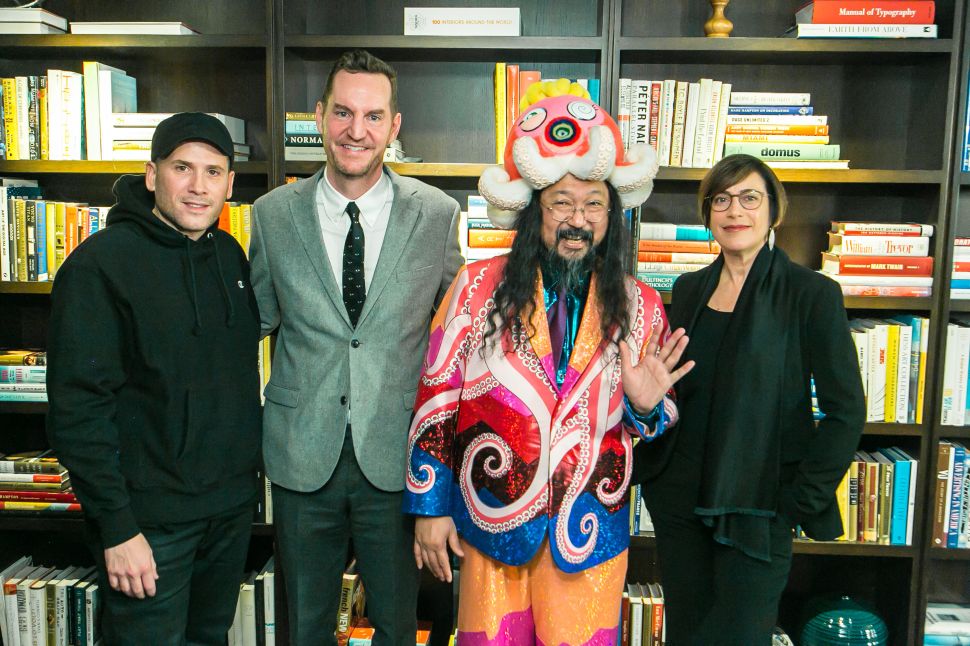