You’ve probably seen them on Instagram: long nails covered in more Swarovski crystals than you could ever imagine or Hello Kitty faces protruding out of a French mani. This kind of nail art is intrinsically Japanese, and in New York City, there are only a few nail salons that can create some of those insane fingernails seen on the streets on Tokyo. These nail salons mold 3D creations by hand, in a process that will take at least a few hours0. These salons don’t often advertise these offerings, but a true nail art fan will know where to go. I first learned about these cult nail salons from a fellow Parsons student, who regularly wore nail extensions with colorful piercings and gems—these details are proof of serious dedication to the art of, well, nail art.

So I took it upon myself to try out the experience of pierced, blinged and 3D nails at one of the salons in the city that specializes in delivering intricate digits: Marie Nails. Not knowing much about the process, I called up the salon beforehand and described exactly what I wanted: nails as extreme as possible, starting with a base of glitter gel, topped off with 3D artwork and lots of crystals. Initially, they couldn’t give me a price over the phone. They only said it would cost over $100, and that I would have to bring in imagery to show the nail artist during my appointment, who would then come up with a pricing scale.

I scoured Google images and Instagram looking for the perfect reference point, eventually deciding on a mani that incorporated 3D Hello Kitty with Hawaiian flowers, ice cream cones and shooting stars. I also wanted one nail on each hand to be covered in as many Swarovski crystals as possible.

Upon arrival, I was handed a keychain of gel swatches. Marie Nails uses Calgel, a Japanese gel system that’s designed to be more breathable than traditional gel nail polish. As a bonus, it’s also supposed to promote nail strength. I ended up choosing a different glitter gel for each nail: silver, periwinkle, pink, lavender and dark pink. The application of the polish was pretty standard and similar to your typical gel nail session. The only difference I noticed was that the gel seemed stickier than usual—but that was resolved by the end of the manicure, when the whole creation was fully cured.

After the gel was applied, my nail tech brought out a variety of different powder mixtures as well as acrylic paints—yes, the kind you find in art stores—and paintbrushes. She began mixing different powders to create custom colors before applying tiny droplets to each nail and sculpting the designs. The acrylic paint was used to draw Hello Kitty’s precise facial features, all by hand.

Marie Nails prefers doing designs on natural nails as opposed to a fake nail or nail extension, which sort of limited my choices, since my nails aren’t very long. For example, I had to settle for just Hello Kitty’s head, because her body wouldn’t fit on my stubby nail beds. A word of advice: grow your nails out if you want to try one of these extreme styles.

After over two hours, I had 3D designs on all of my nails, except the ones that were smothered in crystals. My nail tech pulled out a drawer that was stuffed with tiny containers full of Swarovski gems—none of the crystals were big enough, until I came across ones that took up almost half of my entire nail. The cost? $12 each. 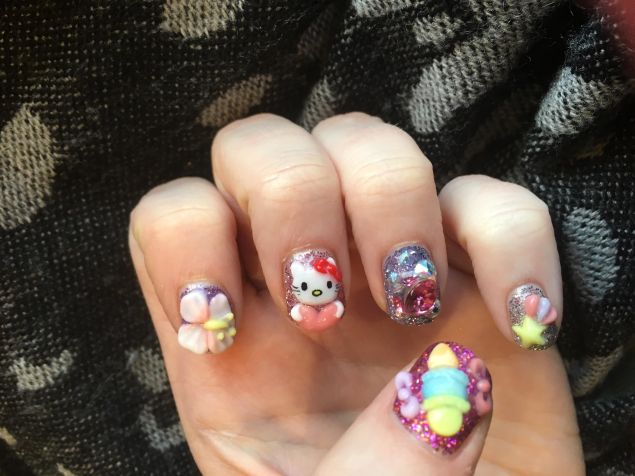 My entire appointment lasted almost three hours and totaled $150 (before tip!!). Considering the average gel manicure in Manhattan averages around $50, an extra $100 isn’t much of an increase for the amount of work it took to get the final look.

And though I wasn’t completely sold on Calgel in the beginning, nearly three weeks later, my nails have not chipped at all—and trust me, they got their fair share of being banged around during New York Fashion Week. The only sign of wear is that one of Hello Kitty’s eyeballs has somehow washed off.

If you want some fancy nails of your own, here’s a list of places in New York City that offer Japanese inspired hand-sculpted 3D nail art and Calgel: 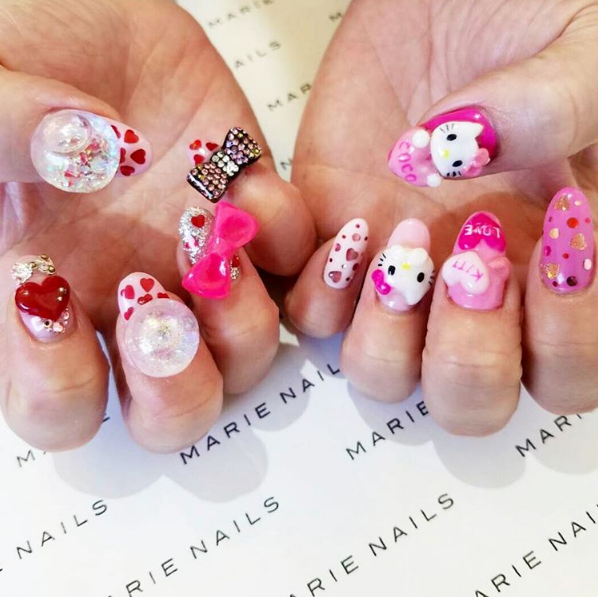