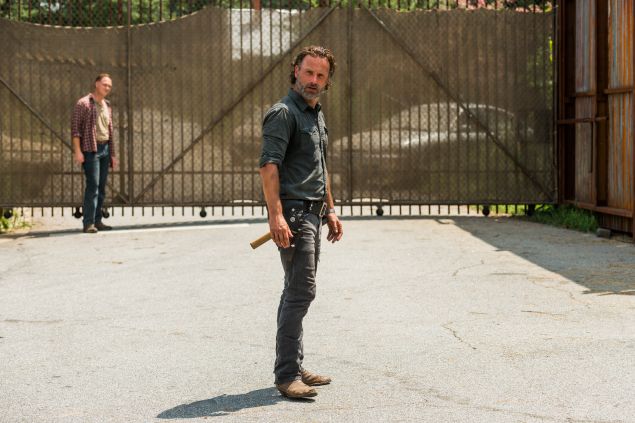 I really do not envy the writers of The Walking Dead. In their pursuit of ever-more-dire circumstances to strand their heroes in and increasingly evil foes for them to face off with, they’ve now written themselves into a hole that there just doesn’t seem to be any narratively satisfying way to climb out of. (See also: Buffy season seven.)

I mean, at this point, they can’t make things get any worse without finally turning off even their most masochistic fans. So there is only one path forward: Having Alexandria band together with other communities and fight back.

But because that is the only option available it all begins to feel a little rote. So despite the fact that this episode had all of the things we generally love about a TWD episode—characters actually doing something for once, emotional confrontation heightened by extreme circumstance, cool new ways of killing walkers—it is hard to muster a lot of excitement here.

Except for the episode’s strange ending, and Father Gabe’s odd nighttime activities leading up to it, everything that happens now was basically preordained; these dominoes were set up a long time ago. We knew Gregory was going to be too craven and stupid to agree to join the fight. We knew that some of the Hilltop residents, who all love Maggie now, would volunteer anyway.

It should have been extremely satisfying to see Rick & co. learn about the Kingdom and meet Ezekiel for the first time, and indeed, their incredulous “King?” was worth the wait (as was Jesus’ “oh yeah, I forgot to mention the tiger”). But again, it was overshadowed by the sense that the scene had already played out in our heads. We know Ezekiel doesn’t want to fight. We knew Morgan would give wishy-washy “let’s not kill anyone” counsel, giving the king a good push that direction. We knew that head knight Richard would see things differently, as would Morgan’s young protégé Benjamin (a relative newcomer who the show is pushing really hard all of a sudden as an important and sympathetic character, which can only mean one thing: sorry about your upcoming gruesome death, Benjamin). And we knew Carol would keep her distance.

But then, with only about 20 minutes left, we do start getting some glimmers of interesting and unpredictable developments. First we hear Negan’s eulogy for Fat Joey over Jesus’ stolen walkie-talkie, which is cool, and an awesome way of continuing the season’s main overarching theme: that Negan is really everywhere, suffusing everything. He doesn’t even appear in this episode, but there he is anyway, all around you in the air, if you just have the right device to tune in.

Our heroes hear the speech as they drive away from the Kingdom, having been denied by Ezekiel, and leaving Daryl behind in one of the only places he can successfully hide from Negan. Driving up to one of the Saviors’ roadblocks, they begin to clear it when they spy a trap set with explosives, a bulwark against an approaching herd of walkers. This is apparently what they were rigging up two episodes ago when that guy Mark played hooky on the job and got his face burned off for it. And it’s still unclear what the purpose of this trap thing is—to redirect the herd away from the Sanctuary? (But wouldn’t huge explosions just attract more, while also clearing the way for them to get through?) To use the herd as a weapon against some other community? To have some fun seeing what happens when walkers run into a dynamited length of steel?

Whatever it’s for, the Alexandrians know that this is their chance to score some real weapons for use in their upcoming battle. They’re down to just two guns and a bunch of axes and knives now (actually, scratch the axes and knives, since Gabriel stole them all at the start of the episode). A bunch of dynamite and RPGs could really turn the tide.

Luckily, they have Rosita’s military expertise (not only can she defuse a bomb, she can look at a stick of dynamite and decide—correctly—that it’s wonky). Unluckily, Negan has just discovered that Daryl is missing, and so they have to get back to Alexandria in a hurry to pretend they know nothing about it. Also unluckily, that herd of walkers is now approaching.

Apparently the only solution is to drive the two cars that have the steel cable strung between them through the herd, decapitating hundreds of them at a time. It’s one of the more satisfying scenes of walker-carnage yet (on par with that ludicrous helicopter scene in 28 Weeks Later).

What comes right after is just downright dumb, though, as Rick and Michonne are for some reason forced to push and shove their way through the next wave of the herd to get back to the car. If there is one thing this show has established in six and a half seasons, it is that it’s generally possible to fend off a single walker with hands and feet, but if you find yourself surrounded by them, you’re going to have to desperately hack and shoot your way out, or else you’re just a bag of spurting blood and organs. But nope, here they are in the middle of hundreds of them, and the just sort of bull their way through? Michonne doesn’t even draw her sword. It’s like they changed the rules for one scene, and for no apparent reason.

Rick’s understandably shaken, but they make it back to Alexandria in time to meet Negan’s envoy Simon and pretend they know nothing about Daryl’s escape. The Saviors trash the place looking for him—and that’s when they discover that Father Gabriel snuck off in the night with every last bit of their remaining food.

It’s not clear whether he really just stole everything and ran, but that’s certainly what it looks like. Until Rick discovers a note: Boat. They never told Gabriel about their adventure on Lake Zombie, but somehow he’s leading them there. When they arrive, they discover a group of very menacing, very armed people. It seems Alexandria is about to meet a brand new community. And Rick, he’s smiling, for the first time in what seems like forever. Hell, he’s grinning from ear to ear. 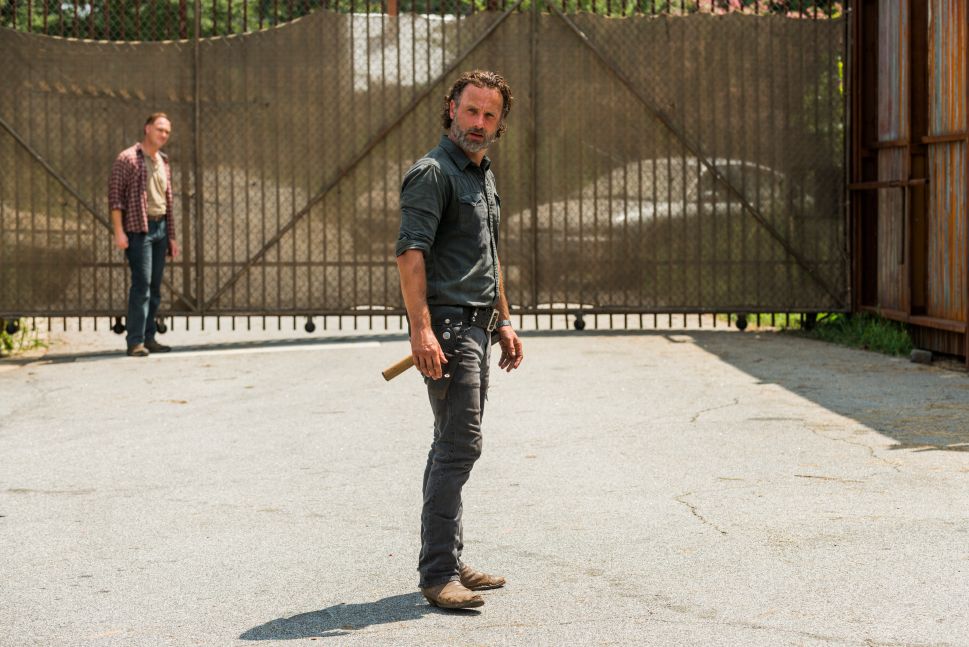