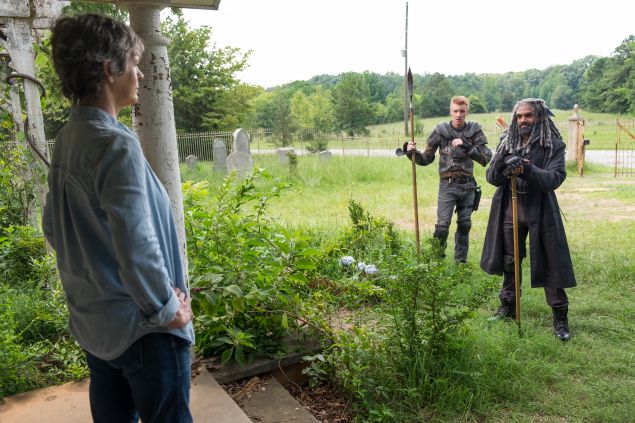 Welcome to the junkyard, baby.

The huge group that Rick & co. met at the end of the last episode, they apparently live in a landfill, in and among literal mountains of trash. For some reason, Rick doesn’t see this as a massive red flag.

Probably because after semi-rejections by the only other two communities he knows, he thinks he has finally found himself an army. And he has, after a fashion, but first, he has to contend with the utter weirdness and amorality of this new group.

These weirdos—we’ll call them the Junkyard Gang—are, among other things, a fun little riff on the tropes of post-apocalyptic fiction. These people dress all in shades of black and gray, with metal accents like greaves and gauntlets. Their leader, Jadis, talks in clipped, telegraphic, almost oracular phrases, and the rest speak rarely or not at all. They have not-quite-name names like Jadis, Tamiel, and Breon.

We’ve gotten so used to the Mad Max-ness of it all that we hardly notice these elements of the genre anymore. They’re just so common when an unspecified amount of time has passed since whatever cataclysm, culture in these stories seeming to devolve in these very specific ways. But seen here, only a few years after the zombie apocalypse started, it all just seems ridiculous and contrived. We’re in northern Virginia; three years ago these people were all going to work, eating dinner with their families, watching TV. And now they say “your words now” when they want someone to speak? Really?

The Junkyard Gang has this obscure philosophy—“We take, we don’t bother”—which seems like an isolationist version of Negan’s credo. Instead of risking their lives to get the plunder from the houseboat on Lake Zombie, they sat guard on it until someone else was reckless or desperate enough to do it for them. They followed Rick and Aaron back to Alexandria but were too late to prevent the Saviors from stealing it first. So instead they waited until the dead of night, nabbed Gabriel, and forced him to take everything else that was left in the pantry. He managed to jot off a clue, and that’s how we all ended up here surrounded by mountains of garbage.

Rick chooses to see this as an opportunity rather than a threat, and as unwise as that at first appears, it is definitely a bold move for a guy who has seemed rather short on them lately. And it does appear to pay off, at least tentatively. After some tense moments in which Jadis declares that the Junkyard owns them now and they skirmish a bit—Gabriel really showing his newfound mettle, grabbing a knife and holding it to Tamiel’s throat—Jadis agrees to at least parley with Rick. She brings him to the top of their highest mound of trash (called “the up up up,” because these people are the absolute worst) and tells him that maybe it is time for her people to change. But then she pushes him off the hill and into a pit with a gladiator zombie.

They’ve outfitted this dude with a helmet and a suit of spikes, making him a pretty formidable opponent, and Rick’s not quite smart enough to figure out that the best course of action here is to bury the thing in a trash avalanche. Luckily Michonne isn’t an idiot and guides him through.

In the end, it was all a test (I think; nothing is ever clear with these toddler-speaking weirdos) to see if Gabriel was right, that Rick and his people can do anything. It becomes a starting point for negotiations, which proceed in elliptical idiot-speak until finally an agreement is reached: If Rick and co. can procure “a lot” of guns for the Junkyarders, they will agree to fight the Saviors with them. Alexandria will get back half of the food the Junkyard stole from them, and the Junkyard gets a third of whatever loot they take from the Saviors. Done and done. It’s not the best deal, but getting rid of the Saviors is Rick’s only goal.

Now: Where to find a huge cache of guns? Rick suggests Tara, who’s explored the area the most, might have the best idea, and so now she has to decide whether to keep Oceanside a secret or to confirm their worst suspicions of her after all.

Meanwhile, back in the Kingdom, matters with the Saviors are slowly but surely escalating, much to the dismay of both Ezekiel and Morgan. Less upset is Ezekiel’s head knight Sir Richard the Foolhardy, who is itching for a fight. Having failed to get Morgan on his side, he finds a sympathetic listener in Daryl, and enlists him to help to force things to a head. The plan: get the Saviors to do something Ezekiel can never forgive, thus making him reconsider joining Rick’s war.

It takes Daryl a while to understand that the unforgivable sin Richard has in mind is to have the Saviors attack Carol, whom Ezekiel has developed obvious feelings for. In Richard’s mind, Carol’s just out there waiting to die anyway, having removed herself from society, and so why not have her sacrifice benefit the greater good.

But of course our boy Daryl doesn’t see it this way; he beats Richard up to prevent him from going through with the plan, and then threatens him to make sure he doesn’t try it again in the future. Then he goes off to reunite with his long-lost friend.

After the heartfelt hugs and the tears, Carol explains in more detail why she had to leave: She can’t help acting to save her friends through her talent for violence, but that path would eventually drain whatever is left of her humanity. So instead she chooses to live apart, where she doesn’t have to be around those she cares about, and thus has no need to protect them.

And now Daryl has his own moral dilemma to deal with: whether to tell Carol about Glenn and Abraham. As Morgan astutely points out, if Carol knew the truth, she’d be right back in the Kingdom, convincing Ezekiel to fight. This is the outcome Daryl wants—the one he’s begging Morgan to fulfill instead—but here case the price is too high. If she knew that her friends were dead, Carol would be at the head of that army, and at the cost of the last shreds of her soul. So he decides to hide the truth from her. All hunky dory back in old Alexandria. You betcha. 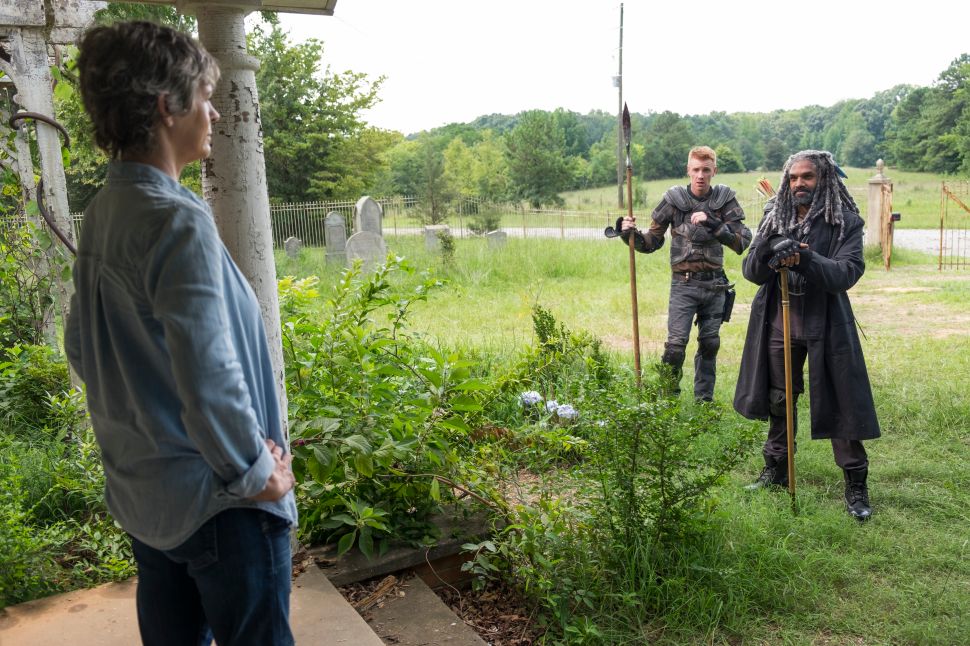