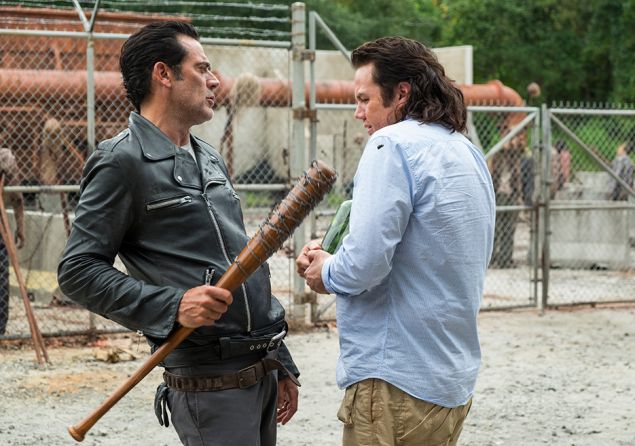 For at least a season now, a question has been needling me, a riddle lurking at the edges of the story of The Walking Dead: How, exactly, does Negan inspire such absolute loyalty and devotion among his followers?

It’s easy to understand why people obey Negan—he’s terrifying, powerful, and unpredictable. But time and again we have seen that the Saviors don’t just follow Negan, they are dedicated to him. A level of trust exists between them that allows Negan to extend his empire to far-flung outposts and enslaved communities. When his people declare “I am Negan,” it’s not only to create the chilling sense that he is everywhere (though it certainly does that)—it is a declaration of faith. He’s their messiah; they are his living embodiments in the world at large.

But how did he get them there? Some of Negan’s people were presumably once mercenary survivors looking for a community and a leader. But clearly many of them were once workers toiling away at Sanctuary (like Dwight) or captives from communities they conquered (like Daryl, and now Eugene). How do you take someone who is terrified of you, who hates you, and rebuild them into a loyal follower? “Hostiles and Calamities” is devoted to showing just how it works. And man, is it a doozy.

It helps, of course, that the episode focuses on Eugene, who, while a member in good standing of Alexandria for a long time, we know to be a coward, a liar, and an opportunist—all qualities that he puts on full display in his first days at Sanctuary, and all of which Negan is able to bend to his purposes.

Eugene enters the compound flinching and stooped, skittish as a calf, expecting death or torture around any corner. But instead of being thrown into Daryl’s dank oubliette, he’s ushered into the well-appointed apartment Daryl briefly glimpsed next door. It’s got a shelf of books, a fridge full of beer, eggs, and fresh produce—and a door that locks from the inside.

The contrast with Daryl’s treatment could not be more stark. (The show goes a step too far in having Eugene press play on the stereo and hear that damned “Easy Street” ditty, which just seems lighthearted and silly in this well-lit room, rather than an implement of torture.)

Negan knew that Daryl was too strong and tough to simply be seduced to the Dark Side; he needed to be broken like a wild horse. But Eugene is another story altogether, and Negan sees how he can turn his fear into loyalty. They tell him he can take what he wants from the workers—subtly giving him a taste of the power that a weak man craves, while also showing him the creature comforts that could be his when he joins up. And slowly we watch Eugene transform from terrified mewling to imperious bullying.

Negan suspects Eugene has a lot to contribute, but he can’t be sure he isn’t “just some guy” who figured out how to make a bullet. Eugene, true to form, falls back on his old lie of being a geneticist. He thinks it’s a lie he has to tell to survive, and he may be right (Lucille is there looming should he actually turn out to be useless to them). But Negan is also playing on Eugene’s vanity about his intelligence, puffing him up, which makes him not only more open to Negan’s recruitment, but also eager to volunteer his talents, rather than having them wrested from him.

So Eugene comes up with a clever and “badass” solution to one of Sanctuary’s security issues—cover the guard walkers with molten metal—and immediately begins to be accepted as a probationary Savior.

It’s easiest to track Eugene’s transformation via his shifting relationship with the three members of Negan’s harem (Ricky, Tanya, and Amber), a platonic evening with whom is Eugene’s reward for his ingenuity. At first he’s apprehensive, afraid to look directly at them, and terrified they’ll see through his charade. Then he begins tentatively to show off, Mr. Wizarding some minor explosions in the courtyard to their delight. Next time we see them, he acts as their equal, a co-conspirator in their plot to euthanize Amber. And finally, he rises above them. Having learned something about the way life in the compound works, he realizes what they really need him for (to murder Negan) and how little he needs them in turn.

This dawning understanding comes as a side effect of the episode’s parallel plotline, the story of Dwight, and his own ongoing transformation. Dwight’s story gives us a glimpse at what happens when someone has gone from rebel to loyalist and comes out the other side. Though he’s still outwardly very much Negan’s man, all is not well in Dwight-ville.

Having been the one assigned to break Daryl’s spirit—to turn him to the Dark Side with less carrot, more stick—Dwight is initially blamed, and beaten, for Daryl’s escape. But it turns out to have been Sherry, Dwight’s ex-wife, who slipped Daryl the key. Realizing this, Negan sends Dwight after her. In a note left behind in their old house, Sherry says she blames herself for taking Dwight, a kind man, and making him into a Savior-monster by way of saving his life. She knows the only way he can survive now is by forgetting the good man he used to be, which is why she had to let Daryl go—he reminded Dwight too much of the heart he once had.

This is, of course, the dominant theme of The Walking Dead, and this is perhaps its subtlest and richest expression yet. Instead of beating us over the head with the fact that Rick has to harden his heart to lead, etc. etc., it shows us a man caught in the shifting winds of a personality that is changing as the world changes. A man who is kind one day and hard the next, who has to determining what kind of person he has to be at every moment. It’s sort of breathtaking (as is Sherry’s letter).

The doctor who treats Dwight’s wounds makes some offhandedly cruel comments on the same theme, that Sherry’s good heart meant she had no place in this violent world. Which gives Dwight all the pretext he needs to frame him for Sherry’s escape, protecting both Sherry, who’s still out there, and himself from suspicion that he let her go. And to all appearances, he’s still the same cold Savior he had become, watching impassively as Negan hurls the innocent doctor bodily into the furnace.

This is the scene Eugene witnesses that finally completes his transformation. He is stuck in a terrifying world and there’s only one lifeline. When Negan looks at him and says, “You do not need to be scared anymore,” he grabs it. He pledges his life to him. He becomes a Negan.

And there is no hint of irony or subversion there. The combination of the feeling of power and the freedom from fear is intoxicating enough to make the cowardly man commit himself completely.

And so they finally meet, in the episode’s last scene, Dwight and Eugene, both now leaders of the Saviors, two broken men surveying their terrible kingdom. I thought I’d never say this about anything involving goofy ol’ Eugene, but it is a deeply chilling sight. 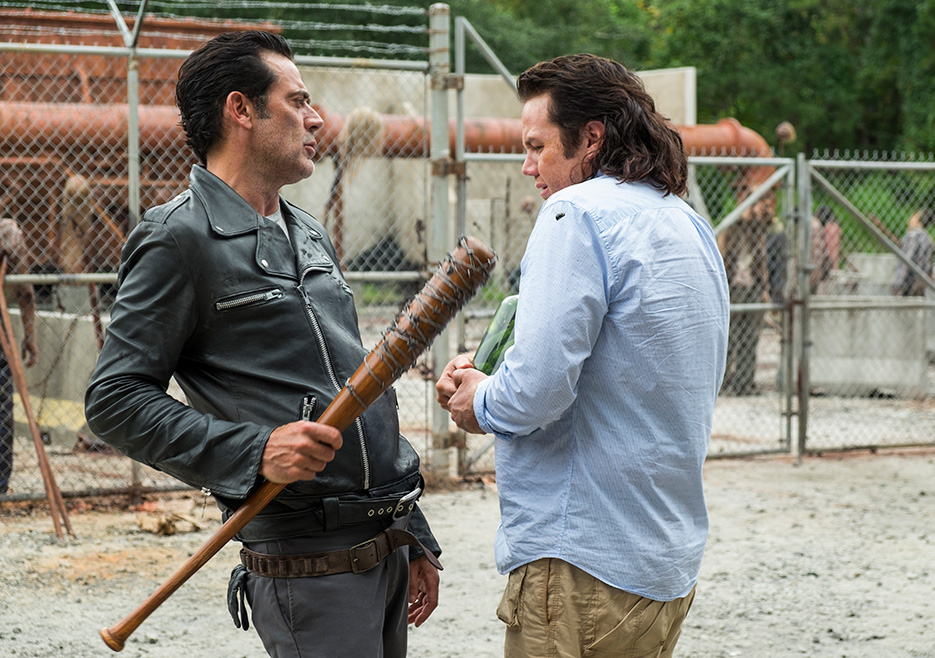