Footsteps echoed through the Park Avenue Armory as the crowd at Marc Jacobs found their seats. These weren’t cushy seats, but exactly 326 metal folding chairs, arranged in two parallel rows that flanked the runway, which was actually just the unfinished wood floor of the ancient building.

“Will the show be starting on time?” Anna Wintour whispered to a publicist donning a headset.

“I have confirmation that it will be,” she responded, as the Vogue editor stepped away to find her seat.

And at exactly 2 p.m., model Slick Woods emerged from a nondescript door in a beige corduroy jacket and gold dress and began her long trek down the runway. Half the room didn’t even realize the show had begun, until the leggy model was directly in front of them, as she wasn’t walking to a soundtrack. There wasn’t even an experimental beat; this runway was entirely silent, save for the clacking of the wooden stacked heels and the clunking of thick-soled waxed leather boots.

The sparsity didn’t stop at the music, as there was no set to speak of for Jacobs’ latest collection. Aside from the metal chairs, the unadorned interior of the Armory was the backdrop of the show.

In the show notes, Jacobs explained that he was inspired by the four-part documentary series titled Hip-Hop Evolution (which you can watch on Netflix, in case you need weekend plans). The docu-series, which covers hip-hop culture from the ’70s to the ’90s highlights the careers of Afrika Bambaataa, Grandmaster Flash, Sugarhill Gang, Run D.M.C., N.W.A., Dr. Dre and more, as it explains the evolution of the music genre.

Jacobs then turned this inspiration in a more personal statement.

“As a born and bred New Yorker, it was during my time at the High School of Art and Design when I began to see and feel the influence of hip-hop on other music as well as art and style,” he wrote in the show notes. “This collection is my representation of the well-studied dressing up of casual sportswear. It is an acknowledgement and gesture of my respect for the polish and consideration applied to fashion from a generation that will forever be the foundation of youth culture street style.”

This resulted in the obvious hip-hop references, including heavy gold chains, though Jacobs’ iteration was designed in collaboration with artist Urs Fischer. There were also backwards baseball caps, bucket hats and knit beanies, except these were exaggerated and pumped up with volume by milliner Stephen Jones.

The clothes, offered in a neutral palette of camel, brown, gold, maroon, ginger and red, were surprisingly wearable. The rave princess from Spring/Summer 2017 was forgotten and in its place were comfy tracksuits, shearling-lined plaid jackets, lurex argyle henleys, zip neck sweater dresses and bootcut corduroy trousers. And there were teeny dresses with keyhole details, sensible sweaters with V-necks, crewnecks, turtleneck and zip-ups. The whole collection felt retro, with plenty of thrift store vibes, but entirely devoid of kitsch.

In a way, this show felt like the most appropriate one of the season, given the current state of affairs in America. It was not a celebration of anything more than the clothes at hand. It was somber, but not depressing. It referenced a culture, but did not misappropriate it, as Jacobs has mistakenly done in the past.

The collection was titled “Respect,” and in that vein, the designer asked the crowd not to post on social media during the show. While we spotted a few phones snapping pics during the runway, the crowd remained mostly respectful and many refrained from sharing their images of models from inside the Armory. In an interview with WWD‘s Bridget Foley, Jacobs explained how he wanted the attendees to really experience the theater of the show and not be staring at their phones the whole time.

And, he did just that. As the guests filed through the row of chairs, out of a door opposite the one they entered from, they were met with a cluster of models, standing and perching on a series of folding chairs in front of a massive wall of speakers. Some of the models were armed with cellphones of their own, letting the crowd know that now was the time to take out your iPhone, snap some pictures, upload a video to Instagram stories and capture the moment. 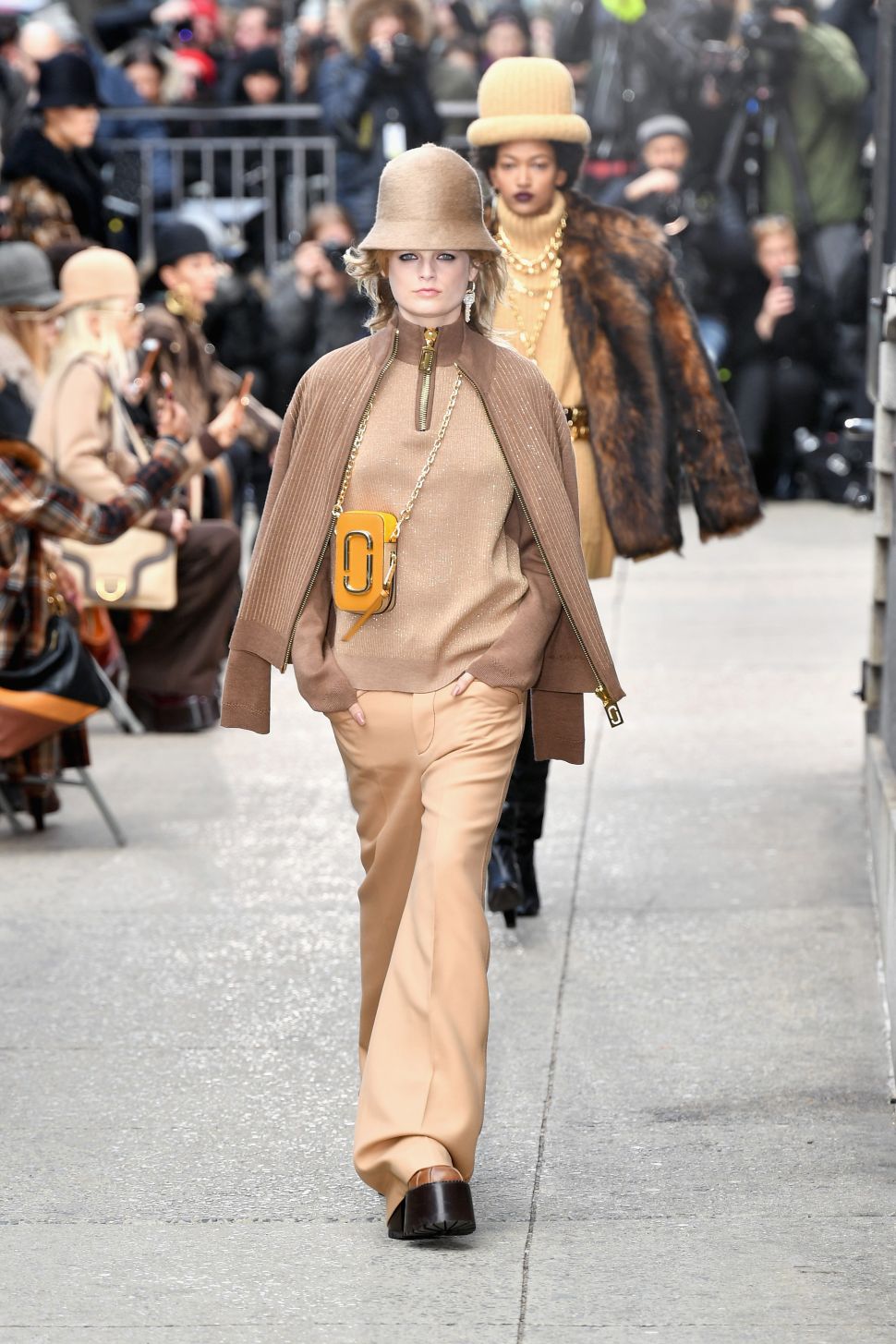