By now, we’ve all seen what a self-driving car can do. Industry leaders like Tesla and GM-owned Cruise have released videos that show their autonomous vehicles navigating through traffic, but another company just released one that’s far more impressive than anything we’ve seen before.

Drive.ai, the Silicon Valley startup founded by former lab mates at Stanford University’s Artificial Intelligence Lab, released today a video of of its autonomous driving software navigating the roads of Mountain View, California. The video, however, is a level up from anything we’ve seen before because of the conditions the car encounters. Not only is the entire video (which consists of just one shot) filmed at night, the car is also driving through the pouring rain.

The drive is fully autonomous as well, meaning there is zero human intervention. Here are some highlights of the video:

• 0:10 Heavy downpour that continues throughout the drive
• 0:30 Narrow street with parked cars and glare from oncoming traffic.
• 1:00 Busy four-way stop sign and a car cutting in front of the Drive.ai car
• 1:50 Broken red light at intersection
• 2:35 Night driving with confusing reflections from the wet ground

In addition to the general problems that come with slippery roads, bad weather and nighttime driving are particularly challenging for self-driving cars because they affect the visibility of the sensors used to navigate.

“These are conditions drivers encounter every single day. Any successful self-driving technology will need to address countless unpredictable situations and a wide range of driving conditions, yet few are able to today,” Drive.ai CEO Sameep Tandon told TechCrunch.

Drive.ai is one of few startups with a permit to test self-driving cars on public roads, so you can expect to see a lot more from the company. 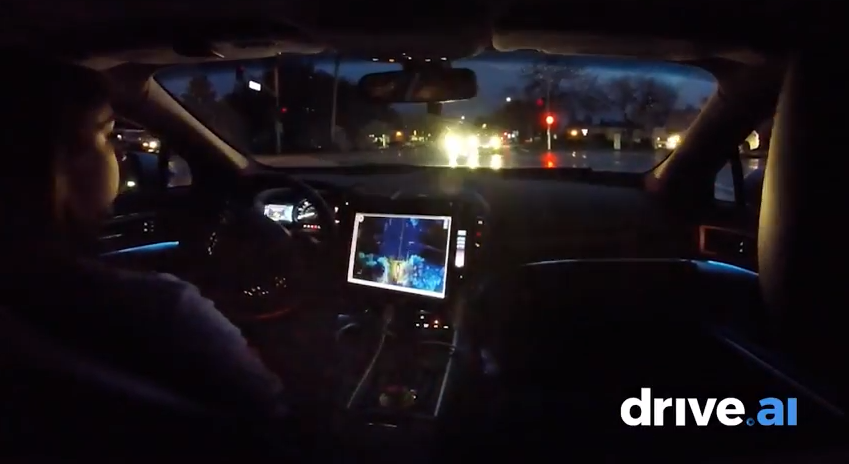