“I could paint a horse’s face and think of my mother and it would begin to feel like her,” says TM Davy, reflecting on his strange and wonderful exhibition “Horses,” on view at 11R in New York through February 19. As its title pretty bluntly suggests, the show is composed solely of paintings featuring four-legged, lushly maned protagonists. Davy is perhaps best known for slyly erotic, chiaroscuro portraits of mostly young men (and the occasional older man, like gay icon and ex-General Idea member A.A. Bronson). In those works, many of them very modest in scale, the artist regularly experiments with the effects of candlelight on skin, cats, guitars, and lace curtains, among other things. “Horses” is different: There’s nary a human in sight, and the light that we find is unnatural, unnerving. While horses themselves may be the go-to subject for daydreaming, doodling teenage girls, Davy’s steeds are less romantic and far harder to fathom. This exhibition gives each of his epic animals room to be admired—low-lying benches dot the gallery, inviting visitors to pause and commune, to ponder an effortless technical mastery married to a subject matter both commonplace and otherworldly.

The gallery’s front room features a pair of canvases in which horses are standing in bare, anonymous rooms. A slim window interrupts one wall; the horses stare yearningly toward or through this aperture, which allows light to enter the room, fractured into prisms. Small details are important: the swell of ribs beneath fur; one horse’s clear, strikingly blue eye. Davy’s painterly chops veer toward nearly photographic realism, which only makes the unreality of the setting depicted that much more jarring. Where are we, in this featureless animal jail? Things don’t get any clearer. The next painting we encounter is of a single young horse, almost entirely obscured by shadow—he’s basically floating in an inky void. I say he comfortably because the horse’s gender is pretty apparent, given his prodigious penis, which is loosing a healthy stream of vaguely Mountain Dew-colored urine onto the floor.

In 11R’s adjacent second space, Davy plays with scale. A pair of small canvases show horses leaning in to graze grass, but even the cropping here is unconventional—the horses cut-off rudely at the neck. The exhibition is rounded out with two final, large-scale canvases. In one, a solitary beast wears blinders. It’s trapped inside a windowless, wooden room, lolling its tongue on a salt lick. The lighting in this painting is subtly bizarre, the horse’s midsection inexplicably aglow; and even if the composition refers to what is or might be real (an animal being transported in a trailer to a county fair, etc.) there’s something about it that reads as distinctly sci-fi. The final painting fulfills the suspicion that all here is definitely not what it seems. We see a pair of horses in the center of a forest, with tree branches and leaves curled around them fantastically, as if to create a stage of foliage for them to pose against. The striking, inorganic sense of symmetry here—the greenery, the weirdly holy animals—recalls nothing so much as the 15th century Adoration of the Mystic Lamb by Jan van Eyck.

Davy’s path to horse painting is varied, leaping across generations. An abbreviated list of his self-stated antecedents includes cave paintings at Lascaux; Jean-Leon Gerome’s 1870 Arabs Crossing the Desert, which he recalls copying as a teenager; Eugene Delacroix and his “empathic, startled beasts”; Peter Hujar’s photographs of West Virginian horses; the early 20th century Der Blaue Reiter movement; and “Amazonian bareback riders, terracotta horses in China, heroic horses and Pegasus in Greece,” among other inspirations. “Outside of the canon, but no less important,” Davy tells me, “I was a kid who guiltily loved playing ‘My Little Pony’ with my younger sister. Rainbow Bright also had a beautiful, rainbow-haired horse. The shift of the horse away from ‘masculine’ violence, or vehicles of war, and back into a ‘feminine’ balance of power is interesting to me still. Nonviolent conflict resolution through symbolic forms and communicative otherness is a wondrous thing worth serious thought.”

In the end, Davy’s horses work as metaphor, a way to harness emotion, experience, or desire. “For months my horses looked ‘real,’ but I let them stay open as devotional containers,” he explains. “They became these beings of thought and meditation for me. I might feel at peace while painting, and the horse would feel more at peace. Another day I might revisit the same horse and think of another friend with some concern or new emotion in my hand, and the horse would hold that too. A student of mine felt a terrible sadness in one horse, and I’m sure they were right in a way. But in that same one, a friend saw Liam—my husband—very clearly, and the brightness he has, and truly he was in there also.” 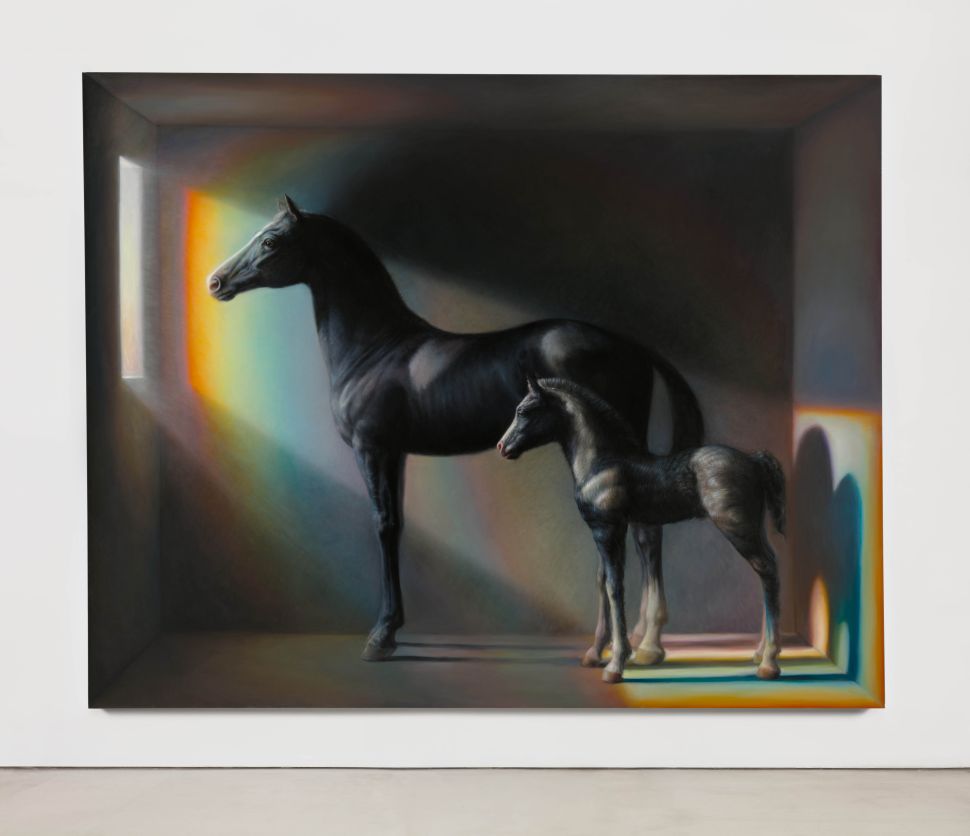