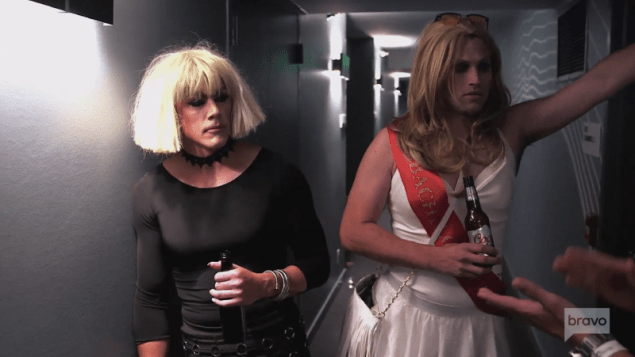 Last week’s chaotic bachelor(ette) party was just the tip of the proverbial iceberg that is Katie and Tom Schwartz. We knew that – it was heavily advertised, after all – but what we didn’t realize was just how formidable and jagged the iceberg really is. This week’s episode, which is potentially part two of a bachelor/bachelorette triad, tried to explore the origin of the caustic couple’s issues. And often happens with Vanderpump Rules, it’s not what you’d think. In fact, it might not be what anyone thinks. What will it take to get more than two cast members on the same page about anything? The Benny Hill music should play in the background during their drunken confrontations. But let’s back up.

It’s morning two in New Orleans, and tensions have not cooled in the sweethearts’ suite. Katie is sprawled across the bed, deeply asleep, and her fiancé Schwartz appears to have slept on the couch. As he crawls into bed with Katie, he uses a baby voice to both a) gently rouse her and b) immediately request an apology for the way she spoke to him the night before. Hot. Could anyone have guessed that this would lead to the pair’s first spat of the day? The problem is, at this point, they don’t need anything to set them off; that is, anything of significance. In alternating talking heads, Katie and Schwartz explain that as their night drew to a close, the subject of calling a car to take them home arose. That’s enough to turn into a fight. They fought about it, off-camera, the night before, and they’re fighting about it this morning. Check out this darling exchange from the lovers:

“I’m not trying to bust your balls, dude,” Schwartz says to his betrothed.

“So what if I am still drunk?” snaps Schwartz. He then leaves the room, wearing exactly what he wore the night before, and then slept in, and apparently plans to wear for the rest of the day. His fiancée is hungover and in bed. What an adorable, mature disagreement from the couple!

On his way to “hunt” gators with his groomsmen (and Ariana), Schwartz, perhaps unwisely, continues to drink. Also, his friends prank him with lizards and snakes. Tom Sandoval, the best man, reveals that he mostly planned this outing for the myriad opportunities it would provide to prank Schwartz. Good one? This contrasts nicely with our glowing bachelorette crew, who have dressed up and decamped to Galatoire’s on Bourbon Street for some French-Creole fabulosity. Ever-selfish Stassi, back on her home turf, has ordered more than enough seafood for the bridal party. She has somehow forgotten that Kristen is a lifelong vegetarian, and that Scheana finds eating seafood equally as appealing as eating a cat. (This is something Scheana actually said once, though not as succinctly.) But that’s just fine – it’s even convenient. Now, Kristen and Scheana can sneak away to gossip about precisely what happened after the cameras stopped rolling the night before.

As it turns out, Kristen – a reformed meddler in her friends’ relationships – recruited boyfriend Carter to have a heart-to-heart with tearful Katie late “last” night. According to Kristen, Katie revealed that the reason she’s so quick to fight with Schwartz goes back to the time he cheated on her on a weekend trip to Las Vegas. Audiences will remember that 2014 fight, which was mostly a dejected Schwartz telling Katie that he made out with a stranger. Why he had to approach her in the middle of a server shift, who knows. But that’s where they left it. At least, on camera. Again, according to Kristen, it was a fundamental crack in their relationship. Katie never believed that Schwartz told the whole truth, and while she never confronted him about it, she also never moved on. (It’s really insane to think that this couple got married last August.)

Over in groomsmen world, the guys (and Ariana) have a lunch that dislodges beer tears from Sandoval and Schwartz. Carter, valiantly, tries to explain to Schwartz that Katie picks fights with him because she’s insecure about Vegas, all these years later. Sandoval shouts that down, claiming it’s “Kristen propaganda!” more than anything else. He dated her for five or six years, so he would know. (Kristen Propaganda is the Vanderpump Rules version of fake news. Which is to say, it’s bananas and very much true.) Schwartz keeps mysteriously referencing the “horrible problems” that he’s had with Katie for years, which causes him to break down at the lunch table. It’s legitimately tough to watch. And when notorious lothario, dislikable human, probable sociopath, and actual jailbird Jax Taylor is telling you that “You don’t want to live like this, man,” at your groomsmen luncheon, it’s probably time to listen.

Back at the hotel, the bridesmaids have hired a female stripper, and they are psyched. Across the hall, the men have recovered from the uncomfortable lunch, which means it’s time for the much-awaited dragfest. Unsurprisingly, Sandoval has gone all in on this; he’s hired local queens Starr, Anastacia, and Aubrey to get the boys ready. Ariana, who has pinged between the bridal and groomsmen parties, excitedly yells “So many gender stereotypes are being broken right now!” She’s actually not wrong.

All dolled up, Visa Manderhump (marry me instead, Schwartz), Tina Lamar (Jax), Jen Rod (Sandoval), Petra Honeysuckle (Peter, the SUR manager who is too grown-up to be on the show) and the rest of the crew hit the town. It’s fun, it’s funny, they get into it, whatever – nothing matters as much as the last few minutes of this episode.

It’s late. Everyone’s tired. They’re drunk. And that’s when it takes off. The guys are talking in the lobby, but Kristen’s inserted herself into the fray, and that’s when they start to fight. A distressed Schwartz is corralled into the elevator, screaming “Bitch whore!” at Kristen while standing next to Carter, her current paramour. And then, not since The Yellow Submarine has there been a hotel scene so iconic. (Yes. I know what I’m saying.) The guys have continued their argument all the way to their room – but they never actually go inside. This is excellent, because Stassi – wearing glasses and an evil Grinch smile – is lurking in the hallway, watching their every move. And they have no idea!

Exhausted, drunk, and sad, Schwartz admits that he can’t really be sure whether he slept with the girl in Vegas all those years ago. Stassi scampers back into Katie’s room, where the bride-to-be sips a Four Loko and quietly confirms that story. Oof. Katie and Schwartz find time to fight once more before bed – “You act like a moron,” Schwartz shouts down the hall, “And you want unconditional love!” – and that’s it for the girls this week.

But we get one more soundbite from Schwartz, our future groom. “I’m done,” he announces, to no one in particular. “I’m done with her. I’m done with Katie,” he keeps walking, and the camera follows. “I can’t marry her. I’m not gonna do it.”

Tom Schwartz and Katie Maloney got married, on camera, in August 2016. Maybe next week’s episode will help illustrate how they get there, but don’t bet your wig on it. 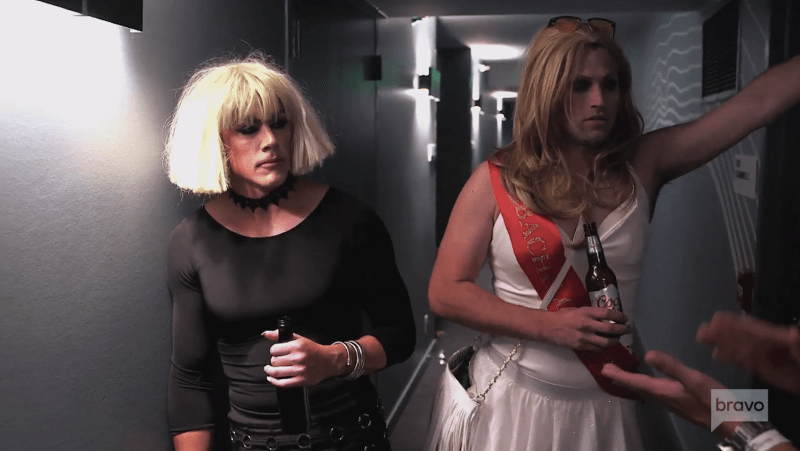