When the aliens come to Earth, please show them this season of Vanderpump Rules. This episode in particular displays the cast in its purest, most distilled form: Drunk, confrontational, and confused. It’s the end of the ill-fated New Orleans trip, and THINGS HAVE NOT CALMED DOWN.

Two weeks before the wedding, and the future Mr. and Mrs. Maloney-Schwartz are having a blackout brawl in a hotel hallway. They’re surrounded by a swarm of their closest friends, all of who try (and fail) to intervene. The gang splits up into two, but not before Tom Sandoval snaps at his best friend’s betrothed that “[She] should have worked all of this out before forcing [Tom Schwartz] to propose!” Ouch. Does he really think this could all rest on Katie’s head? “Nobody wants to believe it,” he continues, “But it’s true.”

At this point, Sandoval returns to his hotel room, screaming and crying over the state of Schwartz’s relationship while still wearing most of his drag. This scene defies description. The camera lingers on a heavily made-up Sandoval, who quickly ramps up into hysterics in front of a dazed Ariana and Scheana. “He’s like a fucking battered wife!” Sandoval shouts, “Look at him!” His next move is to dramatically kick open the door to the bathroom, where Schwartz is happily texting on the toilet. He waves at his pals. These people are so drunk.

Katie and Schwartz find time to fight one more time before bed. Katie flatly accuses Schwartz of sleeping with a girl on his Las Vegas trip a few years ago, and Schwartz, not yet defeated, calls his love a bitch. As he’s dragged out of the room by friends, Schwartz mumbles about wishing Katie had cheated on him, and that infidelity was their only problem. It’s late, so a clear-headed Stassi climbs into bed with Katie, who is obviously drunk and sad.

Schwartz, who has not gotten the hint, materializes next to them. He’s refusing to end the night. “Tell me what I did wrong, and I’ll accept it,” he pleads. While Stassi tries to get the real scoop from Katie – remember, at the time of Schwartz’s Vegas trip, she was out of the picture altogether – Schwartz decides to pick a new target. “Nice dating life,” he cuts in, to the girls’ surprise. “Jax, Frank, Patrick. Good run, Stassi.” Schwartz, still in the drag that makes him look like Stassi Schroeder, makes his way to the door. “Good run! Good run, Stass.”

Why is he attacking her? Why is he insulting a bridesmaid, and throwing failed relationships in her face? Is it because she’s between him and Katie, literally, physically in this scene, and he’s impatient? Maybe. Is it because he’s tired of fighting Katie, and only has the drive to battle someone new? Is it because Schwartz and Stassi secretly belong together? (Yes. I sincerely hope so.) In the end, Schwartz stumbles away, Stassi shakes it off, and Katie murmurs that “Tom cheated on me, hardcore, lied, then he admitted it. But only, like, 20% of it.” We’ll probably never know the full story.

The next morning, Schwartz wakes up laughing, with an erection, still in his dress and sash. The camera jumps around, zooming in on Scheana and Shay uncomfortably discussing their “great” marriage (the couple announced their divorce before this season premiered) and Sandoval and Ariana’s morning after. Sandoval remarks that Katie and Schwartz have had the same problems throughout the tenure of their relationship, and there’s a flashback to years ago. Surprisingly, or maybe not surprisingly, Katie is drunk and screaming at Schwartz in front of their friends. Schwartz handles it by making fun of her to everyone there. Yikes. “I don’t want everything to be Band-aid better,” Ariana says, tired, “But I want things to be better.” Fortunately, she’s on Vanderpump Rules, where you’re always going to get a little bit of both. And like nine other things, too.

Across town, Stassi, Kristen, and Katie visit Stassi’s childhood home. Stassi mentions that in high school, when she was home alone, she’d sing show tunes to a fake audience she’d imagine was in her living room. When asked to reenact this by her friends and father, she giggles, embarrassed. Where is the Stassi we grew to love and fear? Did heartbreak, serious heartbreak, neuter her? Seeing her this relatable is a little spooky, to be quite honest.

Back at the pool, Jax comments to Schwartz that he thinks another blowup will break up the couple. He doesn’t think Schwartz has it in him to fight and make up again. One more time, for the cheap seats in the back: When Jason “Jax Taylor” Couchi is giving you good, sane relationship advice — your shit is messed up. So together, Schwartz and Katie decide to hash it out in their hotel room.

Katie mentions in a talking head that she felt vindicated by the previous night’s events. Feeling pleased that her friends saw her fiancé have a meltdown is…troubling. But finally, finally, in this scene, she’s no longer framed as the sole villain. After some passive-aggressive back and forth — during which Schwartz feels the need to both drink vodka from the bottle and foam whipped cream into his mouth – charming Schwartzy lets it rip. “You were a nightmare of a human being the first 2-3 years that I dated you,” he says, matter-of-factly. Katie points out that maybe, maybe, if he wants her to forget the Las Vegas transgression, Schwartz should stop bringing up her past mistakes. After all, he put a ring on her finger and agreed to marry her. Two weeks until the wedding, y’all!!!!

“We’re never going to get anywhere,” says Katie, “We’re never going to agree. Stop criticizing everything I do, so I don’t have to keep being defensive.” Miraculously, she sounds like an adult, while Schwartz comes off as evasive and childish. She jokes that he’s a bridezilla. The two make peace. Good lord.

It’s the last night of their trip. Sandoval keeps his drag nails and wears a plaid suit, because he needs attention that badly, even at his best friend’s bachelor party. Schwartz initiates a game of spin-the-bottle and physically picks Stassi up to make her kiss someone next. Still sure you want to marry Katie, Schwartz? As this happens, Kristen dips outside for a smoke, and Sandoval comes outside too – as if that’s not going to be trouble. In another unusual role reversal, Kristen comes off as wounded and reasonable, and Sandoval seems like he’s stirring up drama. As a bonus, this conversation reveals that Sandoval’s garbage hairstyle this season is due to his extensions. Extensions. EXTENSIONS. TOM SANDOVAL HAS HAIR EXTENSIONS. Hairstylists of LA, ‘fess up: Was this you? I hate it so much. I’m suing for emotional damages.

Anyway. Kristen confronts Sandoval about how he talked shit on her to her boyfriend, and seems sincere and offended and for once, she’s correct. Were this conversation an Onion headline, it would read something like “It’s all in the past for me,” saysa man in the same conversation that accuses ex-girlfriend of several years of cheating on him with multiple partners in one weekend. Back inside, Schwartz and Katie are giggling and cuddly and he gives her a lapdance. Later that night, she’ll describe painting his sleeping face with glitter dicks as “revenge on his face for being such an asshole.” This will be in the same loving breath she uses to describe their ups and downs. I’m afraid of these people.

Oh, and in LA, Lisa Vanderpump and Ken Todd have like a thousand cute dogs and poofy white pillows. While getting ready for bed, the two ominously discuss opening a new restaurant, and the prospect of pulling in Sandoval as a partner.

In next week’s episode, our bride- and groom-to-be ask Lisa to officiate their wedding. That should go well. 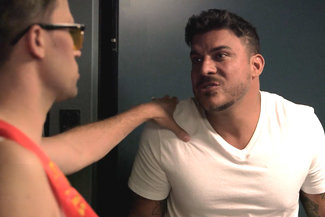