Since she spoke out against the limited debate schedule set up by former DNC Chair Debbie Wasserman Schultz during the 2016 Democratic primaries, Rep. Tulsi Gabbard has been a thorn in the side of the Democratic establishment. After resigning from her position as DNC vice chair to campaign on behalf of Sen. Bernie Sanders, she became a prominent Sanders surrogate. During the beginning of the Standing Rock protests against the Dakota Access Pipeline, Gabbard was one of very few politicians to speak up on behalf of the Standing Rock Sioux and protectors, even making a trip out to Standing Rock with thousands of veterans. That support from veterans helped push the Army Corps of Engineers to delay the pipeline’s construction until an Environmental Impact Assessment was conducted to explore different routes.

Transcending the partisan fray in favor of following her own principles yet again, Gabbard took an unannounced trip to Syria with former Congressman Dennis Kucinich, who lead opposition against the Iraq War at its offset and organized a congressional coalition to stop it. Kucinich has made several trips to Syria to promote a peaceful resolution to the war there.

Gabbard’s trip to Syria isn’t the isolated event her critics make it out to be. In 2015, PBS Frontline’s Martin Smith went on a similar trip to Syria, filming a documentary about how Syrian President Assad and the Syrians living under the control of the government viewed the Syrian War. “For the most part, people were open about their hopes and fears,” Smith wrote in 2015. “As to how the war began, they had a consistent narrative: That the protesters that took to the streets in 2011 had legitimate demands, but that the demonstrations were quickly hijacked by foreign backed jihadists. They reject the idea that Western-backed rebels are “moderates” as they are often termed in the US.” Smith noted that, although Assad had his critics, the people of Syria don’t want their central government—like those of Iraq and Libya—to collapse, virtually destroying the countries’ infrastructures. Smith predicted that the only way peace in Syria would be established is if an agreement between Assad’s government and rebel forces was reached, even if it redrew the border lines of Syria.

After her trip to Syria, Gabbard expressed similar sentiments about the need to establish peace. “I return to Washington, DC with even greater resolve to end our illegal war to overthrow the Syrian government,” she wrote. “From Iraq to Libya and now in Syria, the U.S. has waged wars of regime change, each resulting in unimaginable suffering, devastating loss of life, and the strengthening of groups like al-Qaeda and ISIS.”

The response to Gabbard’s trip to Lebanon and Syria, during which she met with the Syrian President Bashar al-Assad, incited attacks from the establishment and mainstream media for deviating from the political status quo. These attacks, which conflate Gabbard’s diplomacy with endorsed support for Assad, continue to distort the United States’ involvement in Syria. A Washington Post op-ed and a Daily Beast editorial claimed Gabbard’s insistence that the United States is funding Syrian rebel groups, many of which turned out to be terrorists, is false.

However, there is plenty of evidence to the contrary. In June 2016, the New York Times reported that CIA weapons supplied to Syrian rebels were making their way into the black market, due to the fact that the CIA has little control over the rebel groups that they arm, fund and train. In March 2016, the Los Angeles Times reported that Syrian militias funded by the Pentagon and the CIA were fighting one another, another example of how little control U.S. Intelligence agencies have over the groups they have finance. The Los Angeles Times cites Fursan al Haqq as a rebel group being funded by the CIA—which Gabbard has noted, and Reuters corroborated—that has fought side-by-side with Al-Qaeda. Gabbard explained in her proposal of the Stop Arming Terrorists Act that the United States has been inadvertently funding terrorists by funding these disorganized rebel groups. Her critics distort her statements to make it seem as though Gabbard is claiming the United States is directly providing ISIS and Al-Qaeda with funding and weapons.

Bassam and Ellie Khawam, the two men who funded Gabbard’s trip and have been actively pushing for peace in Syria for years, are from Cleveland, Ohio—where Dennis Kucinich’s former congressional district is located. In 2011, The Plain Dealer interviewed Bassam Khawam, a Christian from Lebanon, about the Syrian War, and in 2013 a Cleveland-based ABC News affiliate quoted him protesting the war in Syria. Gabbard, in defense to her critics about the funding of the trip, announced that she would reimburse the costs and pay for it out of her own pocket. The show of good faith from Gabbard inflamed criticisms from establishment war hawks, who have been exploiting a neo-McCarthyism narrative surrounding allegations of Russian election interference to push their pro-war agenda in Syria.

“What do these outraged observers want ‘us’ to do to ameliorate Syrian suffering? For prominent pundits and leading editorial boards, the answer is usually bombing the Syrian government,” wrote Adam Johnson in an article for The Nation, criticizing political pundits who feign outrage over the war in Syria to manufacture consent to overthrow the Syrian Government. “One Washington Post report puts the total CIA spending on anti-Assad forces at $1 billion a year—or one in every 15 dollars of the CIA’s official budget. This inconvenient fact is tossed into the memory hole in favor of a simplistic fable of Rwanda-like indifference.”

Johnson added that pundits will admit that there was no exit strategy in the interventionist disasters of Libya and Iraq, but they offer no plan to prevent a similar political vacuum from happening in Syria.

These same pro-war pundits that push for further intervention in Syria did the same thing when they manufactured consent for regime change in Iraq and Libya. By citing the corruption and humans rights abuses of those countries’ dictators, they helped manipulate popular consensus into supporting the toppling of those governments, which has in turn created more chaos in the Middle East and provided a haven for terrorist groups to thrive. Gabbard has reiterated throughout the Syrian conflict her pro-peace stance, and she has never claimed support for Assad. Rather, she acknowledges there will no peace in Syria if the war hawk agenda to overthrow the Syrian government is implemented. 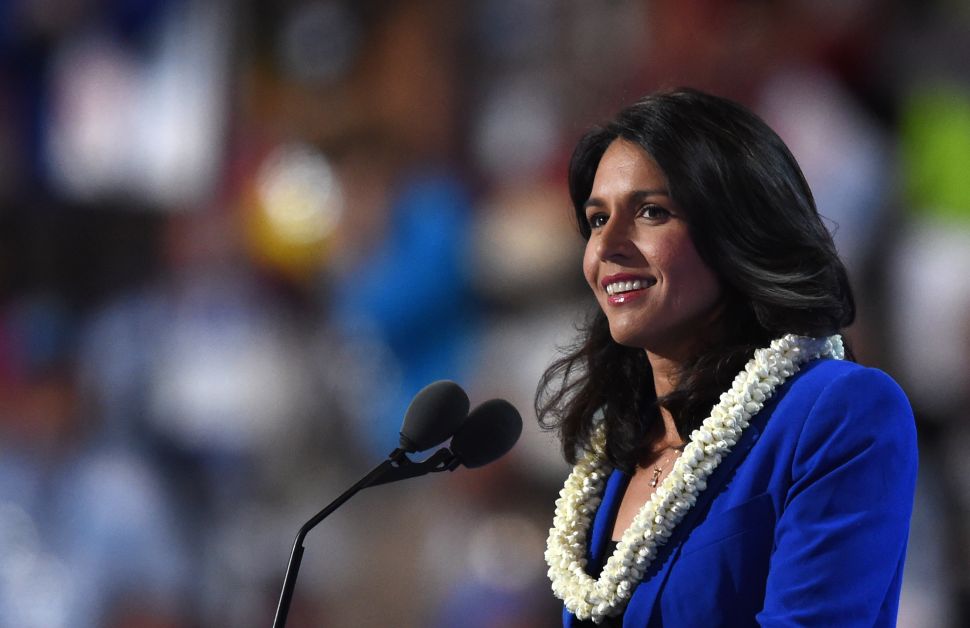