If the television-obsessed President Donald Trump watched Real Time with Bill Maher on Friday night on HBO, he got a jolt of reality from Congressman Darrell Issa, the slippery Republican conservative from California.

Issa was asked by the host whether Attorney General Jefferson Beauregard Sessions III should recuse himself from the FBI investigation of Trump’s campaign and its contacts with Russian operatives.

In that Sessions worked on the Trump campaign before Trump appointed him to lead the Justice Department, his underlings could be investigating his political allies, if not Sessions himself.

In case Trump didn’t see it live, Issa’s answer was replayed Sunday on a few shows, including This Week with George Stephanopoulos on ABC.

“You cannot have somebody, a friend of mine, Jeff Sessions, who was on the campaign and who is an appointee,” Issa told Maher. “You’re going to need to use the special prosecutor’s statute and office.”

Issa may be the canary in the Republican coal mine in the way a dead bird warns miners that the air has turned poisonous. This was pointed out by another ABC guest, Robert Reich, a former Secretary of Labor under President Bill Clinton.

“You’re seeing cracks in the Republican Party when Darrell Issa says ‘Yes, we do need a special prosecutor,’” Reich said.

Issa’s district, near San Diego, voted against Trump in November and Issa is considered vulnerable in 2018 as the progressive resistance builds. During last week’s Congressional recess, Republicans heard anger from their voters about Trump and Congress.

Gerald Seib of the conservative Wall Street Journal told Chuck Todd on NBC’s Meet the Press “The Republicans have resisted, but I think they are sending the signals . . . that they realize optics at least are going to require what looks like an independent investigation.”

Except for Fox, most networks played up the investigation—and not just the FBI probe.

“I don’t think that Priebus thought he was doing anything wrong,” Christie told Jake Tapper on State of the Union on CNN. “I really don’t—and I have absolute confidence in his integrity. But perception matters.”

Speaking of Trump’s inner circle, Christie said “Remember, these are all people that have never been in government before and so they’re going to need to learn . . . I don’t think the chief of staff will ever have that kind of conversation with the FBI . . . again. Nor should he.”

‘Sooner or later, the Donald Trump Show will have to deliver to his voters.’

“It was on the Bill Maher show,” Santorum said, “so let’s put it in context. The rush to a special prosecutor is always a dangerous thing.”

Another right-winger—Ben Domenech of the Federalist—voiced his reservations on Face the Nation on CBS when host John Dickerson asked him about White House pressure on the intelligence committee chairs.

“I do think that they overstepped the bounds of normalcy,” Domenech said.

Todd on NBC mentioned that Trump’s most vicious attacks against the media come right after new disclosures in the Russian espionage scandal.

The Kremlin tried to influence the American election in favor of Trump. The involvement of the Trump campaign is being investigated.

“Could his media attacks be designed to distract attention from these disturbing Russia stories that just won’t go away?” Todd asked.

One of Todd’s guests was Sen. Tom Cotton, Republican of Arkansas, who said calls for a special prosecutor were “way, way getting ahead of ourselves.

“There’s no allegations of any crime occurring,” Cotton said. “If we get down that road, that’s a decision Attorney General Sessions can make at the time.”

The only reference to Issa’s idea lasted about one minute, when Wallace asked Corey Lewandowski—a former Trump campaign manager—whether a special prosecutor should replace Sessions.

“I would leave it in his capable hands,” Lewandowski said.

Sarah Huckabee Sanders was the only White House spokesperson on the big shows Sunday.

She spoke on a remote camera from outside the White House to Stephanopoulos, who asked her about the investigation of the Russian connection to the Trump campaign.

“The story is B.S.,” she said, citing her unnamed sources in the FBI.

Stephanopoulos replied “The FBI hasn’t said that at all. But I was asking a different question: Is it appropriate for the attorney general to oversee that investigation?”

She ducked that question, too, and another one that Stephanopoulos asked three times—the third time with irritation—about the Republican attack on health insurance.

“Will the president guarantee that he will not sign a plan that will cause people who have coverage now to lose it?”

“Look,” she said. “I’m not going to s-s-speak specifically for the president on that topic. But what I can say is he’s made it a high priority and a number one focus that we make sure that people who have insurance continue their insurance, particularly those in the highest need.”

As to Trump’s announced boycott of the White House correspondents’ dinner in April, Huckabee Sanders said there is no reason to pretend for two hours that the President is friendly with the media.

Then she went full Dan Rather with what she called a Southern saying.

“If a Girl Scout eggs your house,” she asked, “would you buy cookies from her?”

During the pundit panel, New Yorker editor David Remnick was trying to make a point when several voices interrupted him.

“Excuse me, let me finish,” he said. “Sooner or later, the Donald Trump Show, which is a projection of strength and authority, will have to deliver to his voters. And if he doesn’t, in very real terms, if he can’t supersede a situation where a president cut the unemployment rate in half, if he can’t do better, if he can’t open factories and all the rest he’s promised, then I think he’s in trouble.”

That was strange in that Trump recently said “If you don’t use that term, you don’t understand the nature of the threat out there.”

Brennan said “these bumper-sticker terms” do “more harm than good” and that “you need to be precise. That’s one of the things the president needs to realize.”

John Kasich, Republican governor of Ohio, told Dickerson that repeal of the ACA would hurt 700,000 people in his state on Medicaid.

People don’t mind reform, he said, “but don’t take everything away.”

“Nobody knows where the President of the United States comes down on this issue because he has said multiple conflicting things. He’s been all over the map. Different representatives of the White House are saying mutually exclusive things . . . Congress wants direction . . . They want him to tell them what to do. And he hasn’t.”

Christie discussed the alertness and rest habits of Trump, who controls nuclear weapons and belches out bilious Twitter tweets at all hours of the day and night.

Representative Ruben Gallego, an Arizona Democrat, discussed how the attack by Trump and Congressional Republicans against the Affordable Care Act could backfire on the GOP.

“If you start unraveling portions of the ACA, you could pretty much create a shock to the insurance market which would have horrible repercussions for them electorally,” he said. “And they just don’t know how to do it right now.”

Regarding White House attacks on the media, Gallego said: “The White House is trying to discredit the press because they know there is more coming” on the Russia story that Trump calls “fake news.”

Near the end of his show, Todd mentioned that Muhammad Ali, Jr., was questioned for two hours at an airport when trying to re-enter the United States.

Democratic Gov. Terry McAuliffe of Virginia was asked by Wallace about Trump’s crackdown on undocumented immigrants.

“This is an attempt to bully the press by using access as a weapon to manipulate coverage,” he said.

On the same subject, Will Bunch of the Philadelphia Daily News said “Drip by drip, this campaign against the media is a real threat to American democracy.”

In that Trump frequently Twitter-rages against what he calls “the failing New York Times,” the executive editor of that paper, Dean Baquet, told Stelter: “We’re not failing at all. In fact, our digital subscriptions are going through the roof. Even print subscriptions are up.”

Stephens of the Journal, on a more general subject, said “What I fear, I hear from a lot of people on the right, is that they’re giving Trump a pass for his fake news, for his constant perpetuation of lies, while being savage about mistakes made by the press.” 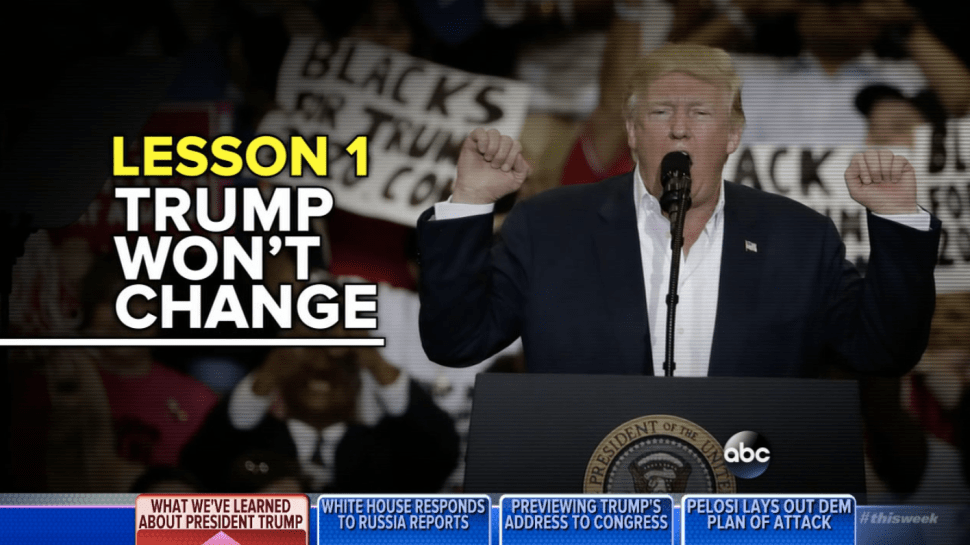