“The idea that creativity is related somehow to bipolar disorder has been pretty well debunked,” said New York psychologist Eric Dammann, who specializes in the treatment of fine, literary and performing artists. This may be great news to artists who don’t want to believe that what is unique about them also is what’s wrong with them. That’s one myth down, but then there is always another. “Many artists are fearful of therapy, oftentimes because they believe that it will make them normal and they won’t be creative anymore.”

It is certainly true that some psychotropic medications at higher dosing levels may make patients, including artists, feel “flat.” However, the purpose of therapy “is just the opposite, which is to get obstacles—like stage fright, like creative blocks, like issues of self-esteem—out of the way so you can do what you want to do,” he said.

At the Psychoanalytic Psychotherapy For Artists program of New York’s William Alanson White Institute of Psychiatry, Psychoanalysis & Psychology, where he is co-director, Dammann deals with both beliefs about therapy that artists may have, as well as the underlying emotional and psychological problems that brought artists there in the first place. Another one of those beliefs is that artists’ psychological problems are specific to being artists, but that is a grayer area, he claimed.

“On one level, artists are dealing with the same problems as everyone else, such as mood disorders, insecurities, trauma,” he said. “Some of those problems may become magnified by the work artists do, however.” Trauma, for instance, is not unique to artists, but while someone in another, non-art field of work might be able to fumble through, an artist may be “butting up against the trauma again and again through his or her work that deals with trauma.” Economic insecurity is another area that is not peculiar to artists, but the lack of congruence between the skills that an artist may have and that person’s level of achievement often seems greater than for those who aren’t artists. “Someone who studied accounting and is good at accounting is likely to get a well-paying job in an accounting firm, while a highly skilled artist can end up with nothing to show for all his hard work.”

Creative blocks usually are associated with fine artists and writers, yet many other people periodically or regularly find themselves stuck in a rut, doing (or not doing) the same thing and not knowing how to envision something different. “Outside of the arts, we call that ‘stagnation’ or ‘procrastination,’” Dammann said, “and it is a very troubling feeling. In another field, you might find yourself doing the same thing over and over again, but at least you are doing something, while in the arts by definition you aren’t doing anything, and that can be very traumatic.”

Getting artists to come in, overcoming that fear that therapy robs them of creativity, is a challenge, he said, but some do, “because whatever has gone wrong in their lives and work has become so great that they know they have to deal with it.”

The White Institute’s artists program began in 1996, placing artists in various fields with area psychologists (the current roster has between 25 and 30) who have experience working with this population. They may charge as little as $40 for a 45-minute appointment, with no set number of sessions, and roughly half of the clinicians accept insurance. “We try to match psychologists with artists in terms of specialties and payment methods.”

The White Institute is not the only place where artists seeking counseling may turn. The Actors Fund, the International Association for Dance Medicine & Science and the Performing Arts Medicine Association also offer services for artists, specifically those in the performing arts. Division 10 of the American Psychological Association focuses on the psychology of aesthetics, creativity and the arts, but it has little to do with actual therapy with artists and more with the publication of a journal articles on the subject.

Frequently, artists bring in their writings, their paintings and sculpture, their videos of their performances to counseling sessions, which creates some anxiety for their therapists.

Otherwise, there is no lack of psychologists and therapists from whom artists may seek help, although the number of clinicians whose practice specializes in those working in the creative sphere is more limited, and most of them are not part of an association. Some advertise or can be found through online searches. Manhattan-based Linda Hamilton, whose private practice is 80 percent performing artists, is a wellness consultant to the New York City Ballet, which refers dancers in need of counseling to her, and she charges $250 per hour.

Nancy Hillis, a psychiatrist and abstract painter in Santa Cruz, California, started out with a more general practice but then saw a few artist patients and, “through word of mouth, began to get others, and now that’s my principal clientele.” She charges $250 per hour and does not accept insurance. Another Californian, Eric Maisel, who describes his work as “creativity coaching,” is not only found online by his patients but also conducts sessions with them online through Skype, charging $175 per hour or $100 per half-hour. “I no longer do in-person coaching,” he said, adding that he also conducts group training.

He noted a large “gender division” among artists who seek his help. “My workshops are 90 percent women, because women are more willing to reach out when they are experiencing obstacles to their creativity than men.” Many male artists, on the other hand, “just keep doing what hasn’t been effective for them rather than look for help.”

While the underlying emotional problems artists face are no different than those faced by the general population— such as mood disorders, loss and emotional trauma, anxiety, relationship issues, alcohol and drug dependency, depression and blocks—clinicians claim that these may be heightened by the nature of their creative work. Eating disorders often are found with performers, while mood disorders and alcoholism are not uncommon with poets and writers, according to Manhattan psychotherapist Olga Gonithellis, reflecting their fears that they aren’t good enough. Hamilton claimed that rock musicians are regularly linked to hard drugs, while “classical musicians take beta blockers, because that helps them control their nerves.” Problems in artists’ relationships frequently stem from the fact that a non-artist partner may not seem supportive of the artists’ travails or shows little sympathy for an artist who isn’t earning much money.

Hillis said that “one of my patients was a public school teacher, struggling to be a children’s book writer, who suffered from migraines. Migraines have a physiological basis, but the psychological issues of doubting whether she should write full-time, and doubting her abilities as a writer, certainly exacerbated the pain.” In time, this patient was about to overcome her self-doubt to leave behind her job to devote herself to being a children’s book author. “She has published several books and gives talks at conferences. It worked out well for her.” (The migraines haven’t disappeared, but they seem to be less of a problem.)

Another one of her self-doubting clients actually had a serious medical problem, a temporal lobe seizure disorder, “and through my medical training I was able to recognize that and get this person the help she needed.” (It has been speculated that temporal lobe epileptic seizures were behind Vincent van Gogh’s action to cut off one of his ears and eventually take his own life.)

At times, psychologists go beyond attending to strictly the emotional issues that brought in their clients to more general lifestyle and career concerns. “A performing artist who is always auditioning and always being turned down can certainly get very depressed,” Hamilton said. “I have to determine whether this person is doing something self-sabotaging during these auditions or if the person just isn’t good enough to get the parts.” She offers these clients ideas on how to take down their level of stress a notch or two. “They might need some other interests that help prevent burn-out, or they might need a Plan B, a survival job. A lot of talented people won’t make it, and I try to identify where someone needs work or something else to do. I direct them where I can.”

Frequently, artists bring in their writings, their paintings and sculpture, their videos of their performances to counseling sessions, which creates some anxiety for their therapists. “I don’t want to be put in the role of judge,” Hamilton said. “If the problem is that people don’t like their work and then I don’t like it, I’m not being helpful.” Maisel stated that “officially, I don’t look at someone’s work, but unofficially I sometimes do, going to the client’s Web site. It’s just for my own personal interest, but I would never tell someone that their work is bad and they should stop being an artist. That would be cruel. And, people can improve.” His larger reason for not wanting to “officially” view a client’s work is that “someone’s artwork isn’t a straight-forward path to understanding their psychological state, and I don’t want to look at the art in a Rorschach way.”

A therapy client’s artwork is yet one more step removed from the emotional issue that brought them in, although it is difficult for the psychologists to say no. The art is part of how the clients see themselves, so it is something that needs to be put up with or put to use. “I’m not in the business of analyzing an artist’s work, but we can talk about how the artist sees the work, and that might lead somewhere,” Dammann said. One of Jackson Pollock’s psychiatrists, Joseph L. Henderson, made artwork a substantial element of his sessions with the artist, writing later that “Since he was extremely unverbal, we had great trouble in finding a common language and I doubted I could do much to help him. Communication was, however, made possible by his bringing in a series of drawings illustrating the experiences he had been through. They seemed to demonstrate phases of his sickness.” Didn’t help, apparently. 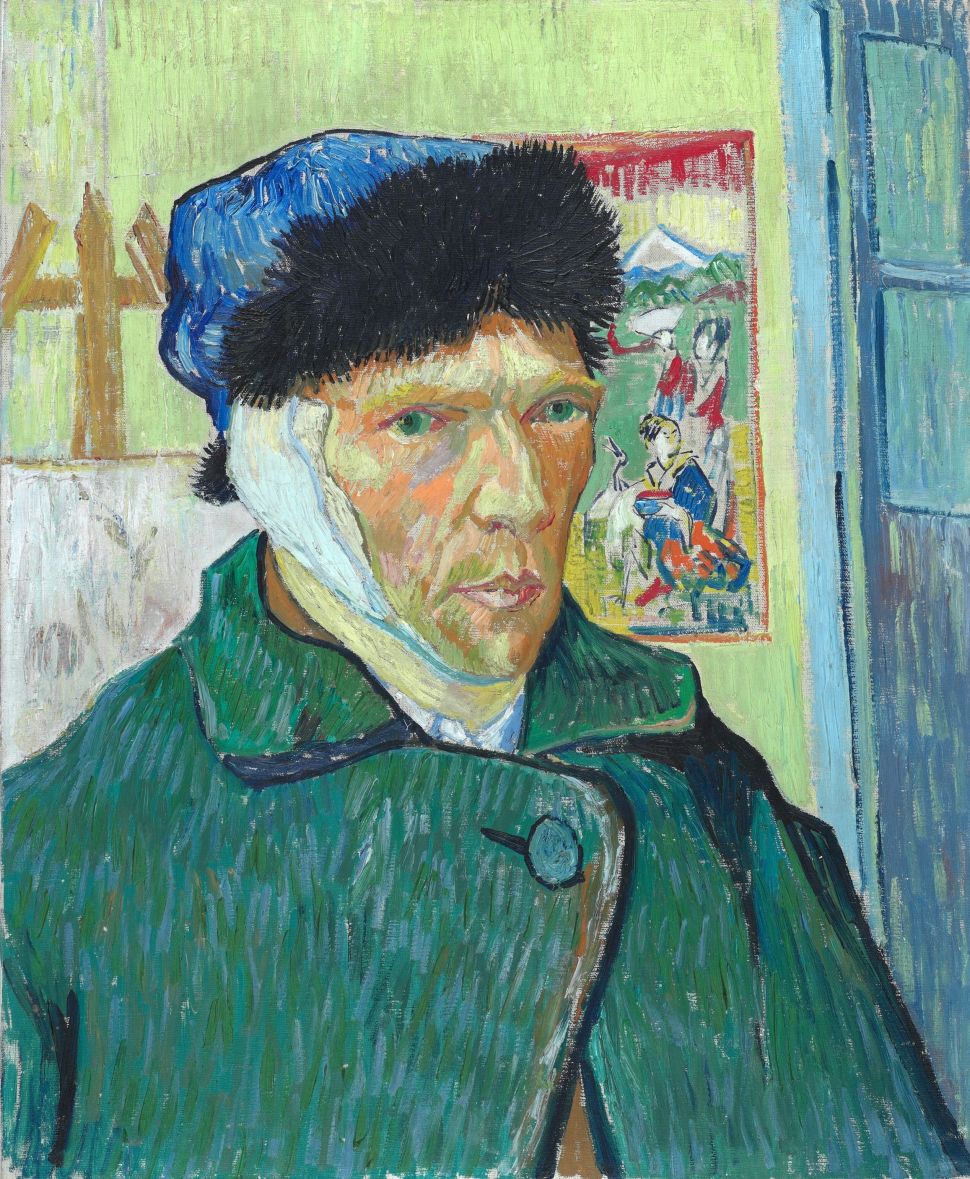