When Riccardo Tisci announced that he would be leaving Givenchy, the prevailing assumption was that he would return to Italy to design for Versace. It seemed pretty amicable (although Givenchy announcing that they would sit the next round of runway shows out seemed to insinuate they weren’t prepared for the exit) and everyone seemed quite sure of the next steps. But what if, quite like Claire Underwood on the Democratic National Convention floor of House of Cards Season 4, another brand could muscle their way in at the last moment with a credible claim? And what if that brand was Nike?

Tisci’s first campaign since leaving Givenchy is simple: the designer himself with model friend Bella Hadid is perched on his lap (sans pants) in front of an elevator. Done in black and white, it’s a nice image, both of them wearing all black. “New RT X Nike” Hadid wrote on the caption referring to Tisci’s ongoing collaboration with the sportswear brand. “So proud!” The campaign shows off the latest partnership between the two, which sees Tisci revamping the classic Dunk style, in a more minimalist style. Titled the Dunk Lux Chukka, this isn’t the first time that Tisci has reworked the shoe; a year ago, he made the Dunk Lux High. However, the relationship between Tisci and Nike predates that design.

Having worked together since 2014, the brands actually have quite a history. Starting with an Air Force 1, the link ups of the pair have frequently been focused on popular styles. The first project involved a very tall hightop and was revealed in Vogue, as modeled by Joan Smalls. All told, first capsule collection, which offered a typical hightop and a low sneaker ended up being offered in three various colorways, released over the years. Add to that his take on the Zoom Legend Chukka, as well as his entire Olympic themed tie in with NikeLab that encompassed apparel, and the designer certainly knows his way around the company’s offices.

Tisci has repeatedly discussed how important Nike is to him and how it weaves into his inspirations, trickling all the way through to his collections for Givenchy. The collaborations have seen good success as well, routinely selling out and causing Nike to re-release them in a variety of color ways. But it takes more than just the ability to sell a few limited release sneaker styles and a brand infatuation to bestow a designer with a creative director title in this day and age. Nike needs to look at what’s happening in the greater market.

In 2014, Puma tapped Rihanna as their creative director for women’s. Since then, the multi-hyphenate singer, designer and burgeoning actor has not only bought a bit of coolness to the brand, but with her Fenty line, inserted the label into the fashion conversation. After a debut show in New York, the brand decamped for Paris, which is where they will return next month for Rih’s third collection. And they aren’t alone: Adidas put Kanye West in a high profile role with Yeezy and that affiliation sees them as part of the NYFW conversation (though they are not officially on the NYFW calendar). Even Under Armor has reaped the high fashion benefit, by hiring Tim Coppens to design for them.

What Tisci would bring to Nike could be a combination of what all three of these individuals bring. He has true design experience that far surpasses that of Tim Coppens, as well as the connections and star power, that while not equal to Rihanna and Kanye West, certainly approaches it. Tisci also has the ability to pull in a rotation of celebrity friends, to punch up the social media conversation at any given time. Plus, if Nike so desired, it wouldn’t be foreign for him to stage a runway show in Paris.

What Tisci represents for Nike is an opportunity. Sure, the brand can continue to be a mover and shaker in the sneaker market and a fringe member of the fashion community, but its competitors have already already embarked on this path. It’s time for Nike to do something a little more directional than capsule collections with various designers, just as a part of Nike Lab. Now is the time to do something bigger. 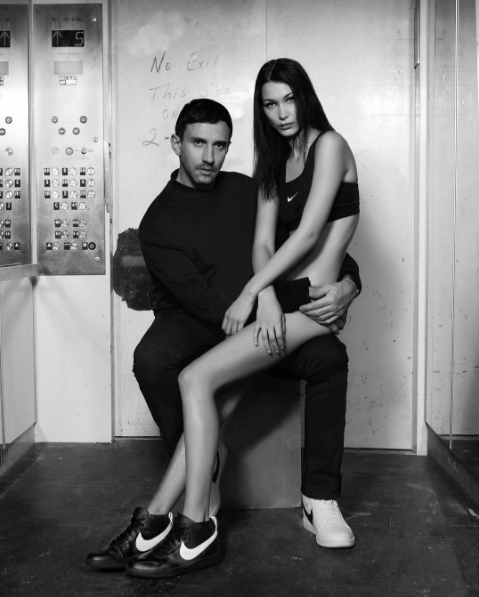