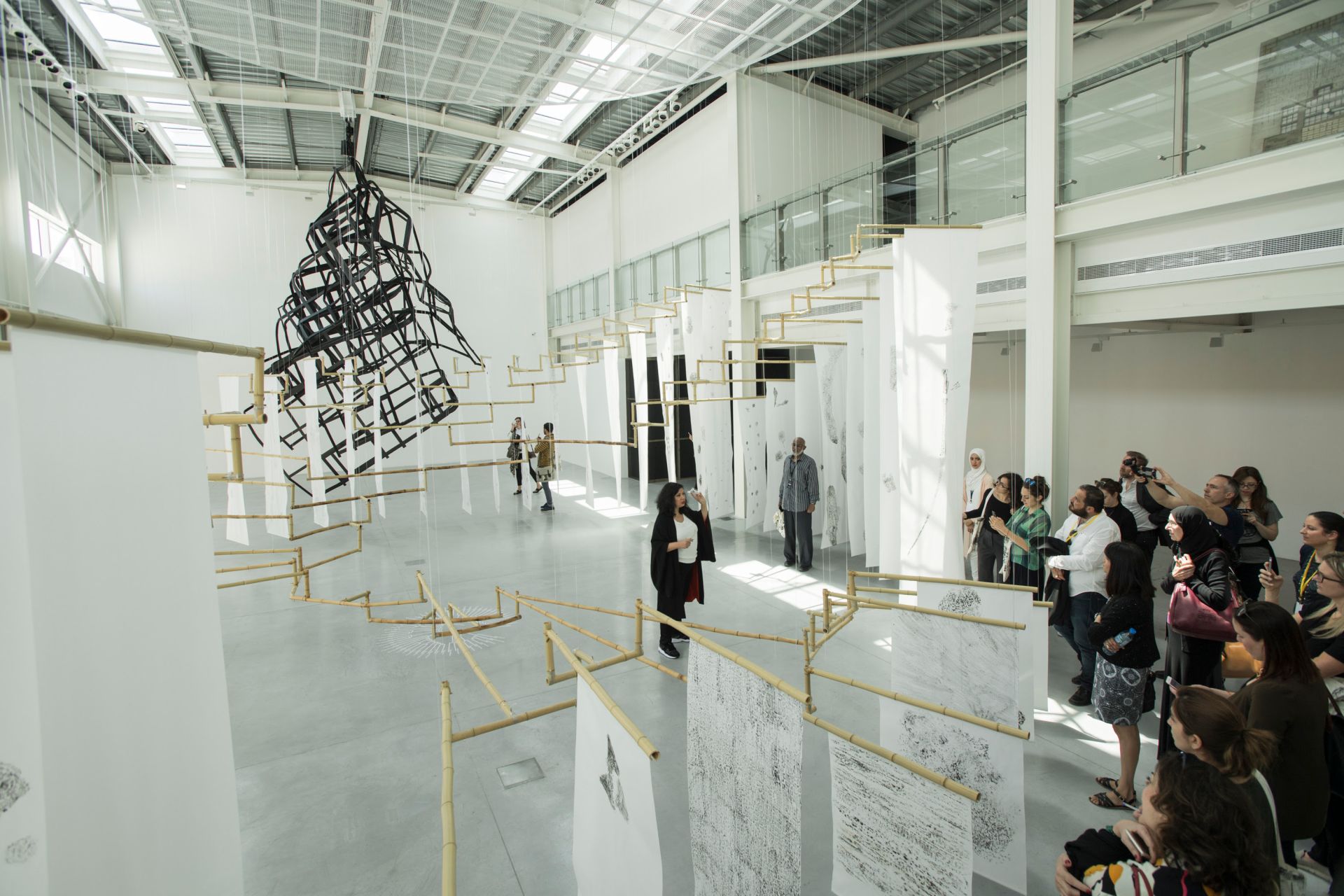 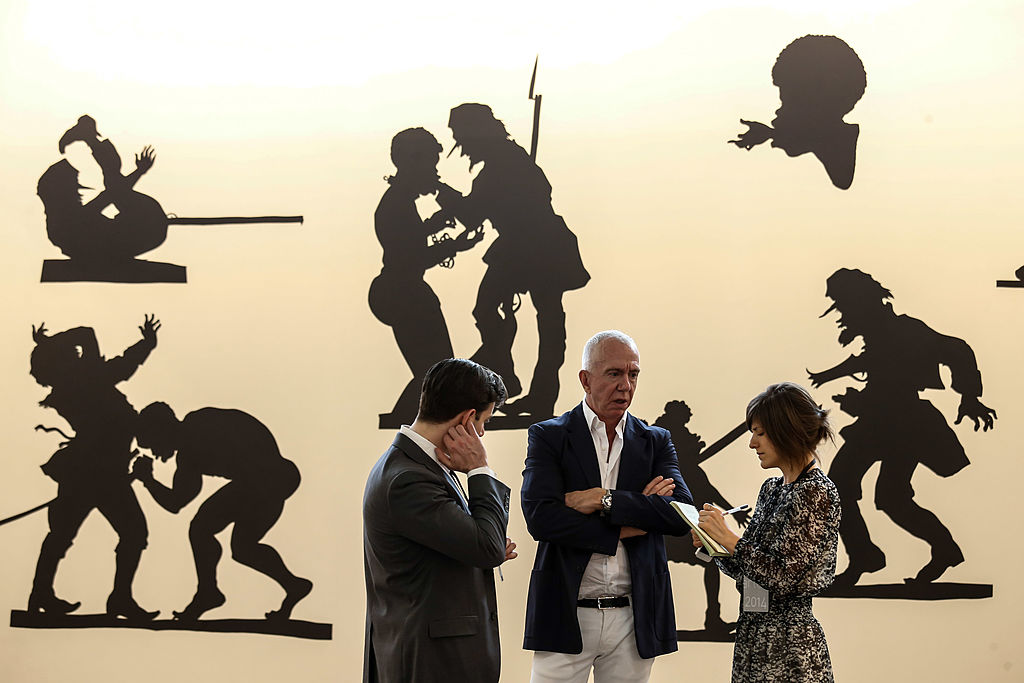 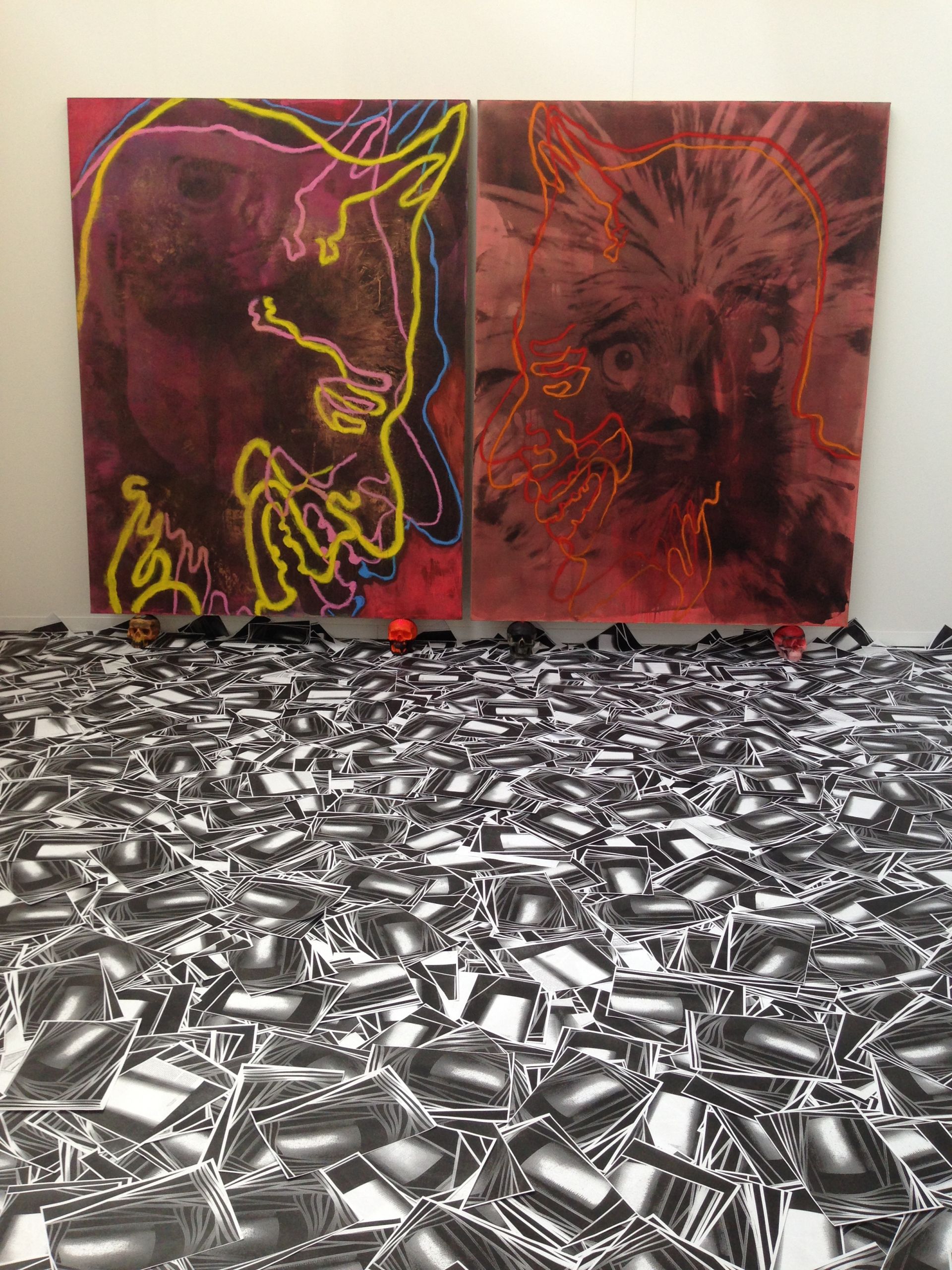 The booth of The General Store, featuring works by Pete Wheeler (wall) and Antoine Aguilar (floor) at Art Brussels in 2016.
Guelda Voien 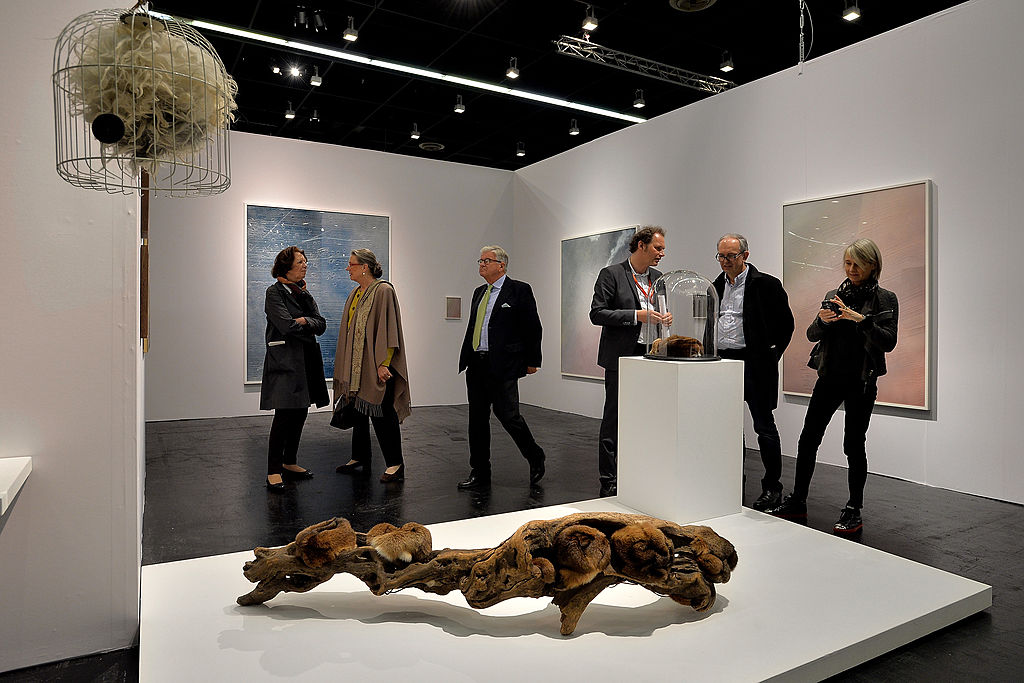 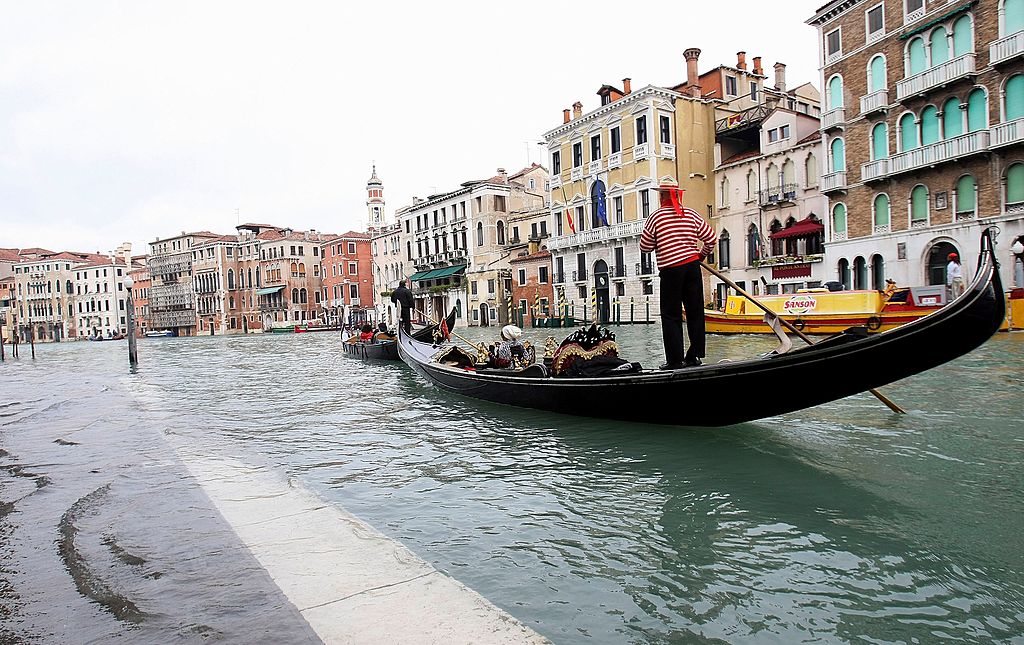 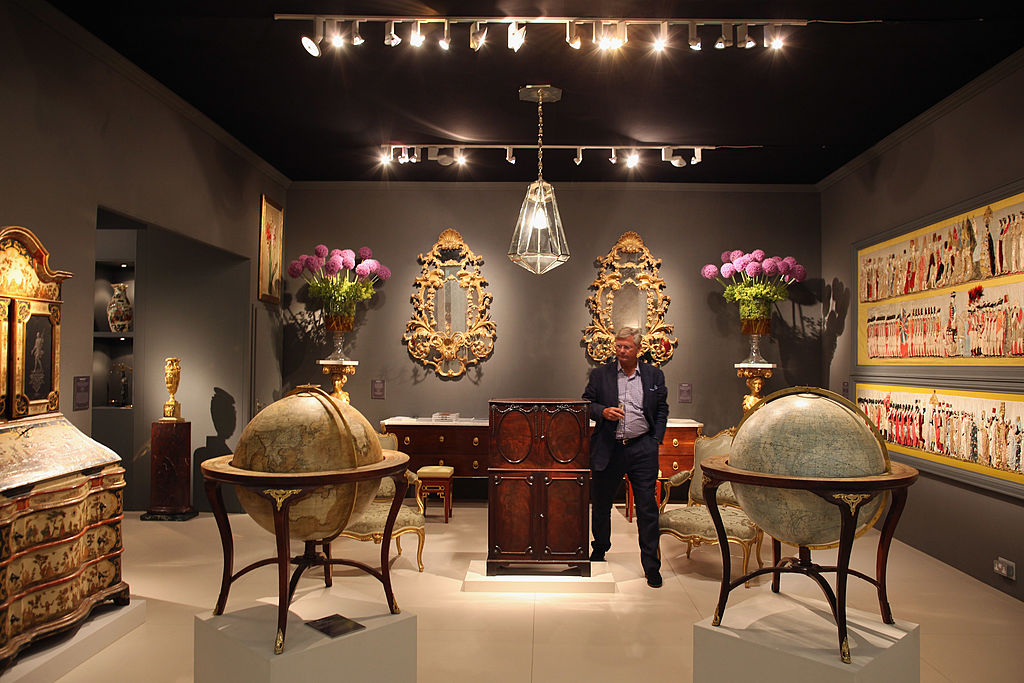 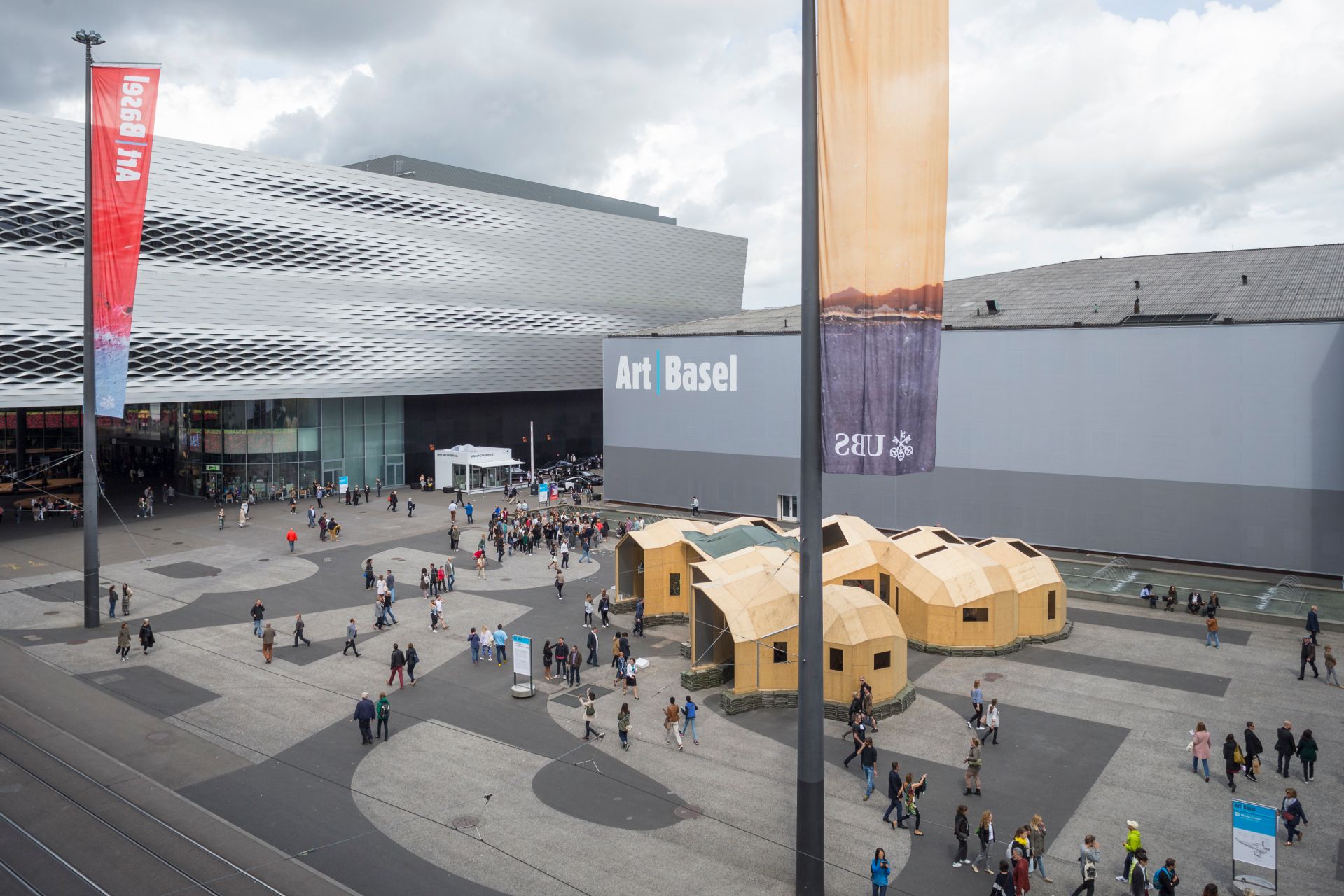 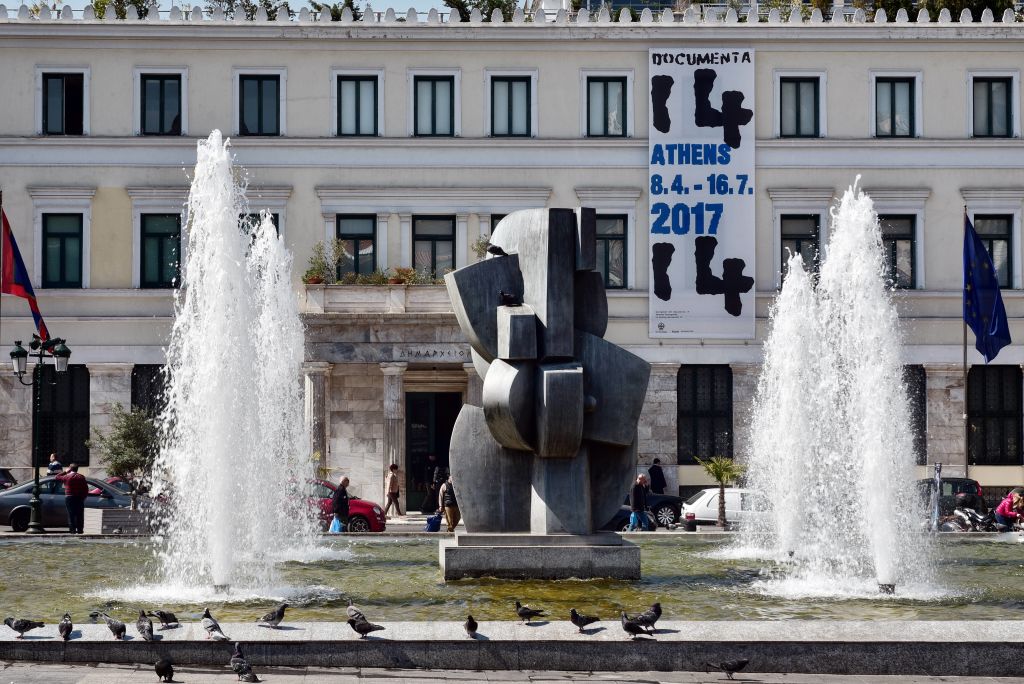 A banner advertising the prestigious contemporary art festival 'Documenta' to be held in Athens from April 8, 2017.
LOUISA GOULIAMAKI/AFP/Getty Images 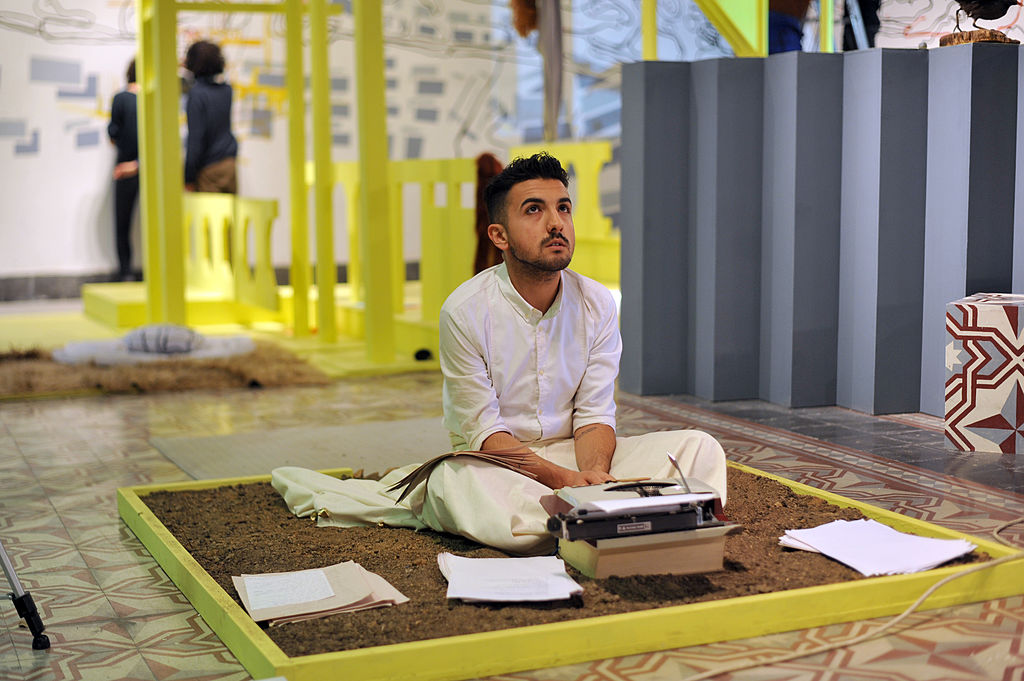 An artist performs an art work during the 13th Istanbul Biennial on September 24, 2013.
OZAN KOSE/AFP/Getty Images 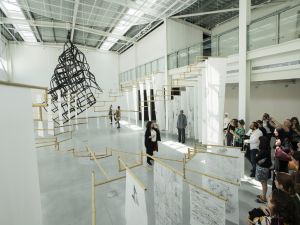 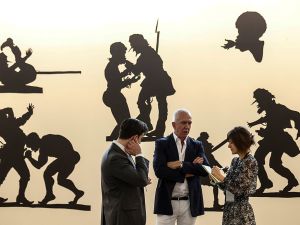 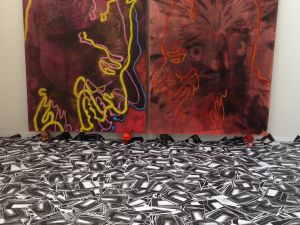 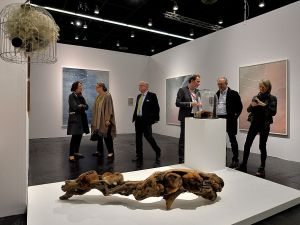 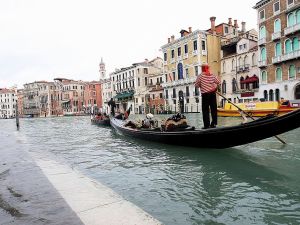 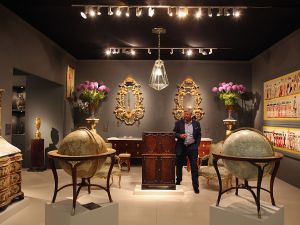 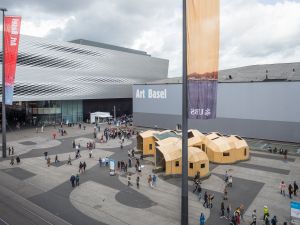 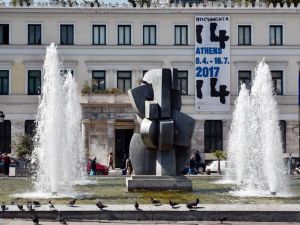 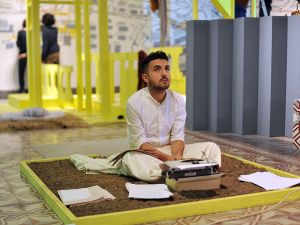 Many an exhibit is hailed as “sprawling,” but this one winds in and out of the architectural features of a cinematically Middle Eastern city in a way that gives new force to the overused word. With indoor and outdoor spaces flowing in and around the Sharjah Art Foundation, curator Christine Tohme has made a very conceptual exhibit in a perhaps unlikely spot: a smaller, more conservative Emirate, not even as known to Westerners as its neighbors Abu Dhabi and Dubai, where you can’t even have a glass of wine. Many solo and two-person exhibit spaces and a profusion of video art make the biennale a must-see for the serious art consumer. This is a welcome departure from the endless abstract painting one sees at art fairs.

The first art triennial in Russia premiered this March and runs until mid-May. The well-heeled Garage Museum, Russia’s first contemporary art outpost, spearheaded the event, which will show only works by Russian artists created in the last five years. Participants include art collectives called things like Agency of Singular Investigations, Gentle Women group, and the Micro-art-group. It’s sure to be an important look at art Americans aren’t likely to see elsewhere. And the ambitions of the show—the largest contemporary survey ever in the country—should not be underestimated. “Just as the revolution encouraged Russia’s first avant-garde, Garage hopes to spur the next,” the museum said when they announced the event last year, according to Art Forum.

The Sao Paulo-based art fair opens in early April and may be the most commercial South American art extravaganza. As Sao Paulo comes into its own as an art center, the fair’s profile rises. This year, a number of New York dealers are heading south and Luiza Teixeira de Freitas, a young London-based Rio-born curator, is making her mark with the fourth annual solo section, which has attracted attention each year.

Art Brussels is a fantastic fair for serious collectors, where you don’t have to wade through youngsters who look like they just got kicked out of a band in Williamsburg to consume the art LINK. Last year, they added another satellite fair to art week in an airy, beautiful space. And the second annual edition of Independent Brussels promises to be just as lovely, given how the New York version of the Independent fair LINK turned out. Brussels is also a fun visit—it’s the city other than New York where Barbara Gladstone has a gallery and the collectors come for the art, not the champagne, as a rule.

Billing itself as “the world’s oldest art fair for modern and contemporary art of the 20th and 21st century,” Art Cologne was founded by Rudolph Zwirner in the 60s and has a reputation for being restrained and forthright…basically just what you’d expect of a German art fair. Last year, the fair announced a new section for emerging galleries, which is defined as those less than ten years old. If you’re heading to Europe for Art Brussels or the Triennial, perhaps a stop-in at Art Cologne can round out the trip. It’s also right before tax time, which might put you in the mood to, ahem, bulk up your business expenses.

In May the Biennale, likely the years hottest ticket, opens, and you might not want to be in Venice, actually. We’d suggest going in the later months when you might be able to book a hotel room or get a taxi. This year, the art event that will make and break several careers has the strangely simple theme “Viva La Arte.” We suppose in these trying times, yes, sure. But it’s unclear what will this means for the huge showcase, which, with art from 89 countries, really needs a cogent central idea. New highlights this year include Georgian Vajiko Chachkhiani, who will fashion the Georgian Pavilion into a traditional Georgian home, Australian artist Tracey Moffat, who says she hopes her country’s pavilion, where she is exhibiting, will be “terrifying,” and the Biennale’s first pavilion from Nigeria.

For those more interested in antiquities and items of historical import, Masterpiece is probably your fair. The show provides the opportunity to peruse the finest in items both quirky and grand from dealers from around the world. It also integrates some Modern and Contemporary art, fashioning itself as the one-stop shopping destination of the art world. And if that’s not enough, the fair takes place on the historic 300-year-old grounds of the Royal Hospital Chelsea.

The art fair that’s practically a metonym for the commercial art world is reportedly more restrained than some of the others that have grown up since Art Basel’s naissance 48 years ago. The dinners and parties are half the fun, as is the case in the Miami version of the fair, but they’re less likely to involve crass gestures like a giant golden wooly mammoth courtesy of Damien Hirst and a real estate developer LINK. But book your travel soon. The 48th annual event will have lodging eaten up well in advance. As for what to see there and who will go? The answer is basically everything over a certain price point and everyone who can.

The site-specific non selling exhibition is sort of the creme de la creme of contemporary art shows—Documenta only happens every five years. It’s coming your way in April in Athens and in July in Kassel, Germany. The event is notoriously shrouded in secrecy, but with its new Athens component this time around, the likelihood that much of the work looks at political upheaval relating to the refugee crisis in Europe seems very high. Known as the “museum of 100 days,” the massive show—there are 150 artists and the whole thing cost about 34 million euro to put together, according to reports—also only costs €22 to attend.

The first thing you think about Istanbul is probably not “they have a really progressive and interesting Biennale,” however, this is true by many accounts. Political upheaval could disrupt the burgeoning scene there—there are a number of fairs, too, although some have been cancelled in the last year—but this fall’s Biennale will likely be the test. Come September the dynamic duo Elmgreen and Dragset—veterans of well-received pavilions at the Venice Biennale and the now-iconic Prada Marfa—will curate the 15th annual Istanbul Biennale, which, while details so far are scant, is sure have some surprises in store.