Nanomachines are tiny molecules – more than 10,000 lined up side by side would be narrower than the diameter of a human hair – that can move when they receive an external stimulus. They can already deliver medication within a body and serve as computer memories at the microscopic level. But as machines go, they haven’t been able to do much physical work – until now.

My lab has used nano-sized building blocks to design a smart material that can perform work at a macroscopic scale, visible to the eye. A 3-D-printed lattice cube made out of polymer can lift 15 times its own weight – the equivalent of a human being lifting a car.

Our polymer is able to lift an aluminum plate when chemical energy is added in the form of a solvent.

The design of our new material is based on Nobel Prize-winning research that turned mechanically interlocked molecules into work-performing machines at nanoscale – things like molecular elevators and nanocars.

Rotaxanes are one of the most widely investigated of these molecules. These dumbbell-shaped molecules are capable of converting input energy – in the forms of light, heat or altered pH – into molecular movements. That’s how these kinds of molecular structures got the nickname “nanomachines.”

For example, in a molecule called [2]rotaxane, composed of one ring on an axle, the ring can move along the axle to perform shuttling motions.

So far, harnessing the mechanical work of rotaxanes has been very challenging. When billions of these tiny machines are randomly oriented, the ring motions will cancel each other out, producing no useful work at a macroscale. In order to harness these molecular motions, scientists have to think about controlling their three-dimensional arrangement as well as synchronizing their motions.

Molecular beads on a string

Our design is based on a well-investigated family of molecules called polyrotaxanes. These have multiple rings on a molecular axle. In our new material, the ring is a cyclic sugar and the axle is a polymer.

If we provide an external stimulus – like adding – these rings randomly shuttling back and forth can instead stick to each other and form a tubular array. When that happens, it changes the stiffness of the molecule. It’s like when beads are threaded onto a string; many beads slid together make the string much stronger, like a rod.

Our approach is to build a polymer system where billions of these molecules become stronger with added . The strength of the whole architecture is increased and the structure can perform useful work.

In this way, we were able to get around the original problem of the random orientation of many nanomachines together. The addition of locks them into a stationary state, therefore strengthening the whole 3-D architecture and allowing the united molecules to perform work together.

Our research is the first to add 3-D printability to mechanically interlocked molecules. It was integrating the 3-D printing technique that allowed us to transform the random shuttling motions of nano-sized rings into smart materials that perform work at macroscopic scale.

Getting the molecules all lined up in the right orientation is a way to amplify their motions. When we add , the rings of the polyrotaxanes stick together via hydrogen bonds. The tubular arrays then stack together in a more ordered manner.

It’s much easier to get the molecules coordinated while they’re in this configuration as opposed to when the rings are all freely moving along the axle. We were able to successfully print lattice-like 3-D structures with the rings locked into position in this way. Now the molecules aren’t just randomly positioned within the material.

After 3-D-printing out the polymer, we used a photo-curing process – similar to the UV lamp that hardens nail polish at a salon – to cure it. We were left with a material that had good 3-D structural integrity and mechanical stability. Now it was ready to do some work.

Shape changing back and forth

The three-dimensional geometry of the polymer is crucial for its shape changing. A hollow structure is easier to deform than a solid one. So we designed a lattice cube structure to maximize its shape-deformation ability and, in turn, its ability to do work as it switched back and forth from one state to the other.

The next important step was being able to control the work our polymer could do.

It turns out the complex 3-D architecture of these structures can be reversibly deformed and reformed. We were able to use a solvent to switch the threaded ring structure between random shuttling and stationary states at the molecular level. Exchanging the solvent let us easily repeat this shape-changing and recovery behavior many times.

This is how we converted chemical energy into mechanical work.

Just like moving beads to strengthen or weaken a string, this shape-changing is critical because it allows the amplification of molecular motion into macroscopic motion.

A 3-D printed lattice cube made of this smart material lifted a small coin 1.6 millimeters. The numbers may sound small for our day-to-day world, but this is a big step forward in the effort to get nanomachines doing macro work.

We hope this advance will enable scientists to further develop smart materials and devices. For example, by adding contraction and twisting to the rising motion, molecular machines could be used as soft robots performing complicated tasks similar to what a human hand can do.

Chenfeng Ke is an Assistant Professor of Chemistry at Dartmouth College. This article was originally published on The Conversation. Read the original article. 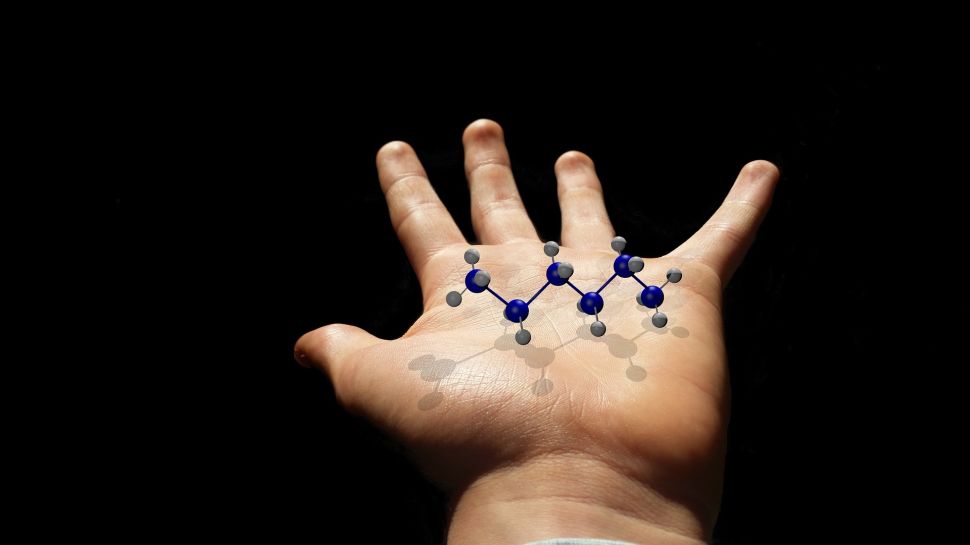