Every other year, and now three years after its last iteration, the Whitney Biennial forces curators and critics to come up with generalizations about an exhibition that is itself an amalgam of things. My favorite was a fatuous headline from WNYC, something like ”Finally, a Biennial that you can’t bash.” It’s faint praise indeed, but it’s also a proprietary warning (from a public broadcaster?) that strong criticism shouldn’t be made of work that often has an inflated sense of its own importance.

I’ll leave those fights for others, but I’ll simply say that this edition of the Biennial was underwhelming, given what’s out there in contemporary art. The purported rise of painting cited by some critics  (again?) doesn’t live up to its promise here. And the politics of the works on view, often presented with art’s version of a megaphone, reminds us why our expectations of Biennials are low.

But there’s work to like and to admire. Here’s some that you should not miss.

Larry Bell, who is 77, is part of this year’s Biennial with Pacific Red, a series of six-foot-high cubes in red glass on the terrace off the fifth floor of the Whitney building. Bell’s medium is light as much as it is glass, and on theMonday of the Biennial’s press preview, when the sun was shining outside, those cubes were luminous, radiating the light from the sky that cast shadows in varying tones. When you looked through them, the urban landscape outside was tinted. I wasn’t at any of the Biennial parties in the snow, where I imagine the terrace might have been closed for safety reasons. Who wants drunks slipping and falling or walking into glass boxes? Yet I could imagine the red cubes, rimmed with snow, as modernistic arctic structures, or as shapes glowing through the elements somewhere in the Russian winter.

The galleries in the Renzo Piano Whitney are best described as generic space, more commodious than grand—commodious, that is, if the installations aren’t too big. If there’s a special character to the structure, it comes from the vantage points that it provides for looking away from it, toward the Hudson River and beyond, or toward the urban fabric under construction and under gentrification to the north, east and south. With Bell’s Pacific Red, you got that in crimson shades.

At the other end of the floor, with The Meat Grinder’s Iron Clothes by Samara Golden, you get another view, and much more, in an infinity of reflections. This illusionist work takes some explaining for those who haven’t stood in its frame.  Visitors walk onto a balcony, an esplanade that looks down onto the river. On each side, floors constructed by Golden are decorated, if you can call it that, and mirrors that reflect on the floors and ceilings are placed to create what looks like an unending series of reflections.

Approaching the work, you think it might be a meditation on the gentrification all around outside, yet there are floors on which Golden depicts a multiplicity of conditions, from finery to filth; literally, in the form of toilets. The mirrors that call to mind the Hall of Mirrors at Versailles are hypnotic as you look downward. Welcome to the anti-Versailles. It’s a stunning visual experience.

At the west side of that floor, the fairest description of the work of Raul de Nieves is that it tries hard to be stunning. In beginning & the end neither & the end neither and the otherwise betwixt & between the end is the beginning & the end, Nieves seizes on the wall-sized window of that façade with panels that look like stained glass from a church, except that his motifs are decidedly pagan. Hippy pagan, that is, as the title suggests. The light shines through his palette of reds and earth-tones to take you back to the all-over decoration that you found in theaters and other public buildings conceived in Maya and Aztec themes, with human figures part of an ambitious energetic choreography. There’s plenty of room to sit in front of it and take in the glow, and I expect some young visitors may be touched enough to look away from their mobile devices. Most of them won’t notice the clear affinities with the work of Keith Haring, who is now two generations in the past, and would have been old enough to be their grandfather. (To see a real Haring, head to the exhibition of paintings from the 1980’s that’s now on the eighth floor of the building, although it’s not a work that shows how closely Nieves is walking in his footsteps.)

Bell, Golden, and Nieves seize on opportunities provided by the Piano structure, although most of the work on view fits the contour of a group show, even if it’s a group of what Michael Lewis might call works that aspire to be “new new things”. Among the paintings in that mix, a room of work by Shara Hughes made you feel that what you were seeing was coming directly out the artist herself, and wasn’t a message that she was mediating.

My favorite by Hughes was Beautiful Truth, an array of horizontal strands in green and yellow. Not lines and not brushstrokes with any overly aggressive verve, Hughes’s upright shafts of color replace the struggle that you see in so much abstract painting with an exuberance that seems soft and effortless.

Not all her work is abstract. Split Ends is a landscape with the feel and saturation of fauvism and rustic elements the Arts and Crafts movement of a century ago.  Like much of her work, it’s a gentle approach to a subject that seems gentle enough, a meandering river. The river, however, ripples with red as it winds through land where green fields are also scarlet. My politically minded friends could see this as a vision of the global warming. It could just as easily be a salute to a style with plenty of territory to explore.

Landscape tends not to be the subject of work at the Biennial, unless it’s an urban topography where photographs get under your skin with stories told up close. There’s some of that on view.

I was drawn to the photographs of An-My Le, who was born in Vietnam. Her pictures at the Biennial are all images of Louisiana, although not from the tourist bureau, with an ultra-precise focus that calls to mind the ever-present effects of high definition video. There’s a windblown swamp that’s been overtaken by , with a few trees hanging on. There’s a panoramic view of a battlefield and trenches that turns out to be an outdoor version of a backstage shot of a crew filming that scene. These days, this is about as close to war that most of us ever come.

One picture by An-My Le that stood apart was November 5, Sugar Cane Field, Houma, Louisiana. Most of this image is smoke. You get the sense that the charred earth is being sacrificed to something. Up above, a circle shines through. Is it the moon or the sun? Whichever, it’s magical, and it isn’t. You think back to the visions of Henri Rousseau, minus any romance about nature and whatever might have once inhabited that landscape.

The politics on the walls tended toward the in-your-face approach. There were moments when that worked best, as with THE TIMES THEY AINT A CHANGING, FAST ENOUGH by Henry Taylor, a painting which depicted a policeman killing in July 2016 of Philando Castile at the wheel of his car outside Minneapolis. The event was videotaped on a cell phone by Castile’s fiancée, Diamond Reynolds, who sat next to him in the front seat. It’s hard to get more immediate than that. Yet Taylor gives us a scene that’s jolting in its directness, and in the deliberate crudeness of the way he painted it. In the age of image-glut, the digital record of Castile’s death risks passing into the oubliette of You Tube. Here Taylor seems out to make sure that the shots that hit Castile will hit you with a thud. But as your eye moves across from a hand with a gun to a man sprawled inside his car, it becomes a memorial. 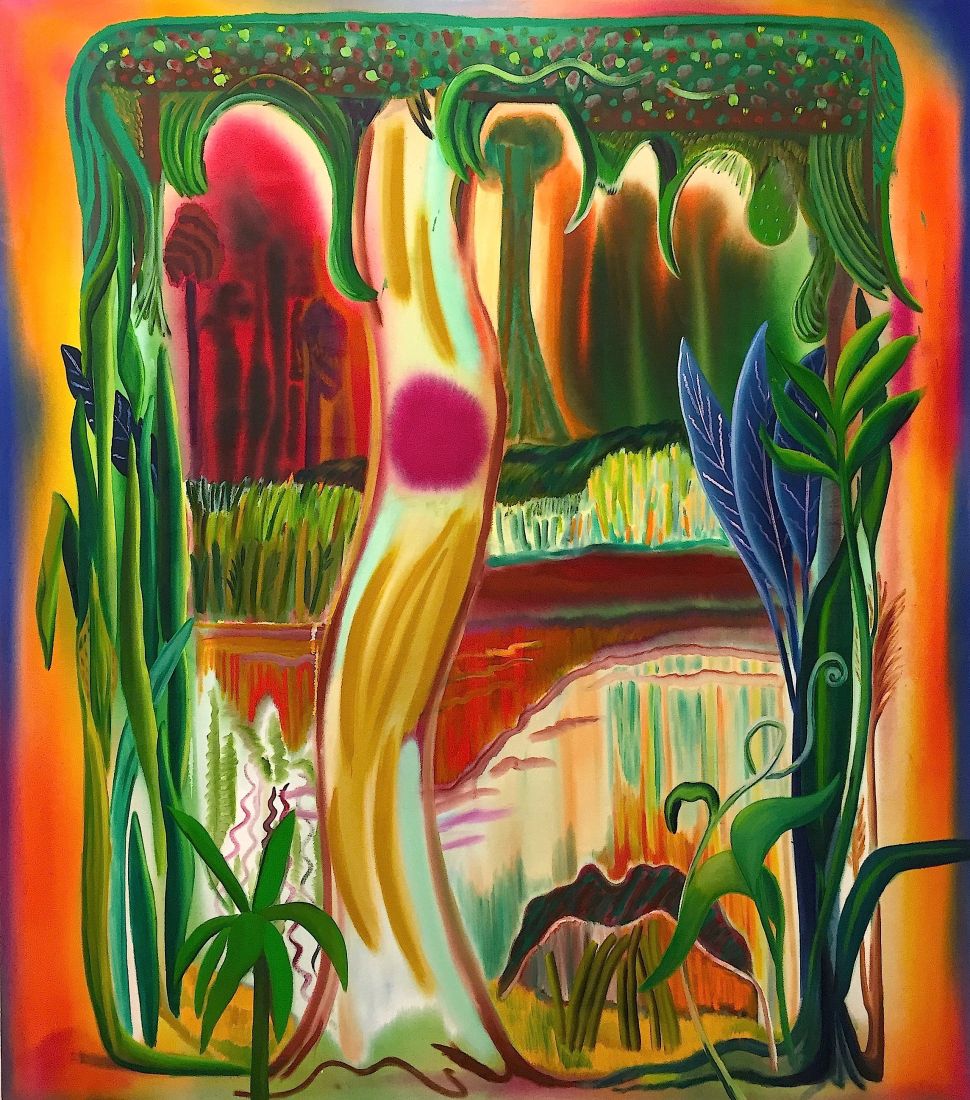