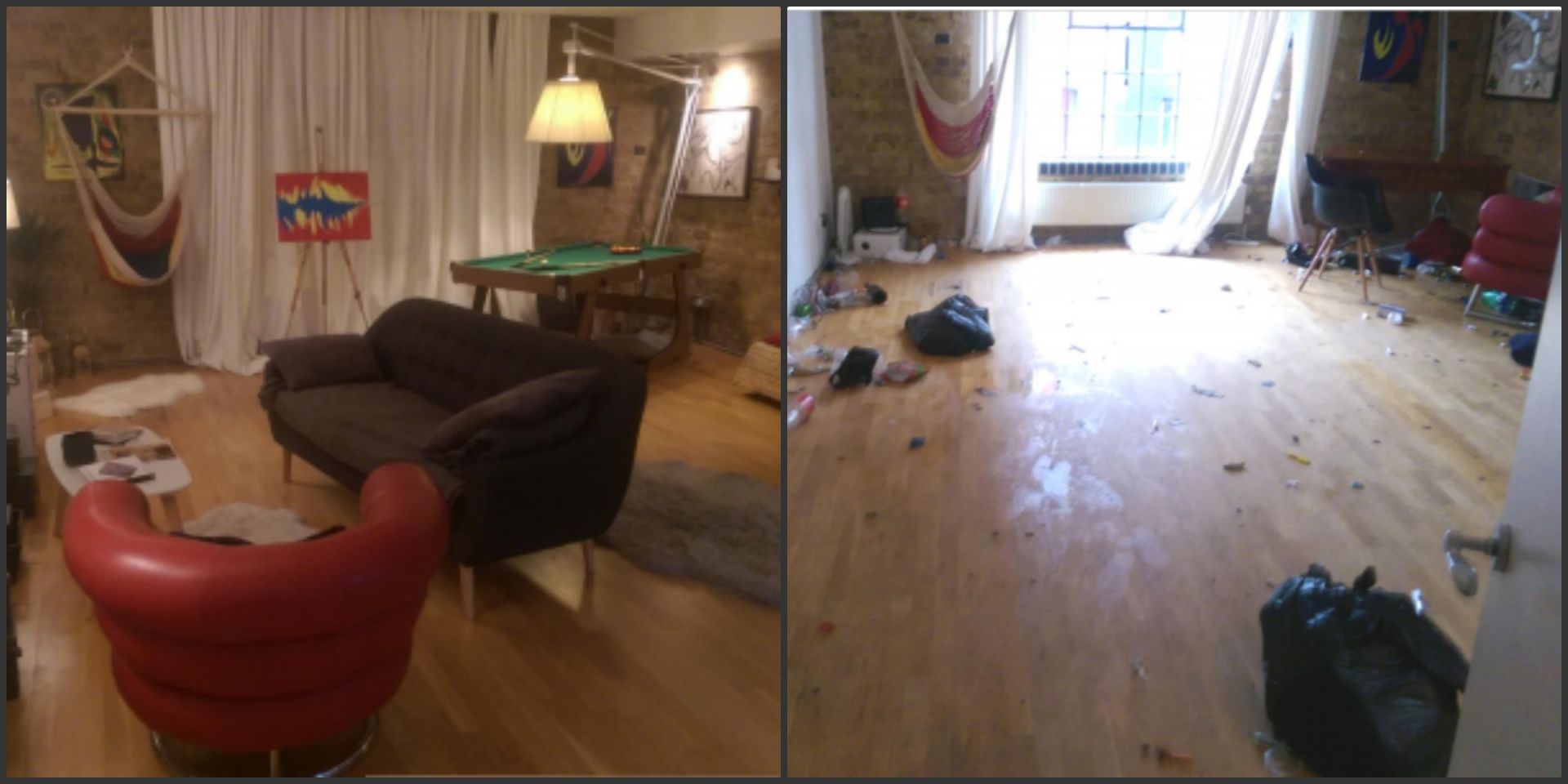 Before and after the party.
Luciano Dinulescu 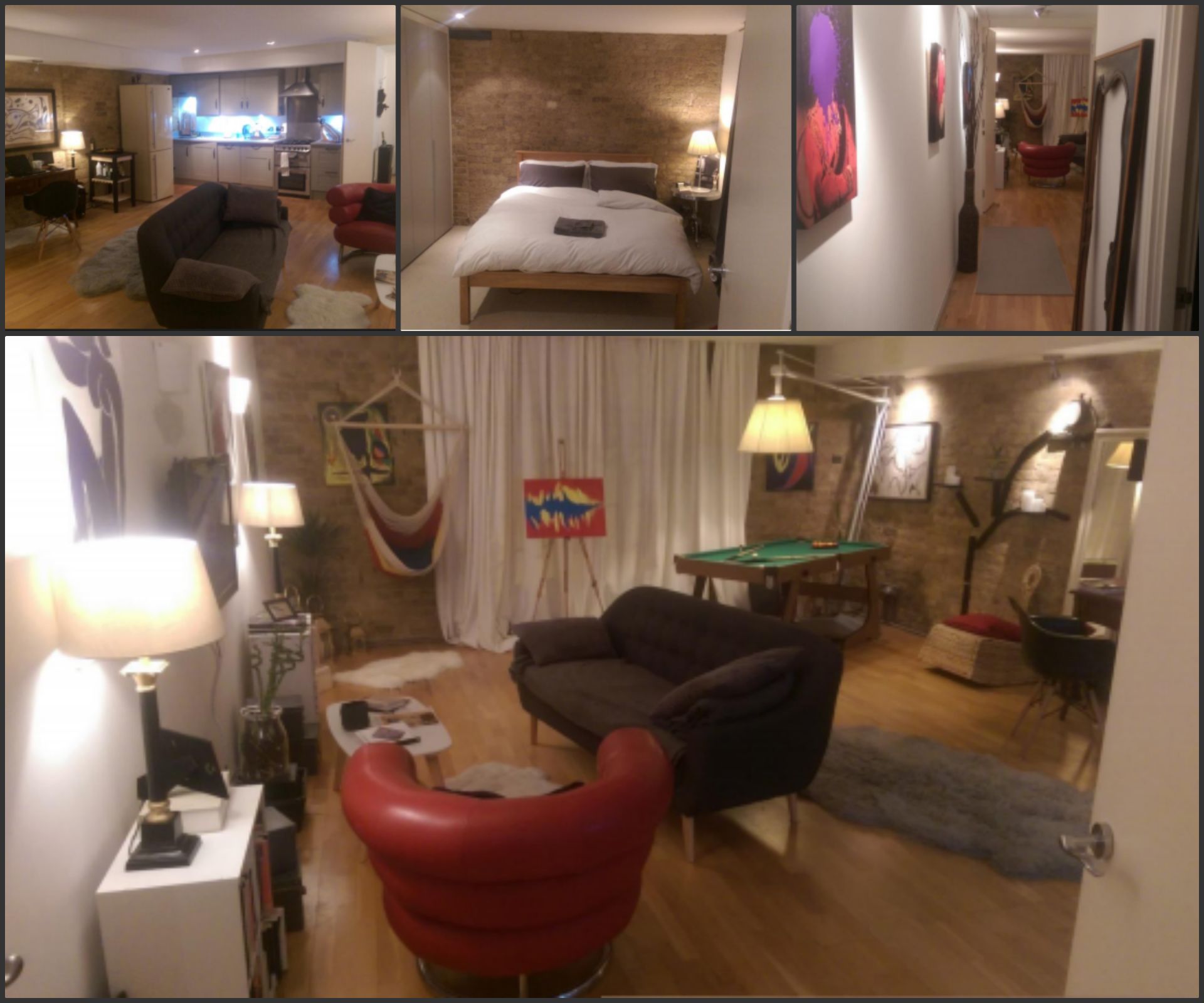 Before images of the apartment. Keep scrolling to see the damage.
Luciano Dinulescu 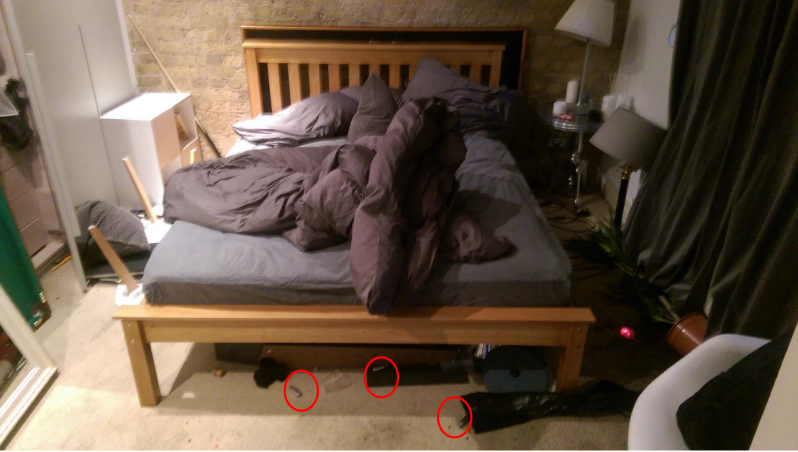 The bedroom, with linens soaked in alcohol and other drugs.
Luciano Dinulescu 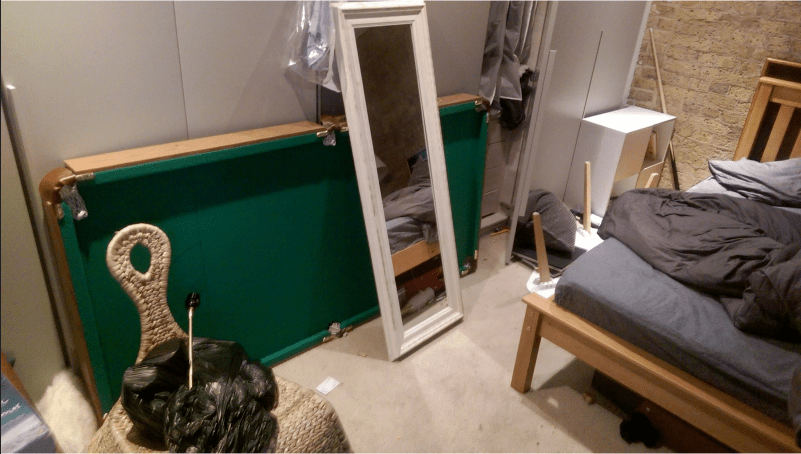 The legs were broken off the pool table, and it was brought from the living room to the bedroom.
Luciano Dinulescu
Advertisement 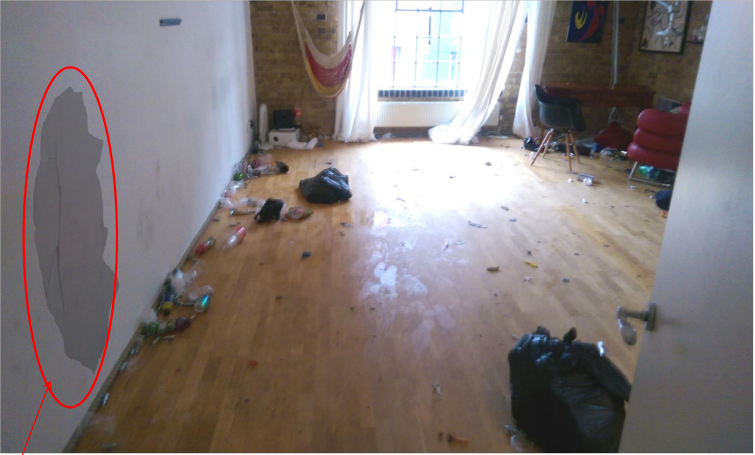 One of several large cracks in the walls. The TV is also missing here and was found broken underneath the bed.
Luciano Dinulescu 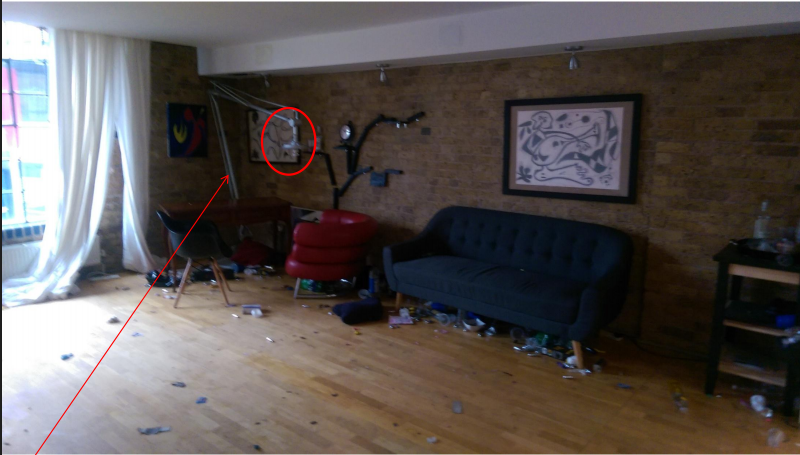 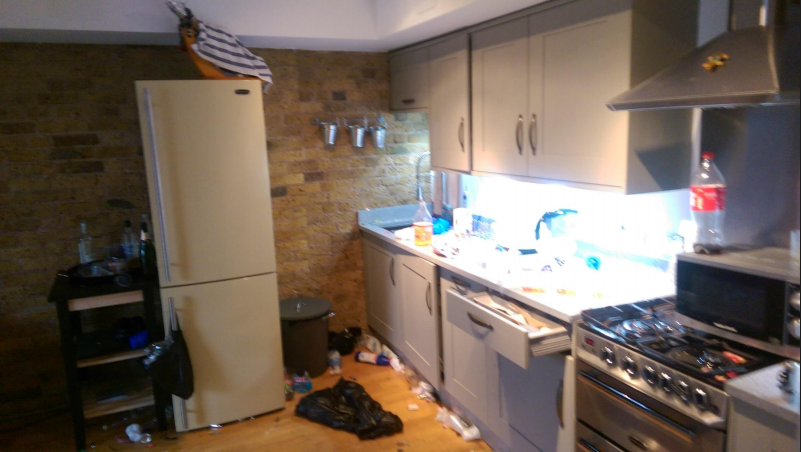 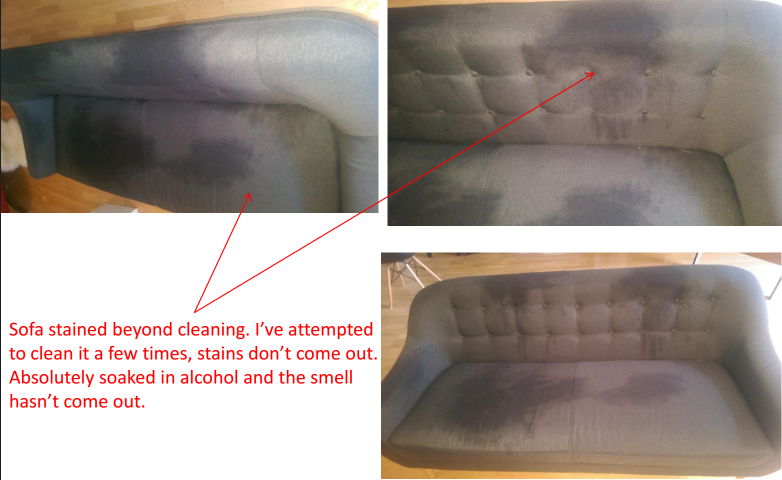 Damage to the couch with Paul's description.
Luciano Dinulescu 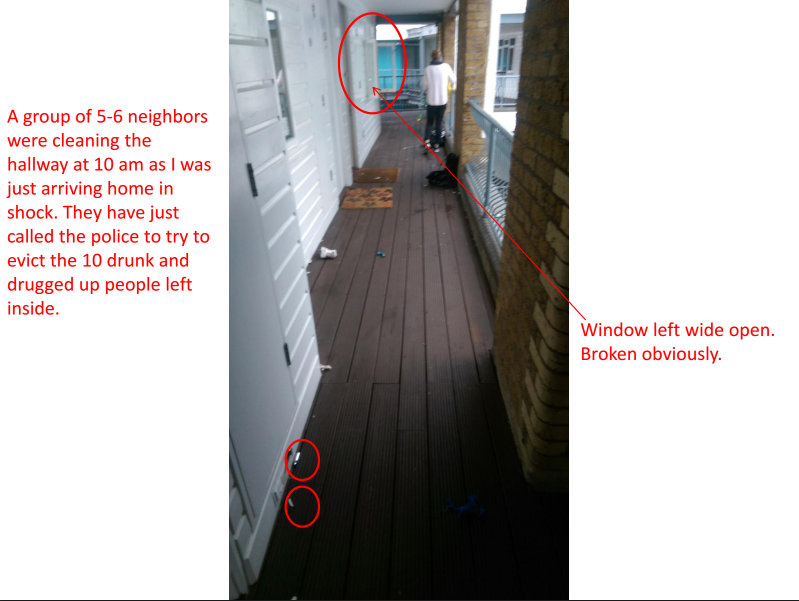 A look at some of the trash left outside.
Luciano Dinulescu 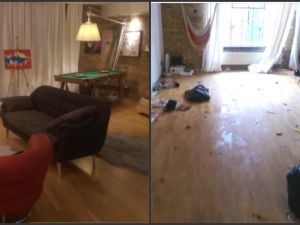 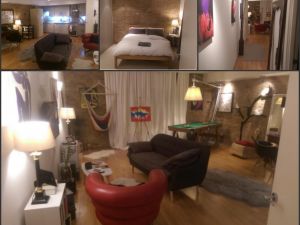 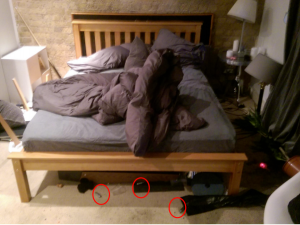 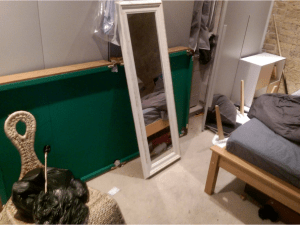 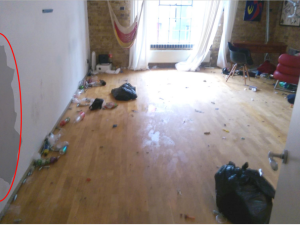 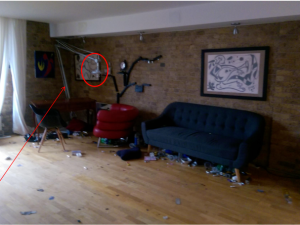 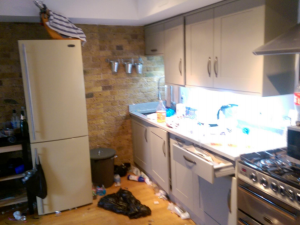 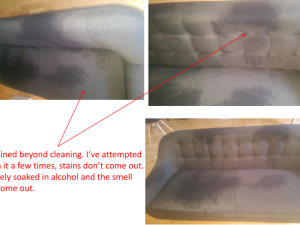 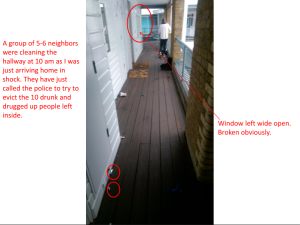 This isn’t your average story of Airbnb guests throwing a party and wrecking the place. From the damage itself to Airbnb’s handling of the situation that included trying to shut down this story with money and an NDA, it’s much, much worse.

The party and the damage

Over Christmas, Luciano Dinulescu—who regularly uses Airbnb as a guest—decided to give the other side of the business a try and list his one-bedroom London apartment on the site.

“What I thought would be a no fret two-night hosting turned into a rave party with over 200 hooligans completely destroying my flat,” Dinulescu told the Observer. “They barricaded themselves inside with 14 police officers being unable to get them out until morning.”

During the party, the unwelcome guests overflowed out of his unit into the entire apartment complex, where they partied to blaring music (they came with a professional sound system), urinated all over, fought (with each other and the neighbors) and took drugs to the point of passing out in the stairways, hallways, courtyard and other public areas. Neighbors called the police five times and some partiers left, but most remained and locked themselves inside to continue partying.

The next day, nearly every single thing inside the apartment—furniture, art collectibles, the pool table, the walls, the windows, everything—was damaged or completely ruined, as can be seen in the slideshow above. In the public areas of the apartment complex, drug and alcohol trash was littered everywhere, and the partiers broke the security gate and even the elevator. Last month, Dinulescu’s lease was up and the landlord wouldn’t let him renew because of this incident alone.

This, however, was only the beginning of Dinulescu’s nightmare. What has ensued since that night has been nothing short of a nightmare for Dinulescu and bad business practice for Airbnb.

Trying to get that money

Airbnb has a $1 million host guarantee for covering damages and “booking income loss,” which comes into play when subsequent reservations have to be cancelled because of damages. The host is responsible for repairing all damages and then submitting a claim to Airbnb’s Trust and Safety team for reimbursement.

Of course this comes with procedures and conditions pertaining to what can be claimed, how quickly this must be done and what evidence is required. Airbnb’s guarantee says that the length of the process will vary depending on the severity of the case, the quality of documentation and the cooperation of the host and guest, but that they “strive to resolve most cases within a week of submission.”

After the destruction of his apartment, Dinulescu immediately filed a claim and 34 pages of photos and reports detailing the damages, which came to a total cost of around £6,400 (about $8,000). After two months, he finally heard from a representative, Peter, who asked him to submit a claim and evidence. Dinulescu had already done this—a fact that didn’t seem to get across to Peter and caused the two to go back and forth with several more frustrating emails over the course of about two weeks. Here’s their first exchange: 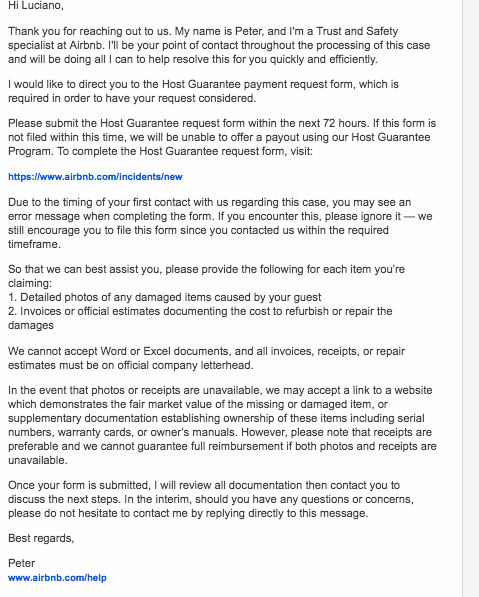 The rest of the email exchange can be found here, and below is a summary:

To this, Peter responded again asking for documentation of the damages.

Dinulescu replied that he did indeed submit this already.

Peter responded asking for photos of damage to the desk. He also explained he needed receipts for cleaning of the couch and carpet because Airbnb will only pay to clean those items, not replace them.

Dinulescu replied, stating he 1) never claimed damages for the desk (or blinds) 2) did submit a receipt for the carpet cleaning and 3) Airbnb better pay for the carpet replacement because, as he detailed, it was too damaged to be cleaned and he had been told on the phone by an Airbnb representative that the replacement would be covered if it was unable to be cleaned.

Peter responded he was still missing documentation regarding the blinds and couch cleaning. He also said that if this is not received within 48 hours, the case would be closed.

Dinulescu replied, again stating 1) he is not claiming the blinds and 2) the cleaning company said the carpet and couch were too damaged to be cleaned.

After going back and forth five times without Dinulescu changing anything about what he claimed or submitting any more forms or documentation, Peter responded that Airbnb would reimburse him £1,403 and asked he accept this and sign the “incidents accept agreement” within 72 hours.

Peter responded, advising Dinulescu to keep the conversation professional and saying the decision to refund £1,403 for the carpet cleaning and repair of the wall is final. This time, he said the offer would be rescinded after 24 hours.

In trying to get a fair reimbursement, Dinulescu called to try to get a new case manager. He was told the case had been closed.

“I felt like it was bullying to accept that offer which is so far from what I spent to fix the apartment,” he told the Observer. “And when I didn’t accept it, they closed the case.”

Regarding his general frustration, he added, “It was hard to deal with. The first thing he emailed me was to file a form, which I did three months ago. Then [he] asked for receipts, which I had sent. It was like, ‘have you even read the case?'”

It looked like this was the end. After a final email stating the case was closed, Dinulescu was left without a refund. But all that changed when Airbnb caught wind of this story.

NDA the problems away

Last Friday, Dinulescu called Airbnb again trying to get his case reopened with a new case manager. He heard nothing.

Then on Monday, the Observer reached out to Airbnb with the case number and a few details about it to confirm the story and ask for a comment. Airbnb press secretary Peter Schottenfels replied that they’re looking into it and will get back to us. A few hours later, Airbnb dropped £1,403 into Dinulescu’s bank account.

This was followed by an email from another Trust and Safety employee named Karsten, who reached out to Dinulescu with the following message stating they’d refund the rest of what he was asking for if he signs a non-disclosure agreement (NDA), which is linked here: 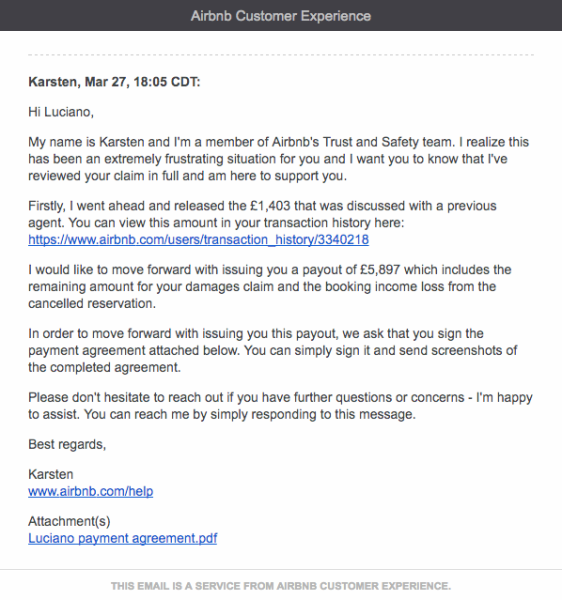 Note this is not the same agreement Dinulescu was asked to sign the first time around. That was a generic agreement made available via link. This new contract was a PDF that, per the file name, appears to have been made specifically for him. It says that by signing it and accepting the payout of £5,897, he will “provide Airbnb reasonable cooperation” and keep this confidential.

This was all too reminiscent of the NDA Tesla asked customers to sign last year after a defect was discovered, a request that was deemed “unacceptable” by the National Highway Traffic Safety Administration (which issued the warning about the defects).

“It means they just want to get away with it,” Dinulescu told the Observer, saying he refuses to be silenced with an NDA. “It’s a lot of money I’m missing out on. But to see it all happen in 12 hours after months, it’s not the right way. It shouldn’t be with an NDA. And I’m not going to take a punch and then go to sleep.”

Dinulescu—who has founded startups himself and believes that technology should make the world better—says he’s more concerned with making sure Airbnb is held accountable.

“They’re using people’s houses to make money and don’t want to take responsibility,” he said. “They take their commission and they’re hands-off. If it were an insurance company, I would do it. But it’s a platform that depends on people.”

As an aside, when the Observer followed up with Airbnb on Tuesday, things got a little strange, and Schottenfels was on the defense.

“If you don’t mind me asking, why is the Observer interested in an incident that occurred in London?” he asked. We explained we are not just New York-focused and are interested in stories wherever they occur and that tech and business stories, especially, are national and international.

“Is this part of a larger trend piece?” he asked. “Normally you do ‘Airbnb rules for the road’ stories and I can’t see how this one instance a story on its own,” he replied. We’re not sure what ‘rules for the road’ piece he’s referring to, but a quick Google search leads us to believe he had the wrong Observer.

Shortly after this, Dinulescu replied to Karsten’s email to let her know he was declining to sign the NDA agreement.

“If Airbnb wants to solve this case in a just way, and not at gunpoint where I have to waive all my rights, please offer me the payment agreement through your Airbnb incident portal,” he wrote.

They jumped on the phone, and Karsten told him she was unaware he had contacted the media and that having him sign the NDA “was just the fastest way to solve the problem.”

“She suggested several times to make a direct deposit into my account,” Dinulescu said of their phone conversation. “I declined as I thought it a very shady way of dealing, and I requested to have the payment sorted out in a transparent way via their Airbnb [incident portal], governed by the same terms and conditions as the rest of the payments, and no other special clauses.”

She followed up in an email with a link for submitting a new claim for the £5,897, which Dinulescu says he’ll do since it is not under the condition of an NDA.

At the end of all this, Airbnb took the fall and provided the Observer with the following statement:

“Our original handling of this incident fell below the high standards we set for ourselves and are working with the host to make things right. We have zero tolerance for this kind of behavior, have removed the guest from Airbnb and are supporting the host. There have been over 160 million guest arrivals in Airbnb listings and bad experiences are extremely rare.”