At this week’s Satellite 2017 conference in Washington DC, Jeff Bezos announced that his private spaceflight company Blue Origin has signed with French satellite provider Eutelsat to launch their payload to orbit aboard the upcoming New Glenn rocket. The mission will officially mark Blue Origin’s entrance into a space race that is being fueled by the Trump administration’s moon-focused directive and the emergence of space tourism.

Blue Origin intends to fly this first commercial mission for Eutelsat, one of the world’s largest satellite operators, sometime around 2021-2022. The New Glenn rocket will begin test launches in 2020 from Launch Complex 36 at Cape Canaveral Air Force Station which Blue Origins has leased. At nearby Exploration Park, they are building a 750,000 sq ft rocket factory to manufacture the New Glenn rocket which is named after the first American to orbit Earth, the late John Glenn.

When commercial satellite deliveries begin for Blue Origin, it will put them in direct competition with SpaceX, French launch provider Arianespace, and United Launch Alliance, which is co-owned by Lockheed and Boeing. These firms provide regular deliveries of commercial payloads from around the world.

Blue Origin has designed two configurations of the New Glenn rocket. A two-stage version that would be used for the Eutelsat delivery and similar missions to orbit. A three-stage version would have enough power to take payloads to the moon.

A video was released showing a concept animation of the two-stage version of New Glenn launching from Florida’s space coast and utilizing its aerodynamic fins and six deployable landing legs to deliver its payload and return for landing on a barge at sea. SpaceX has successfully recovered its orbital Falcon 9 rocket on a drone ship at sea five times.

The New Glenn rocket will get its powerful thrust from seven BE-4 engines manufactured by Blue Origin. Jeff Bezos tweeted a photo on Monday of a complete BE-4 which has been in development since 2011 and said two more will be ready soon. The engines are designed to fly up to 100 times.

Last week, it was revealed in the Washington Post that Jeff Bezos, its owner, has also been floating a proposal to NASA and President Trump’s transition for Blue Origin to develop a lunar lander spacecraft that would touch down on the moon’s south pole where there is continuous sunlight that can be used for solar energy.

Blue Origin envisions a delivery route to the moon that could enable the regular shipment of equipment to build habitats, scientific experiments, and cargo beginning in the mid-2020s. “It is time for America to return to the Moon–this time to stay,” said Jeff Bezos to the Washington Post. “A permanently inhabited lunar settlement is a difficult and worthy objective. I sense a lot of people are excited about this.” Bezos hopes to use the New Glenn for these “Blue Moon” lander missions which is dependent on a commercial partnership with NASA and requires the agency’s expertise.

If this all sounds familiar, it’s because just recently, Elon Musk revealed that his own commercial venture, SpaceX, will be launching two private citizens around the moon aboard its Dragon Spacecraft which will launch on the deep space capable Falcon Heavy rocket. The still-unknown passengers are paying an undisclosed amount for the trip and have already given SpaceX a “significant deposit.”

It’s no coincidence that both SpaceX and Blue Origin are making their moon intentions known now. The Trump administration is calling for a human mission to the moon in just a couple of years and has asked NASA to review if they can put a crew on a the agency’s Exploration Mission 1 to lunar orbit which was essentially supposed to be an uncrewed test flight.

NASA is currently building the heavy-lift Space Launch System to propel the Orion crew capsule toward the moon and one day, Mars. Orion is being manufactured by Lockheed Martin and has already conducted a test flight in December of 2014. Exploration Mission 1 was scheduled for late next near but adding crew would certainly delay that.

The Trump administration could opt for a commercial carrier to get NASA back to the moon similar to the commercial crew program that will return human spaceflight to American soil with SpaceX and Boeing at the helm. The timing of both Elon Musk’s and Jeff Bezos’ moon announcements suggest they are potentially interested in handling those lunar missions for NASA. Musk has already said that NASA would get priority for a SpaceX-facilitated moon mission over paying customers.

SpaceX and Blue Origin are also racing to make space access sustainable and dramatically cheaper by developing reusable technology. “Our goal, and we won’t stop until we achieve it, is to dramatically lower launch costs,” said Jeff Bezos at the Satellite 2017 conference. “It’s not going to be easy, and it’s going to take time. But when we do achieve that goal, it will grow the entire industry. We’ll reach a new equilibrium in this industry.”

SpaceX’s vision is almost identical. CEO Elon Musk has stated on multiple occasions that making space access cheap is the key to making humans “multiplanetary” and will enable them to “build a city” on Mars. At Satellite 2017, Bezos claimed that “we need a space-faring civilization” and that space tourism is the beginning of “millions of people living and working in space.”

Blue Origin has already made progress developing their space tourism program and reusability technology by flying its New Shepard suborbital rocket at their West Texas development facility. After a suborbital flight on November 23rd 2015, the New Shepard booster was recovered with a smooth vertical landing minutes after liftoff. Blue Origin relaunched the same booster four more times with recovery in 2016.

New Shepherd space tourism flights are expected to begin next year and the company hopes to start flights with test astronauts later this year. Blue Origin’s crew capsule could fly up to 6 passengers at over 2,000mph to the what’s called the ‘Karman Line’ or the internationally recognized line where space actually begins. It’s about 62 miles above the Earth.

Paying customers will launch from Blue Origin’s site in West Texas in the vehicle that boasts the largest viewing windows ever put in a spacecraft but not before they complete two days of training for zero-gravity maneuvering and vehicle operation.

Between SpaceX and Blue Origin, it seems like there will be options for taking a trip to space whether it’s around the moon or just 60 miles above Earth surface. Regardless, it’s going to cost a fortune. 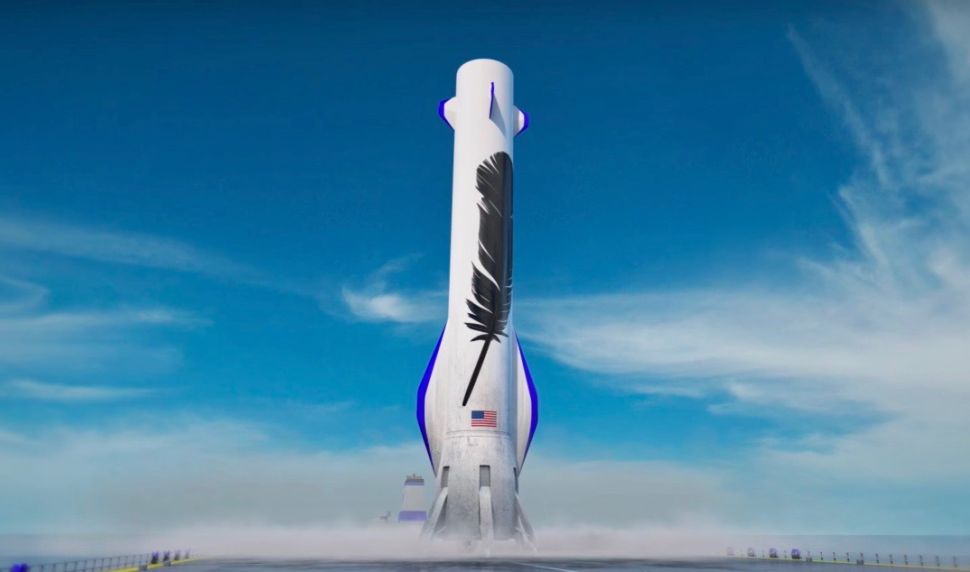