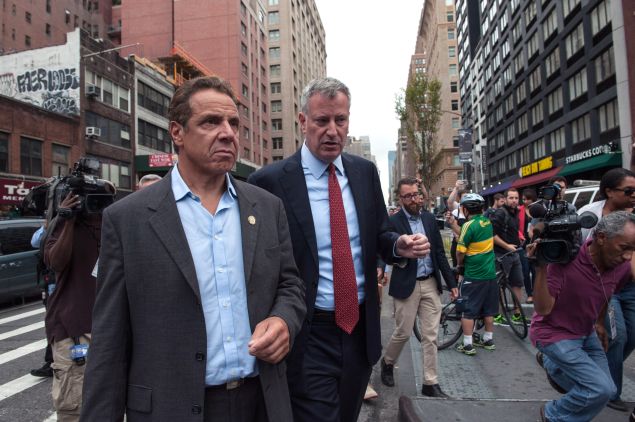 Gov. Andrew Cuomo and Mayor Bill de Blasio tour the site of the bomb blast on in Chelsea in 2016. Stephanie Keith/Getty Images

It seems only one thing gets bitter rivals Gov. Andrew Cuomo and Mayor Bill de Blasio to momentarily lay down arms—bombs, or the threat thereof.

One day after the Jewish Children’s Museum in Brooklyn became the latest victim of a recent rash of hoax explosive scares, the two Democrats announced a joint city-state reward of $20,000 to anyone who divulges information leading to the arrest and conviction of a bias crime offender. The new remuneration quadruples the figure the governor’s office previously offered alone, and marks the longtime foes’ most visible instance cooperation since a makeshift bomb detonated in Lower Manhattan last September.

The pair issued separate press releases, with each man’s office putting his name and quote first.

“We have zero tolerance for intolerance, and I encourage all New Yorkers to report any instance of hate, bias or discrimination,” said Cuomo, who dropped his statement minutes earlier—much as he beat de Blasio to Children’s Museum yesterday by about an hour. “We will continue to aggressively work with our federal and local partners to hold those responsible accountable to the fullest extent of the law, keep our communities safe, and uphold our core values of diversity and inclusion.”

“I’m proud to join forces with the governor as we work with our local, state and federal partners in law enforcement to see that the perpetrators are swiftly brought to justice,” de Blasio said in his statement. “The NYPD is the finest police force in the world and I have no doubt those responsible for these incidents will not be able to hide in the shadows for long.”

De Blasio’s emphasis on the abilities of his police department comes as Cuomo has committed his New York State troopers to solving the bomb threat at the Jewish Children’s Museum, and to a similar intimidation made against a Jewish Association for Serving the Aging center in Midwood, Brooklyn this morning.

“When is enough enough? This is not who we are and not who we should be,” the governor said in a release put out an hour and a half after the reward announcement. “In response to this threat, I am directing the New York State Police to coordinate with federal and local law enforcement to launch a full investigation into this matter. We are committed to bringing whoever is responsible for this egregious act to justice.”

The governor has dramatically expanded state police presence in the five boroughs during the course of his feud with the mayor, and has even authorized his officers to haul homeless people off city streets in subzero temperatures—moves widely viewed as an effort to assert his superior legal authority.

So far, the only major break in the bomb threats investigation has come largely courtesy of U.S. Attorney Preet Bharara, who has a history of tormenting both Cuomo and de Blasio with corruption probes and mocking public statements. Authorities arrested leftist journalist Juan Thompson in St. Louis last week for allegedly using social media and email accounts to post false warnings of volatile devices at the Anti-Defamation League headquarters and Jewish Museum in Manhattan, and to Jewish Community Centers nationwide.

Bharara credited the successful capture to a joint effort of the Federal Bureau of Investigation, the Secret Service and the NYPD.

But the bomb scares have continued unabated since Thompson’s arrest and, according to NYPD Chief of Detectives Robert Boyce, frequently contain similar language—provoking suspicion that they are somehow coordinated. Hate crimes are up by more than 100 percent both in the city and the state as a whole, largely driven by the rise in anti-Semitic incidents.

De Blasio and Cuomo encouraged those with valuable information to either contact the state police task force by ringing (888) 392-3644 during working hours or by texting “HATE” to 81336, or by calling the NYPD at 1-800-577-TIPS. 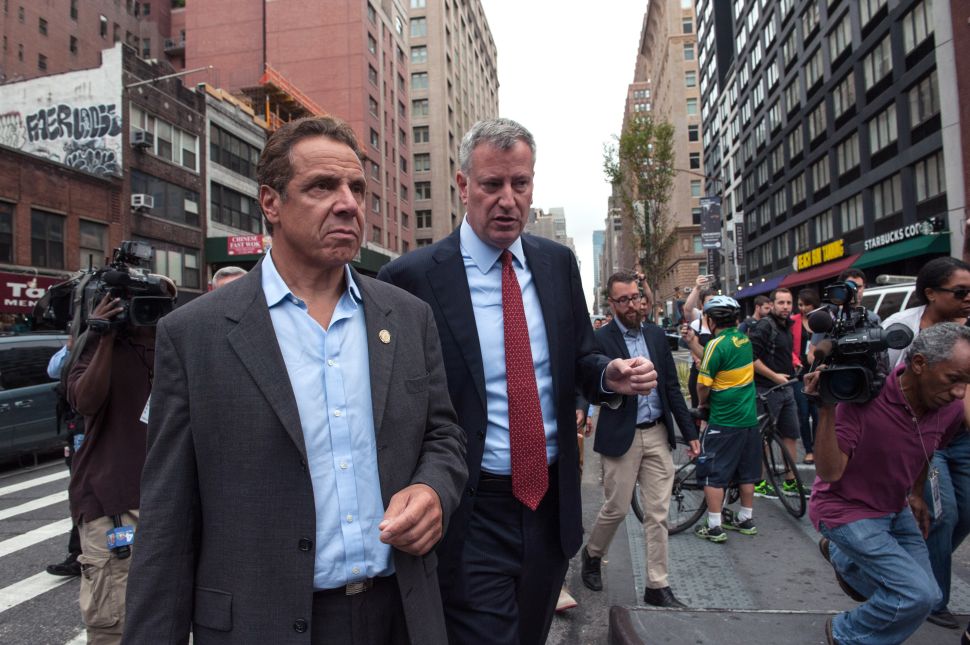