Archaeologists in Cairo have stumbled upon a 3,000-year-old colossal likeness of one of Egypt’s most legendary pharaohs, Ramses II, beneath the streets of a bustling residential Cairo neighborhood. A joint team of German and Egyptian scientists have unearthed large sections of a 26-foot-tall, quartzite statue they believe to be Egypt’s most famous ruler, who reigned between 1279 and 1213 B.C. “It is one of the most important excavations in Egypt,” archaeologist and professor of Egyptology Salima Ikram told NBC News, proclaiming the finds as “spectacular, the things are astonishing.”

“Everyone is really surprised at the scale of the statue,” British Egyptologist Nigel Hetherington told the Telegraph. “I don’t think anyone realized how dramatic it would look and there may still be more to come.”

So far, the statue’s bust and a portion of the head featuring the right ear, eye and crown have been uncovered, said Egypt’s antiquities minister Khaled al-Anani. A smaller, life-size limestone depiction of Seti II, Ramses’ grandson, was also found during the excavation.

The sculptures were found in the Matariya neighborhood of the city, which has been built over the remains of the ancient city of Heliopolis. Their close proximity to the ruins of Ramses II’s sun temple—one of the largest of its kind in Egypt, and twice the size of the the Temple of Karnak in Luxor—has given archeologists strong reason to believe the larger sculpture is a representation of the King.

On the significance of Heliopolis, and any objects uncovered from its ruins, Ikram told NBC the city is “one of the most important religious places in ancient Egyptian history. It is the birthplace of the Sun God and indeed of Egypt and its civilization in terms of Egyptian mythology.”

Dietrich Raue, who is leading the German archaeological team, echoed Ikram by saying, “According to the pharaonic belief, the world was created in Matariya.”

Watch the excavation of the giant sculpture of Ramses II in a video via the Guardian. 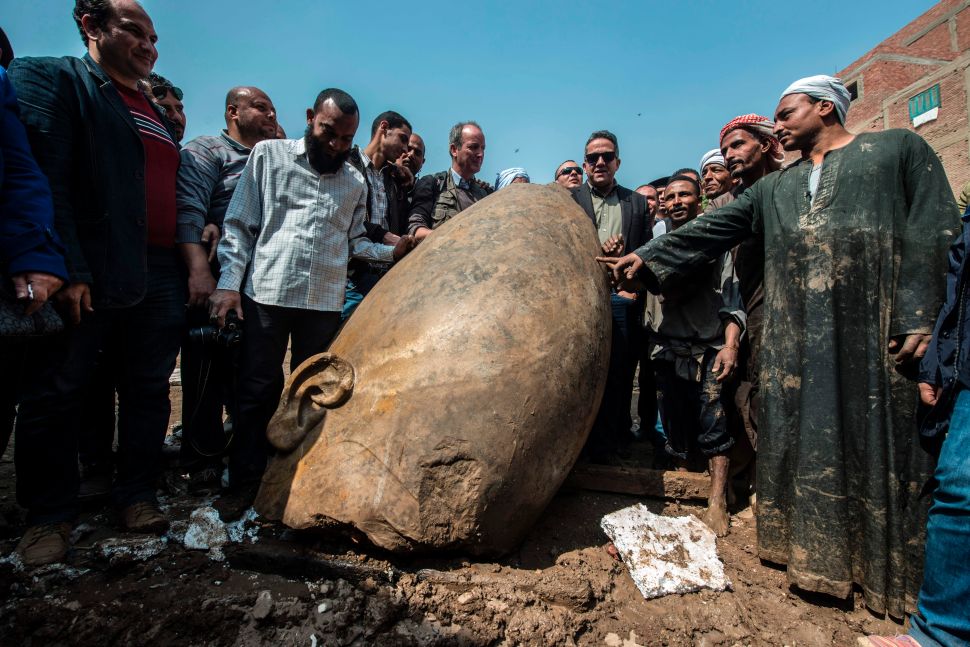