“BARBARA BARRIE (Helene Berman) has been nominated for an Academy Award, a Tony Award and three Emmy Awards. She didn’t win any of them, but she has three wonderful granddaughters: Roxie, Mabel and Lulu.”

There are things that matter and things that matter. Aaron Harnick, lead producer of Amelie April 3 at the Walter Kerr, composed this Playbill bio for his mom, the lit-from-within Barbara Barrie, who opened March 2 at the Booth in Significant Other.

“Can you imagine?” trills Mom. “He’s opening, and I’m opening! We’re both wrecks!”

The Booth is where Broadway began for Barrie (it’s O.K. to say it when) 62 years ago. She performed there all 12 performances of The Wooden Dish, a play by Edmund Morris. It starred—and, perhaps not coincidentally, was directed by—Louis Calhern. “It was a play about aging,” Barrie recalls. “Louis was a man whose daughter wants him to eat from a wooden dish, not a china dish. I was the 16-year-old next door.”

Ah, yes, Barbara Barrie remembers it well. She especially remembers that cast: Jane Rose, John Randolph, Polly Rowles, James Westerfield and Jacqueline Scott. “John Randolph was blacklisted because he was a card-carrying Communist—and proud of it!—but there were protestors outside the theater. Louis Calhern told the company, ‘We’re crossing this line, and we’re doing the show, and John is in it.’ And we did it.”

Nowadays there is much less commotion outside the Booth. Joshua Harmon’s play is about the plight of the modern-day GBF, a gay guy whose best friends keep turning into brides right in front of his eyes, leaving him desperately alone—if not isolated.

In Barrie’s worldview of the poignant little comedy, Harmon’s Jordan Berman (Gideon Glick) is not left entirely alone. She’s there, his widowed grandmother, two generations away, on the elderly edge of loneliness at the opposite end of the scale.

“The playwright may not have thought of this, but who’s left for him at the end of the play? Me. I’m the significant other. I get the guy. His friends are all gone, all married. He has only one person left that he can really confide in. I pointed this out to Josh the other day, and I think he was a bit surprised, but that’s the beauty of the story.”

During the course of the play, GG and BB have four warming “fireside chats” that punctuate Jordan’s stalled, unignited love life. “Barbara’s the heart of the play,” Glick readily allows. “We’re coming from very different places in our lives–both lonely and alienated—but we’re both taking care of each other in a very powerful way.

“Of all the actors I’ve ever worked with, there’s something so alive and present about her, and it makes you want to be a better actor. She inspires your work.”

Observations like that are common among the awestruck, twentysomething co-stars dancing around this matriarchic maypole. For every one of them, she is, variously, “a sparkplug” (Rebecca Naomi Jones), “a legend” (Lindsay Mendez), “the best” (John Behlmann) “a joy” (Luke Smith), even “an out-of-body experience” (Sas Goldberg).

It could be they have confused her for a contemporary since there’s a sprite-like lightness that still clings to her in her 85th year. She’s definitely on the same page.

“I’ve learned a lot from them,” she says. “They’re all so young, and the play deals with a generation I don’t know much about. When we did it at the Laura Pels, there wasn’t a moment of dissension or snideness. I’ve never been in a company like that.”

But she has been in Company—and she regularly regales the kids with backstage anecdotes about putting together that classic 1970 musical—how “Side by Side by Side” ran 18 minutes in Boston because of the corny-joke breaks between verses.

Then there was Company’s killer curtain-raiser (“Bobby! Bobby, baby! Bobby!”) that nobody could get right. “Stephen Sondheim said, ‘I don’t want to see it until you know it.’ We worked on it very hard, but it was just impossible. Elaine Stritch said at one point, ‘Wait till they try to do this shit in stock.’ I took it home, to my husband.”

Her late husband, Jay Harnic—Sheldon’s brother and the founder of Theaterworks USA—was “a sight singer. He could look at any piece of music, and he could sing it immediately. After we put the kids to bed, we worked on it about three and a half hours—I don’t read music, he taught it to me—and the next day, I was the only one who knew it. Hal Hastings, the music director, said, ‘You did homework with your husband last night.’ I said, ‘I did.’ Then, everyone caught up, and Steve heard it.”

Barrie was actually born a Berman, the same name as her Significant Other character: Barbara Ann Berman, in Chicago. When she was nine, her parents moved to Texas. The culture-clash of her Orthodox Jewish family assimilating to Texas life later became the basis for Lone Star, the first of her four autobiographical books.

She grew up in Corpus Christi, never knowing Terrence McNally or Farrah Fawcett, but she did know Sidney Sheinberg, the future president of Universal Studios who green-lighted Jaws. “I had lunch with him one day when I was on the lot doing a Hitchcock. I said, ‘How does it feel being a mogul?’ He said, ‘I’m scared all the time.’”

At the University of Texas, her classmates included Liz Smith, Tom Jones and Harvey Schmidt, Robert Benton, Elmore Rual Torn (a.k.a. Rip Torn) and, with a baby buggy outside the classroom, Jayne Mansfield. “The first time that I did Law and Order, I told Mariska Hargitay that I went to school with her mother, and she was thrilled.”

Her Texas roots not only got her on Broadway (The Wooden Dish was set there) but also into movies via an uncredited bit in Giant. Her two big scenes: the barbeque and the funeral. She went on salary before shooting started because Rock Hudson was tied up with another film, and then filming bogged down into overtime because of James Dean’s tardiness. “We waited so many days for him to arrive,” Barrie recalls. “He was always late. Finally, the director, George Stevens, stopped speaking to him. He said, ‘That’s it! From now on, I’m only speaking to you through an interpreter.’”

During the early days of live television, Barrie jumped in with both feet, which was the way one approached this new and dicey medium. One indelible memory was a Playhouse ’56 she did called Flight, written by Horton Foote and co-starring Kim Stanley. “Some people really do think Kim was the best American actress we’ve ever had,” Barrie underlines. “It was certainly scary to work with her because she was so brilliant. She’d say, ‘What if it doesn’t happen?’—meaning ‘What if I’m not in the moment. We’re live, on the air.’ She was always in the moment, always incredible.”

Barrie’s first credited screen performance (after tons of episodic TV) was in 1963’s The Caretakers. She was a catatonic patient at the mercy of a harsh head-nurse who was named Lucretia Terry and played by Joan Crawford. “The producers signed me into an asylum for five days so I could observe,” she says, “but all the patients knew I was a fake. ‘What are you doing here?’ You’re very sensitive when you’re a bit crazy.”

A year later came her breakthrough performances in one of the earliest of indies, One Potato, Two Potato. It won her Best Actress honors at the Cannes Film Festival. She and Bernie Hamilton were racially mixed marrieds, who basically go through what Ruth Negga and Joel Edgerton went through this year on the screen in Loving.

Edgerton’s understated (almost unstated) performance was Barrie’s first choice for the next Oscar, and she was dismayed he didn’t even make the nomination cut. “That was some performance, but it doesn’t look like he’s doing a lot. Actors, I’m sorry to say, tend to go toward the more obvious. I thought both actors were amazing.”

Barrie’s last Broadway performance almost was her last Broadway performance. Two Fiddlers ago, she started out as Yente but was replaced in previews by the younger and bouncier Nancy Opel, who, during a performance, fell through a faulty trap door, breaking her elbow and tearing her rotator cuff. To get this lucky, Barrie had to go through the “horrible” experience of being unceremoniously canned.

“First, they said I was too Jewish, then they said I wasn’t Jewish enough,” she remembers. “I just couldn’t please them. It wasn’t working, but I waited till they fired me. I didn’t quit because they had to pay me for a year, and I went to Fire Island and I had a very good time. But it was a very unhappy experience for me.”

There haven’t been a lot of those in the past 62 years, but there have been a few, starting with Square One: “I was fired from my first job in New York,” she says, going right there like it was a fresh memory. “I was just out of school, doing the Welsh play, The Corn Is Green, at Equity Library Theater. I was studying with Uta Hagen, and I was really working well, but they got nervous. They wanted results right away. We had a run-through, and I wasn’t there yet, so they fired me. I remember going home on the subway, crying on the platform. They were wrong, by the way. I was doing wonderful work and would have been terrific, but people who are nervous about their own success, don’t want to wait for you. They’re too anxious for results.

“Just look at Trip Cullman, who’s directing Significant Other. He’s so patient with all of us. He just lets it happen. You try things, you make mistakes, you see what works—that’s what you do in rehearsal. We took a big speech out of my last scene the other day. Trip thought it would be better, and it is. We just did a run-through.”

Barrie passed on the play when it was first offered because the Fire Island beach beckoned, but her kids—son Aaron and daughter Jane–called her, independently, and said, “You’ve got to do this play, Mom. It’s a wonderful play, and you’ll be wonderful in it.” “I will?” she asked. Yes, she will, and she was, and she is.

One of her shiny-penny young co-stars, Luke Smith, said it best: “Her list of credits speak for themselves, but what’s wonderful about Barbara Barrie is she’s still trying to learn. Every day is a learning opportunity. That’s a great lesson for a young actor.” 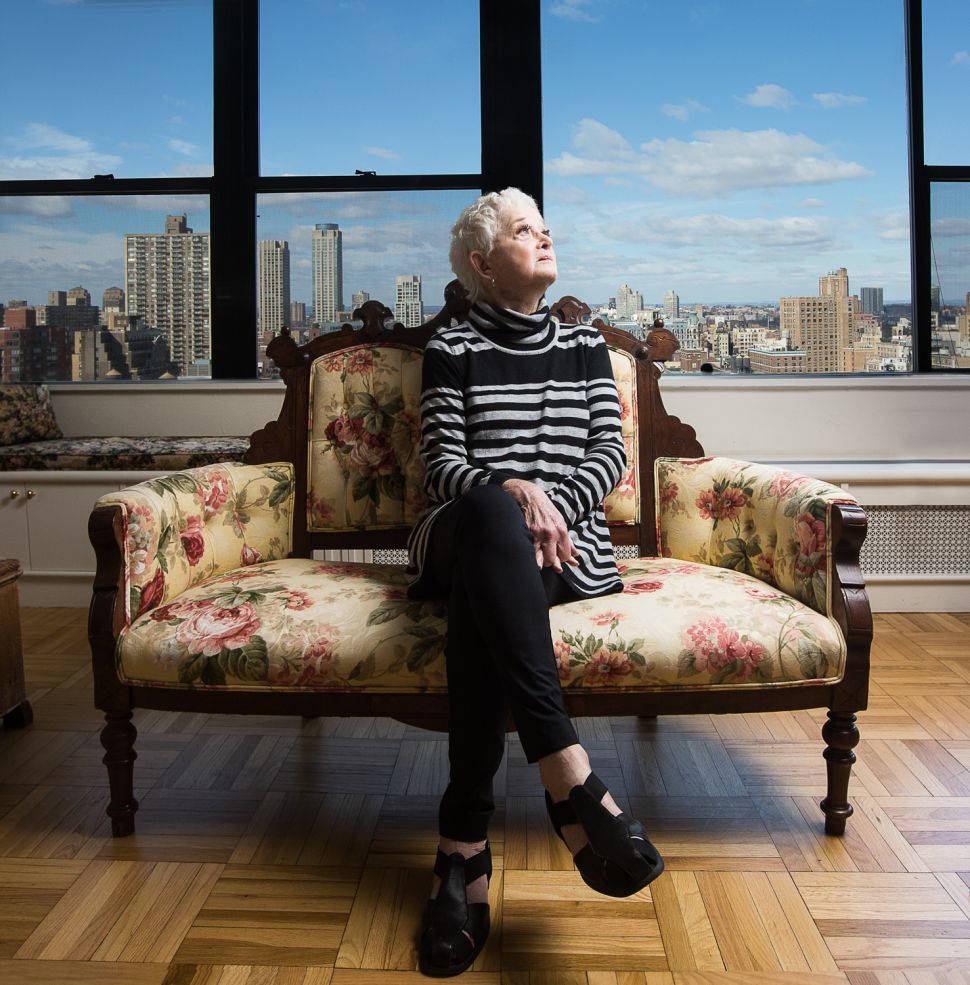