Should all Americans be given a guaranteed basic income, just enough money that any person could scrape by on their monthly check from the government? New York City’s Upper West Side gave the idea a very firm no vote last week.

“The universal basic income is supported across the political ideologies because it’s a fix—efficient and flexible and humane—and can end poverty once and for all,” former union chief Andy Stern said of the idea, but his case fell largely on deaf ears in the end.

Nevertheless, the idea of a universal basic income has been taking up a lot more cultural space lately. Elite startup accelerator Y Combinator has been cooking up an experiment to test how cash without conditions compared to prescriptive help (such as support specifically for housing, job training or child rearing). The non-profit GiveDirectly is testing the same question, but in the developing world, which Annie Lowrey took a close look at for The New York Times Magazine. Wired even ran a science fiction story about a world in which everyone had a guaranteed income, called “The Hunger After You’re Fed.”

In technology circles, increasingly sophisticated artificial intelligence will mean that there won’t be enough jobs out there for people. First they will come for truck drivers, but eventually they’ll take out writers, too. On the positive side, one could also argue that a basic income could open opportunities for entrepreneurship to strata of society too financially stressed to consider starting something today.

The concept has been stirring up conversation here in New York, as well. The aforementioned vote took place last week at a live taping of the latest debate at the Kaufman Center, organized by Intelligence Squared US.

For each debate, Intelligence Squared crafts a resolution of some kind and then brings in experts for and against it to participate in a structured debate, with opening and closing statements, cross-examination and moderated audience questions. The group gamifies the conversation by polling the audience before and after and giving the win to the side that moved the dial the most in their favor.

The debate opened with 35 percent of the audience for a basic income, 20 percent against and 45 percent undecided.

The pro-team argued that every person should be given $1,000 per month, paid for in part by ending a bunch of existing, more complicated programs. Stern referred to the payment as a “personal strike fund,” enough money to let almost any low-income worker walk off any job that turned exploitative. He debated alongside Charles Murray, the American Enterprise Institute scholar who got shouted down at an event in Middlebury recently (New Yorkers have been more subdued since).

Two Obama administration veterans took the side arguing that the status quo is doing pretty well, thank you very much (though more funding would be better, of course). Jared Bernstein, now of the Center for Budget and Policy Priorities and Jason Furman, now of the Peterson Institute, argued together against the motion.

They made a convincing case, apparently. The debate ended in a stunning upset: 31 percent in favor of a universal basic income (a four percent loss in support), 61 percent against (a 41 percent gain) and undecideds dropped down to eight percent.

“If you give somebody a dollar, that dollar has to come from somewhere,” Furman said in his opening remarks. As the previous top economic advisor to the prior president, he made a convincing case that after removing all the overhead from all the programs the affirmative would dismantle in their plan would only cover 15 percent of the cost of giving everyone a modest check every month.

Based on a casual read of the chatter in the crowd after the event, it seemed like this fiduciary question really sank the affirmative, mixed with a smattering of remaining uneasiness over the idea of just giving folks cash.

Where supporters of the basic income failed

On its face, the affirmative’s plan sounds rather crazy: give every citizen from 18 to 64 years old $1,000 every month, electronically deposited, guaranteed and no strings attached. So everyone from the cashier at McDonald’s to vampire squid royalty in the c-suite at Goldman Sachs, all of them would get a grand each month. On its face, it would cost something like half of the US Federal budget, but only on its face. This is the mistake the affirmative made.

Stern and Murray never explained that funds given to the wealthy would be clawed back with tax policy. If we can imagine a world in which such a dramatic policy shift as moving anti-poverty programs wholly into cash transfers took place, it isn’t such a stretch to imagine that income taxes could also get tweaked such that above a certain threshold people effectively get no benefit from the program.

Perhaps more importantly, though, there would also be thresholds where people who weren’t exactly poor but definitely not rich would also get some benefit. Correctly constructed, a basic income scheme can richly reward people for finding more lucrative work.

Milton Friedman used to advocate for a basic income scheme called the negative tax (a basic income whose benefit reduces as a person’s income increases, eventually disappearing). Stern hinted around the point, but never spelled it out in a way that the audience could put into one thought.

So here it is: though rich people would get that $1,000 monthly transfers, their tax bill would much more than offset it. They really get no benefit. That is, of course, unless they suddenly lost everything. And that happens.

Where critics of basic income failed

The opponents of cash failed to make a good case that that even with robust reform the present system does much good for people who work but struggle anyway, the working poor (and struggling lower middle class). Some people earn enough that they wouldn’t want to go on the dole, but not so much that any sort of financial shock wouldn’t be severe because they have nothing in savings.

When we talk about poverty in the US, we often mean people who fall at or near the federal poverty guidelines, which are uniform across the continental United States and shockingly low. A family of two is above the poverty line if they earn just $16,240 (whether they live in San Francisco or small town Arkansas). A family of five is only in poverty if it earns less that $28,780. This reporter struggled on that kind of income as a single guy living in Wisconsin.

Federal anti-poverty programs are always means tested, and while they often go above the poverty line, they don’t go wildly higher. The truth is that there are many parts of this country where a family earning $40 to $50,000 per year can still be quite vulnerable to economic shocks, like sudden medical or property bills, job loss or debilitation.

It’s hard to understate how powerful it can be to have more than one source of income. Even a modest $1,000 per month makes the prospect of sudden job loss much less terrifying for working people.

The most compelling moment of the night took place over just 45 seconds, starting here. At that moment, it seemed that the crowd understood that, whatever the negative might say, low-income people probably would be better off with a universal basic income over existing prescriptive programs, but that didn’t mean they were convinced it was feasible.

“I think you should never underestimate the power of a transformational idea,” Stern told the moderator before things really got going, but I don’t think he anticipated that transformation taking the shape of a crowd so overwhelmingly moving against his side.

At a key moment in the debate, his partner, Charles Murray, said, “Give them the damn money and let them decide how they want to live their lives.” Either government knows best what people need or the people themselves do.

Sometimes, for example, the best thing for a person might be to pick up stakes and move somewhere else. Maybe somewhere less expensive or somewhere with more jobs. There aren’t federal programs that facilitate relocation. In fact, relocating in the current system could easily mean starting over at square one with a completely new bureaucracy.

But the night’s opponents of the basic income represented well the prior president’s audacity to hope that mild tinkering at the edges of existing programs might maybe do something someday.

We have a feeling fear best characterized the crowd’s final disposition. Obama’s milquetoast progressive legacy may be all the progress that today’s American voting class really has the stomach for. We spoke to one woman afterward who kept bringing up alternatives to straight cash, such as education, job training, etc.

Naturally each of her alternatives might be good for some but not all people, and most could be attained by those it would most benefit with the extra disposable funds from a basic income. But the idea of giving something for nothing makes folks nervous. It is, however, efficient.

Or, as Stern put it, “Putting people’s choices in their own hands is the greatest dignity you can give someone.” 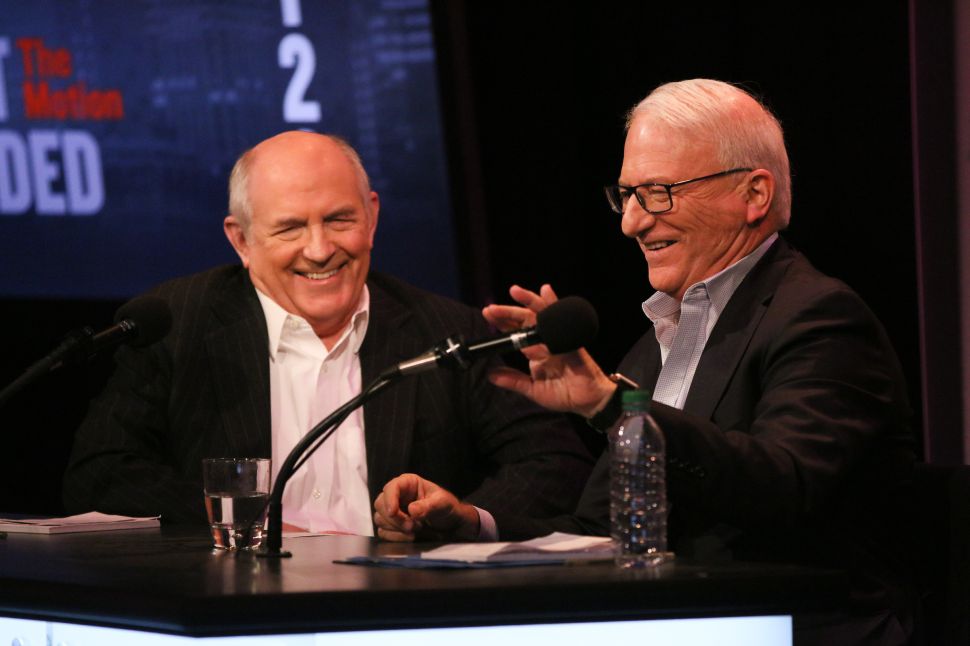