Figuring out the logistics of a successful Instagram post can be tough, so why not take inspiration from those most gifted in the art of social media? Below, see the best celebrity Instagrams from the past week, via visual intelligence platform Dash Hudson.

Justin Bieber is frolicking around Melbourne on the Australia leg of his Purpose tour. Bieber posed for the most-liked Instagram post of the week. It’s no yacht party, but he does look quite content amid the green leaves Down Under.

Speaking of the Biebs, his ex Selena Gomez continued her Instagram-official path with new boyfriend The Weeknd. Gomez shared a photo in which she’s wearing his black and red Champion x Supreme hoodie—he commented saying “sweater.” If that doesn’t say true romance, we don’t know what does.

Kim, Khloe and Kourtney Kardashian embarked on a girls’ trip to Palm Springs on Sunday, and of course the entire excursion was well documented. The trio drove a chic red vintage Chevrolet Bel Air convertible, and Kim took the opportunity to share a post of the sisters in front of their ride.

Because selfies run in the Kardashian-Jenner gene pool, Kendall Jenner got lots of love for her own black and white mirror snap, holding a vintage-y camera and wearing a black bikini. She posted it the day before the end of Paris Fashion Week, captioning “cool, now i need a vaca.” Same.

Lest their youngest sibling be forgotten, Kylie Jenner uploaded a solo bikini snap, posing on a foldout chair in a sea of grass and rocks, because scenery is everything.

In other fashion Instagrams, Rihanna celebrated the completion of her Fenty x Puma Fall 2017 show with a gorgeous shot on the balcony of her Paris hotel.

how I woke up feeling after my #FENTYxPUMA show last night! my. robe. is. betta. than. yours.

Relative Instagram newbie Emma Watson has been taking social media by storm as of late, as she deposits books around the city and dons fairy tale gowns for the Beauty and the Beast press tour. She’s also playing with lots of adorable white kittens.

Follow @the_press_tour for a peek behind-the-scenes of our @beautyandthebeast press tour. Plus surprise kittens! (Courtesy of @buzzfeed) 🐱💚🌹 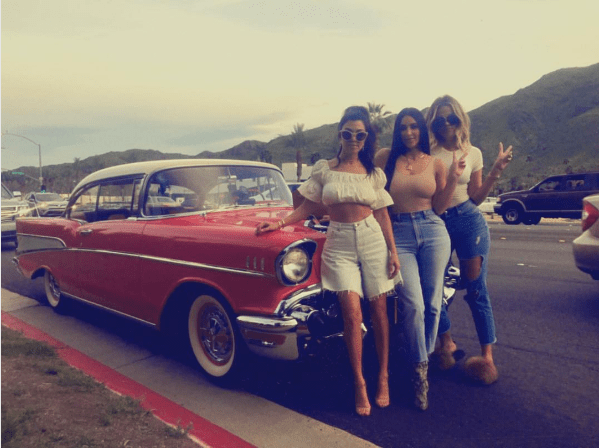