The main mysteries compelling the viewer through this miniseries right now are: who is going to murder whom? Did Ziggy choke Amabella? What really is the story with Jane’s rapist? The show puts a lot of effort into making you guess which of the conflicts between the characters has to do with any of these three big questions. The domestic violence of Celeste and Perry’s subplot is an easy call to make, and Madeline is always just unhinged enough to seem like she could maybe actually snap and kill someone– but what of “Avenue Q?” Harry the hippo? Elvis and Audrey?

Madeline meets up with Nathan and proposes that they and their spouses have dinner together to make peace regarding Abigail’s decision to live with Nathan and Bonnie. Of all the self-righteous characters on this show, Nathan is the most insufferable because he is the most self-righteous with the least to be self-righteous about. Unlike the other characters, he does not have a single redeeming value or sympathetic aspect or signifier of self-awareness, but he’s also not an abuser like Perry. He just sucks a lot. Madeline gets home later that night and Ed is in his Elvis costume singing karaoke. Chloe, whose main defining characteristic is her precocious taste in Big Chill soundtrack-adjacent music, wakes up and counsels him on song selection.

Perry and Celeste get into it about Celeste’s decision to use her law expertise in the kerfuffle regarding the school’s production of “Avenue Q.” He implies that practicing law could cause her to “go to pieces again,” which points to an important aspect, previously unacknowledged, of their relationship: Celeste must have had some kind of meltdown during her time as a high-powered lawyer, from which she might perceive Perry as having rescued her. It’s also worth speculating to what degree he might have engineered such a meltdown himself in order to secure control over her life.

Jane feels like her body is awakening after telling Madeline about the night Ziggy’s father assaulted her– it helped take the power away from him. Ed goes to talk to Bonnie about this dinner plan while she’s teaching yoga. Dashingly, he opens with, “I love sweat on women.” Last week I talked about how certain characters on this show enable their partners to be bigger shitheads, noting especially Ed’s tolerance of Madeline’s temper. But it occurred to me in this moment that it goes the other way for them, too– Ed’s status as Normal Person in the Relationship means he doesn’t ever have to work on trying not to sound like a serial killer.

Someone is still hurting Amabella. Madeline thinks she has a lead on Jane’s rapist: a guy named Saxon Baker, not Saxon Banks, who’s an interior designer, not an architect. The mayor stands firm against Avenue Q: “We can’t have puppets fuckin’ in Monterey.” But Celeste knocks the case out of the park, and both Madeline and Celeste acknowledge that they want more of that feeling out of life.

Jane meets with Ziggy’s teacher. When the teacher asks if there’s anything in Ziggy’s past that might have led to him strangling girls, Jane responds with a very guilty-sounding, “NO!” You and I know that the reason she’s holding something back is because it’s ridiculous– the idea that Ziggy might be secretly evil because it could be hereditary somehow. But to the teacher, it must just sound like she’s lying, and the teacher, in a community of Madelines and Renatas, and probably worse, at this point must be used to getting lied to about psychopathic behavior.

Madeline meets with the show’s director, who smooches on her and confesses his love to her. By Madeline’s account to Celeste, she reciprocates somewhat. Bonnie talks to Nathan about how he needs to chill. In the screener at least, they seem to be listening to the show’s theme song in this scene, which is weird.

Celeste has to practice just a little bit more law for Madeline and the school play, and Perry chokes her for it. A child psychologist tells Jane that Ziggy’s only problem is that he doesn’t know who his father is, that he’s worried it might be Darth Vader. (I love that Ziggy’s interpretation of Star Wars is that sometimes anybody’s dad can turn out to be Darth Vader. Which is true, in a way– it’s kind of what the whole show is about). A conversation between Madeline and the play director implies that the sudden and illicit smooching, or worse, has gone on sporadically for longer than she told Celeste. I wonder why she mentioned it for the first time now– maybe their conversation about wanting more out of life made it feel okay.

The marriage counselor asks Celeste why she’s afraid to communicate with Perry. Madeline and Celeste show Jane a picture of Saxon Banker, who looks like her assailant, but she can’t be sure. (This scene departs from a major twist in the book and I’m interested to see how that’s going to work out). Jane seems to consider going to Saxon Baker’s location, then goes to a gun range, then jogs some more, then sees herself running towards that cliff again.

Those top three mysteries I mentioned are still ambiguous by the end of this episode. This is another pretty slow one, in which very few things are revealed and even fewer characters realize anything about themselves, and I’m starting to think that you could add a scene of a beautiful woman looking intensely at the ocean as Motown music swells to anything and make it feel more dramatic than it is, but big things are coming soon. 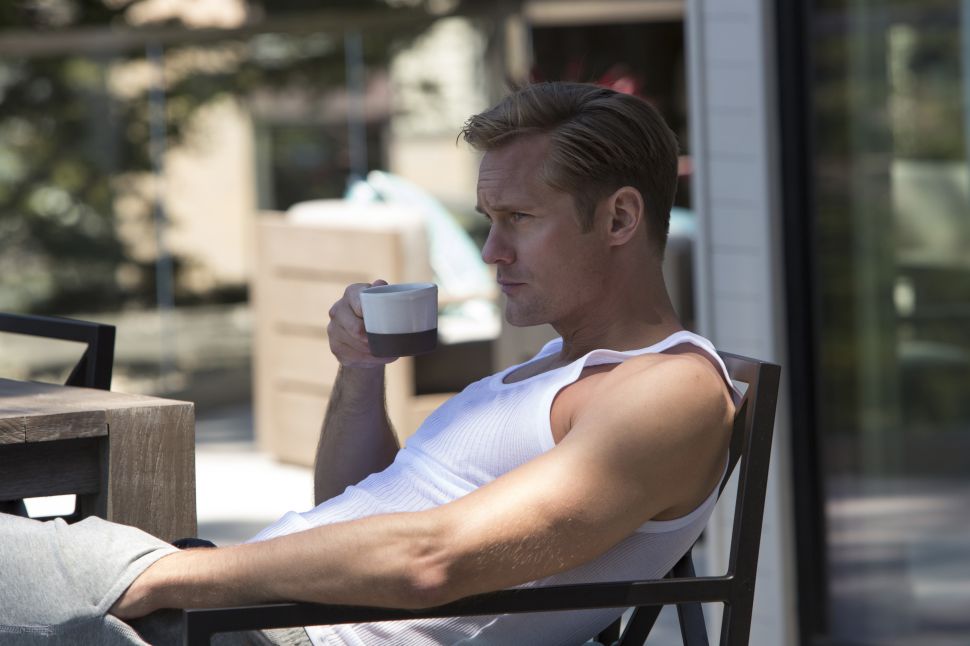