“Papa Was a Rolling Stone” opens this episode. We’re meant to understand that much of the background music is incidental and from Chloe’s iPod, because Chloe is a voice of reason, and the music is one of the few narratorial intrusions commenting, among other things, on how delusional these people are.

It turns out Jane dropped her purse, which had her gun in it, in front of Saxon Baker as she was menacingly sniffing him, so she has reason to fear that he called the cops on her. They end up just politely giving her a speeding ticket. Madeline asks if she took the gun on her trip and Jane tells her she didn’t. Doe-eyed, hoodie-enshrouded Jane turning into a stone cold potential killer is a great turn. (She later tells Madeline the truth).

Perry and Celeste briefly and calmly argue about his plans to miss Avenue Q for a work trip. He ends up canceling the trip for the family. This is one of the more nuanced portrayals of an abusive relationship I’ve ever seen, yet it’s never trying to take some contrarian gray area position or posit that any of this is okay– it’s just showing in a convincing way how a smart person who knows better can stay for way too long.

There is a petition– started by Renata’s Renfield, Harper– to get Ziggy suspended, still without evidence that he’s the one who bullies Amabella. Jane runs into Renata on her way from finding out and shoves her. Renata falls, cries out in dramatic anguish and clutches her eye.

At the therapist’s, Celeste reveals more insight into her relationship with Perry: the worse he attacks her, she finds, the more power she has over him subsequently. The therapist all but demands she make a plan to move out, which Celeste finds unprofessional. “I’ll get you the number for the Better Business Bureau,” the therapist says. This character is a godsend for Celeste, who won’t tell anyone else this stuff, and who has no one else in her life who will talk to her this way.

Jane apologizes to Renata– who now has an eye patch– for their altercation. Jane! What are you doing? These are litigious people! But they find common ground in the fact that both of their children are being attacked. Perry tries to get fresh with Celeste before the play, but she insists that they don’t have time to get it on. He paws at her relentlessly anyway. He whips his dick out, which excites Celeste for a moment, and when she relents again he pulls at her hard, and she hits him in the erect penis with a tennis racket. His urethra is broken in two places.

The Avenue Q chorus of “Everything in life is only for now” gets Madeline thinking about Joseph and their affair, and afterwards Joseph’s wife confronts Madeline. A discussion of Perry’s injury, which Ed and Madeline think was caused by just going at it too hard, leads to a fight over the fact that Ed never gets to injure his penis through sex with Madeline. Perry tells Celeste she’s lucky he didn’t murder her. She starts looking at apartments.

And then the next scene starts with something REALLY visceral and gross– Nathan practicing his Elvis moves! Nathan and Bonnie find out about Abigail’s secret project: she plans on selling her virginity online for Amnesty International to raise awareness of child sex trafficking. Nathan takes her laptop to try and shut down the site, which isn’t live yet. Abigail desperately tries to get it out of his hands, while Bonnie tries to separate them and get them to chill out and have a conversation. They wake up Skye, who starts crying. See this conflict as a political allegory: Abigail is an extremist whose actions are self-aggrandizing and will ultimately have little effect on the ills she’s trying to fight; Nathan is a brutish autocrat with little regard for diplomacy; Bonnie is an ineffectual liberal who values polite discourse over all and lacks conviction.

All of this leads, of course, to a terribly uncomfortable dinner, in which Nathan and Bonnie must figure out a smug way to break this terrible news to Ed and Madeline. Madeline vomits all over the table when she finds out. A low-key great moment in this scene occurs earlier: Madeline asks about the Sade they have playing and Ed interjects, curtly, that they have it already– insinuating that Madeline wouldn’t know because Sade is music for couples who fuck each other. I also love that Bonnie pronounces Mexico like “Mehico” and gets pissed at Madeline after Madeline hurls a third time.

Madeline approaches Abigail and, for some reason, takes the opportunity to confess about having cheated on Ed. “Fucking up doesn’t fix your life,” Madeline says, insightfully. This scene is fascinating because Madeline 100% makes it about her, and she engineers this big moment where she appears to impart learned wisdom but solves absolutely nothing. But then, what’s to be done?

The episode ends in another soulful, sweeping motion, the kind the show is making its trademark. This time involves a reprise of “Papa Was a Rolling Stone,” to which Ziggy is dancing. He sings along, and Jane gazes off thoughtfully as the lyrics hit her: “That was the day that my daddy died… Momma, I’m dependin’ on you.” Celeste, in the apartment she plans to rent, bows before the waves in the window like a Pagan worshipper.

Finale next week! Until then, please don’t murder me with a gun in a case of mistaken identity, and please do bid on my virginity, which I’m selling to raise awareness of recappers’ rights. 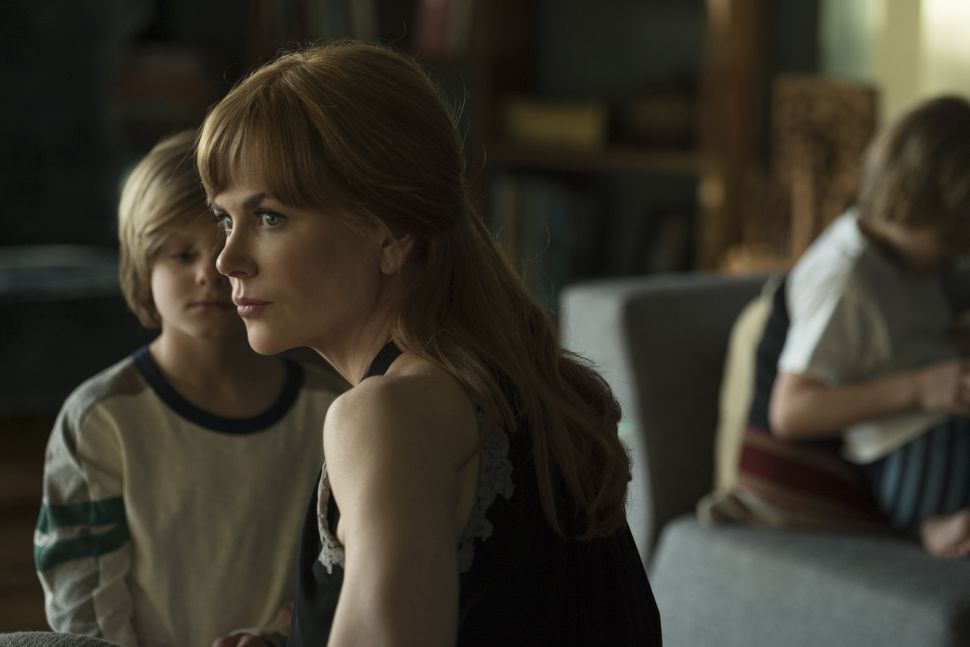