We open with Johnny Cash on the soundtrack, as Mike “Wags” Wagner, the most Billions character on Billions, pours his heart out to his liege lord Bobby Axelrod and getting screamed at in response. No, wait—a “48 HOURS EARLIER” chyron reveals that we’re opening, with Johnny Cash on the soundtrack, in South Korea, where some poor schmoe involved in the manufacture of some obviously faulty smartphone takes a header out his hotel window, cutting off the music and setting off a soft “thud” and the sounds of screeching cars and screaming pedestrians below. We cut to Mafee, one of Axe Captial’s mid-rung hedgebros, running headlong into Bobby’s office only to find him absent. We cut to where Bobby is: at a racetrack with his kid and Frenchy from Goodfellas, where he’s tring to get a line on the locale of an upstate New York casino that’s in the works until word about the smartphone debacle reaches him. And from there, it really is off to the races.

“Currency,” the fifth episode of Billions’ shockingly good second season, is as ruthlessly efficient a storytelling machine as its predecessors. There’s not a plot beat that doesn’t reveal character, and there’s not a character revelation that doesn’t advance the plot. Guest stars—from the aforementioned Mike “Frenchy” Starr, to Dennis Boutsikaris, Danny Strong, and Jerry O’Connell as recurring rival hedge fund gurus turned potential allies, to Ritchie Coster of True Detective Season Two doing a sort of Mayor Chessani redux as a gambling-industry hotshot, to Mad Men villain Allan “Lou Avery” Havey as the boss of Christopher Denham’s superlative rat-squad investigator Oliver Dake—shine. Leading players get some of their strongest moments, from Bobby ripping up Lara’s ambitions out of pique to Chuck admitting to Wendy that he’s always felt like she was out of his league—a confession she was utterly flummoxed to hear, which illustrates how strained their relationship really was. Jokes hit hard as well: cf. Bobby asking his hapless underling Mafee, who has a major tipoff but is afraid to divulge it, “Are you transmitting the details to me telepathically?”; Chuck asking his more competent subordinate Kate if she’s ever gone hunting and her replying “No—I’m black”; Chuck asking Go enthusiast Bryan Connerty if he takes a vow of celibacy to adhere to the game’s ancient roots and Bryan responding “No, that’s just the end result”; brash psychotherapist Dr. Gus barking at his boss Bobby to “Let me into that kitchen!”

All of this is in service to some of the tightest plotting on television. For Bobby, it’s all about leveraging a tipoff about potential Nigerian currency devaluation, which requires gauging and using the divided loyalties of his frienemies Lawrence Boyd, Todd Krakow, Ken Malverne, and Steven Birch. For Chuck, it’s about executing his plan to catch Boyd riding dirty, which all depends on his informant keeping his cool. The advances and reversals fly fast and furious, from a vengeful Birch stabbing Bobby in the back to the informant, McKinnon, shrewdly playing his anger over Boyd’s affair with his wife into feigned distress over the company’s illegal activity, which Boyd then discusses in detail on tape.

And what happens at the end of all this high-speed storytelling? Billions slams the breaks and backs up, as Wags makes good on the tease at the beginning of the episode and relates the story of his lost weekend—sorry, weekdays—to Axe. (“Oh. Well, that I do want to hear about,” Axe tells him, instantly ratcheting down from his place of rage to let Wags tell his tale, as if he’s a spokesperson for the audience.) The specifics of his two-day detox turn out to be worth the detour: the sight gag of Wendy walking in on him face down and ass up in his hotel room; the grim, genuinely sad story of how he bumped into his old mentor on the street only to discover the man has early onset Alzheimer’s and doesn’t even recognize him, losing his job and his family along with his memories. But most impressive of all is the simple fact of doing this—risking the loss of momentum and pulling off the payoff.

We even get a flashback in response to the flashback when Axe, quelling Wags’s fears of being superseded by his new chief of staff Steph Reid, mentions that he shitcanned Steph already that day. Yes, the same Steph who’d been seamlessly introduced into the Axe Cap world, and who earlier in the episode delivered a powerful speech to Bobby about how her role at the company was to keep him from crossing ethical lines even at the cost of a down quarter. “You’re human,” she told him; “You were wrong—I’m not human,” he said during the firing: “I am a machine. I’m the fucking Terminator.” Thus was Steph terminated. Beautifully done.

But wait, there’s more! The detour completed, Billions resumes its headlong rush to the finish. After tearing Lara and her business plan to absolute shreds almost on a whim on his way out the door to do a TV spot on the Nigerian currency plot with Lawrence Boyd, Bobby gets a call from his lawyer Orrin Bach that the feds are on their way to arrest Boyd. Bobby swallows the info hard and lets Larry carry his , tipping him off only after the segment is over and it’s too late for him to run. The asskicker is that both men understand and accept why it went down this way. Boyd even entrusts Axe with the vital tasks of informing his lawyer and his wife about the arrest.  This is supposed to be Chuck Rhoades’s hour of triumph, but Bobby managed to snatch victory from the jaws of (someone else’s) defeat.

Perhaps Chuck can sense it. When he tries to get a dig in on Axe, saying that Boyd’s arrest must look to him like his “future foretold,” Bobby shuts him right down: “You mean me watching you arrest other people while I walk right out the door? Yeah, it kind of does.” Axe leaves. Chuck stares into the camera. The next time we see him, Johnny Cash is playing yet again and he’s falling off his diet wagon. We’re full circle, baby, and another gobsmackingly entertaining Billions is in the books. 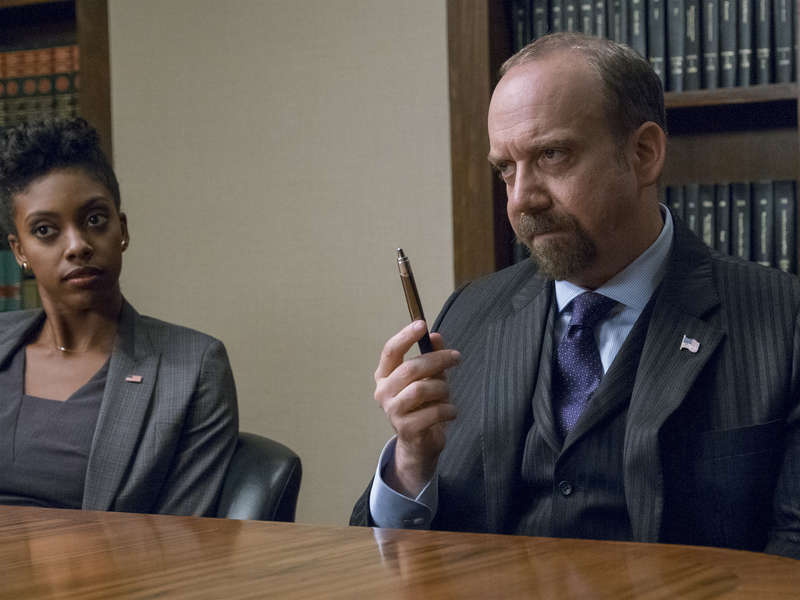