Chuck Rhoades and Bobby Axelrod win in this episode of Billions. Chuck Rhoades and Bobby Axelrod also lose in this episode of Billions. The art of the ep, titled “Indian Four,” lies in how writer Alice O’Neill and director Adam Arkin render the two states of being inextricably linked. Bobby pulls off a pair of difficult maneuvers—rehiring Wendy Rhoades and buying up valuable casino-adjacent land from a recalcitrant owner—only to have the latter blow up in his face. Chuck defeats numerous foes—his high-profile target Lawrence Boyd, his dogged ethics investigator Oliver Dake, the rash of lawsuits aimed at him by Axe, the angry attorney general—but realizes that his estrangement from his wife Wendy is out of his power to heal. It looks so easy for both of them, until it’s not.

For his part, Chuck snatches victory from the jaws of, well, victory over and over again. Having scored indisputable evidence of wrongdoing by banking-industry big shot Lawrence Boyd on tape thanks to an underling whose wife Boyd has been sleeping with, Rhoades dodges the dual bullets of “financial misconduct will bore juries to death” and “cuckoldry will make juries think this is all about revenge” by turning his right-hand man Bryan Connerty into a class warrior. After he coaches Bryan to redirect his fury from himself to their mutual quarry, Connerty unleashes a torrent of anti-one-percenter invective so effective that Boyd has no choice but to make a deal. Chuck promptly throws that deal back in Boyd’s face, insisting that his breach of the public trust deserves no less than a jury trial. Enter the Attorney General, Boyd’s old chum, who promises to call off the ethics investigation into Chuck’s office if he lets Boyd plead out. Boom, done—Chuck gets to mount one of the biggest noggins on Wall Street on his wall, and ruthless rat-squad investigator Oliver Dake gets pulled from the case just as he’s about to crack Chuck’s big-haired subordinate Lonnie wide open.

But Bobby Axelrod manages to poison the chalice after all. Sensing that Chuck is in worse trouble than he’s letting on, Wendy first goes to his lawyer and friend Ira, who despite his post-divorce affinity for what Patrick Bateman might refer to as “hardbodies” is actually a pretty decent guy. Ira confides that between the Dake’s investigation, Axe’s onslaught of lawsuits, and the divorce itself, Chuck’s living on the edge. So Wendy goes to Bobby with an offer: She’ll return to Axe Cap if he calls off the dogs. No sooner does he do so than she realizes this was his plan all along—the lawsuits were, among other things, leverage to bring her back into the fold. She adds the punitive measure that she’ll never see him as a client again, but she does still take the job.

Word of Axe’s ceasefire reaches Chuck’s ears when he’s celebrating his victory over Boyd with Ira and Chuck Sr.—another seemingly sketchy dude who’s actually trying to do right by his son. Immediately sensing that something’s up, he leave the collegial get-together to confront Wendy. Saving his bacon is all well and good, but if it comes at the cost of returning to the employ of his archnemesis, Chuck will walk away from the marriage completely before sleeping with the enemy, as it were. He strides off into the night, leaving Wendy at their doorstep.

But his opposite number gets well and truly screwed this week as well. Yes, Bobby wins Wendy back over to his company, even if he can’t see her himself. And yes, he’s able to patch things up with his wife Lara—who hijacks their private helicopter and rides home from a fancy dinner alone when she hears he’s re-hired the woman she considers a liability—by passing off Wendy’s no-contact stipulation as his idea, not hers. But the defeat of Boyd in a case that Bobby saw as a dry run for his own war against Rhoades comes as a nasty shock, particularly since he’d already contractually obligated himself to call off all his nuisance lawsuits as a condition of Wendy’s return. What’s worse, Chuck’s dad pulls some strings (via a mover and shaker played by David Strathairn) and has the lucrative upstate New York casino relocated from the town where Bobby’d spent millions snapping up real estate to some other locale, costing Axe not just the outlay of cash for the land but a sure thing for years to come.

Will he stay down for long? I doubt it. This is Billions, after all, and Bobby being brilliant is Billions’ thing. If you’re like me and didn’t see Axe’s full-court litigation press against Chuck as a Wendy recruitment scheme until the moment she herself did, then it stands to reason that the show could surprise us again with Bobby’s near-telepathic contingency planning. And isn’t it nice to have a show that can legitimately outsmart you—not just bury some easter-egg clues in a storyline and wait for you to find them, but convincingly construct characters whose intellect, talent, and emotional acumen keep them several steps ahead of your own? See also Chuck elsewhere in the episode, where he senses from the demeanor of Boyd’s lawyers alone that his star witness has been re-flipped against him; his refusal to take Boyd’s plea at first comes across as bluster, but once Chuck lays out the situation to Bryan it’s clear that he needs the threat of a jury trial to bring Boyd to heel.

Amid its leading men’s triumphs and pitfalls, Billions finds time for other memorable moments. I think Bobby’s blithe lie to Lara regarding the nature of his and Wendy’s new contract, for example, is the inverse of the “best moments” in couples therapy that Chuck describes to Ira—those little lightning flashes where, after a grueling conversation, their relationship feels free and easy again. Both sides of that particular mirror feel like they present an accurate image of how relationships work. But if you’re in this thing for the thrills, the continuing presence of Hall (that’s it, just “Hall”), Bobby’s fixer, ought to do you right; in this episode he convinces Lawrence Boyd that he’s willing to assault children to help his clients, and like Boyd, you may not necessarily believe him, but you don’t not believe him either. Like Billions at this point, he seems capable of anything. 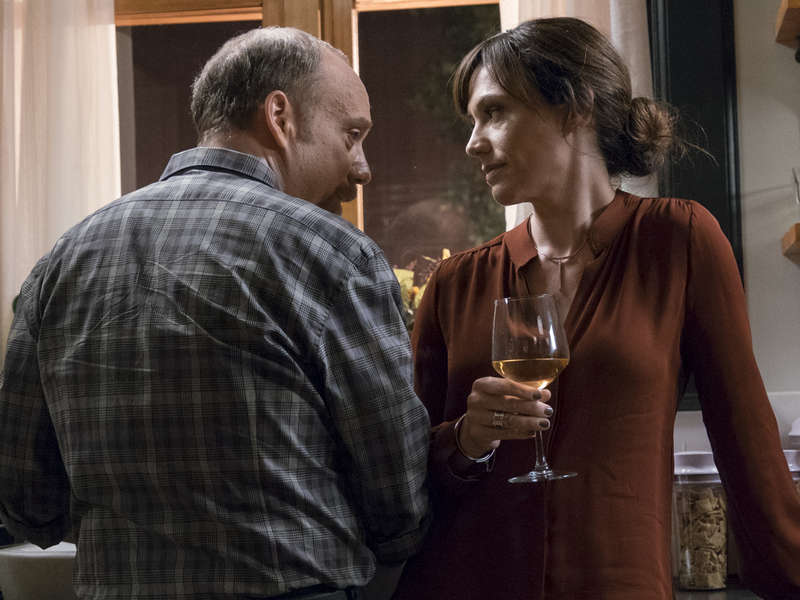