Each winter, we parents undergo a certain level of stress associated with our children’s winter birthdays. While May and June bring about playground or swim club invitations, those of us who spawned children between December and March must drum up an indoor celebration that won’t run thousands of dollars and still feels fun and fresh. My husband and I spend the bulk of our weekends celebrating other children at indoor play spaces, where we watch as our son rams into kids on trampolines, pushes toddlers off balance beams and goes berserk until cake time. We then trudge home needing naps, not knowing what day it is.

This year we weren’t having it. So, after a discussion about what our idea of fun would be—music, lights, maybe a live band, lots of friends and the chance to get on down—we sought out the perfect venue for us and our son to celebrate his fourth birthday.

In the end, we chose popular adult nightlife spot, Brooklyn Bowl. Yep, that Brooklyn Bowl. Only it wasn’t 11pm on a Saturday night, but 11am the next morning. Each Sunday, the Williamsburg bowling alley and music hall hosts Rock and Roll Playhouse, a jam session conceived by The Bowl founder Peter Shapiro and his son’s former educator Amy Striem. For two hours, the venue is swarming with children, parents and babies rocking out to Prince, The Allman Brothers and Fleetwood Mac. Mom and dad are grooving to the songs that played when they met, while their kids are dancing alongside them. It’s quite literally fun for all ages.

“We wanted to bring rock and roll to families with one simple goal: create programming where families can enjoy music together using educational cornerstones like literature or songwriting with kids,” said Ms. Striem. “Often our shows are a child’s first exposure to concerts in a safe and fun environment.”

At Rock and Roll Playhouse, parents can enjoy the full breadth of Brooklyn Bowl’s culinary offerings, like Blue Ribbon’s famous fried chicken along with draft beers, while their children get lost under a parachute during “Purple Rain.” It’s happy, festive, and the bands on stage (like the popular Music for Aardvarks) turn up the amps and operate lights to create a true concert-like experience. The highlight of our day was when the band called our son on stage to sing the Happy Birthday song. From down below, we saw a newfound gleam in his eye that made me wonder if he was going to stage dive.

Our son’s first taste of the concert life was a success, as was his birthday. Now only 350 days to figure out his next one. 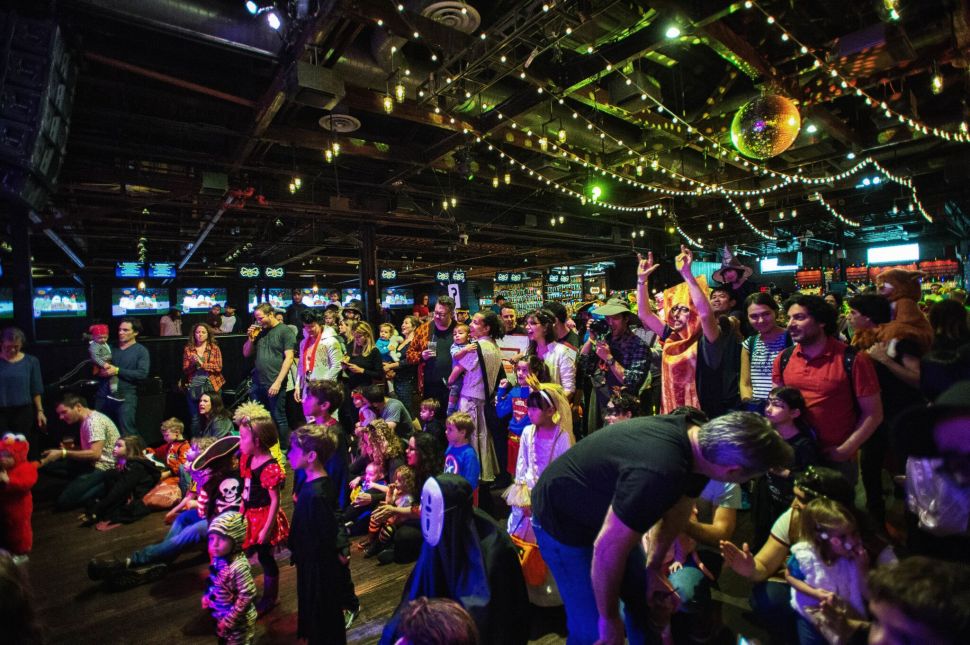