The president of Black Lives Matter of Greater New York called upon the African-American community to sign up for the organization’s self-defense classes after a white supremacist traveled from Maryland to New York City to murder a 66-year-old black man in Midtown Manhattan.

Army veteran James Harris Jackson was charged with second-degree murder as a hate crime after he stabbed Queens native Timothy Caughman to death with a sword on 36th Street and 9th Avenue on Monday, according to the New York Times. Jackson, who turned himself in Wednesday, said he traveled to the city to kill a black man because he felt the act would receive significant media coverage there.

At a protest last night, Hawk Newsome, president of the New York BLM chapter, said his organization will host free self-defense classes this summer and distribute literature in all five boroughs to inform people of “exactly what’s going on.”

“If you love black people, help spread that word. I don’t care about [President Donald] Trump, I care about my community, OK,” Newsome said, linking Caughman’s killing to the disappearances of minority girls in the nation’s capital. “I can’t fix Washington, D.C. but I can try my hardest to fix what’s happening here in New York. Now let’s talk about why we’re here. We’re talking about hate that’s winning right now. Hate is winning, and what I’m telling you is you have to defend yourself against this hate.”

He said that he is tired of people promoting “all the negativity in this world” being promoted as “good” and “comical.”

Indeed, he argued that blacks needed to prepare to respond to increasing proliferation and prominence of hate groups—”racial terrorists”—following the election.

“When Donald Trump won, there was a KKK rally to celebrate,” Newsome added. “These folks are coming together and if you don’t take anything away from this tonight, you have to put down your differences and come together to fight back. The oppressor is organized, okay, and he has his henchmen that go around and carrying out these heinous attacks. We have to come together and protect one another.”

Newsome and other BLM New York members marched to the spot where Caughman was murdered after the rally and march organized by Justice League NYC and Resist Here concluded at Herald Square. BLM members yelled, “Fuck the police!” as NYPD members escorting them looked on uncomfortably.

The rally, which started in Union Square, included speeches from Nelini Stamp, an organizer with the Working Families Party; Carmen Perez, Justice League NYC’s founder, and Palestinian-American activist Linda Sarsour, co-chairwoman of the Women’s March on Washington and Jason Walker, an HIV/AIDS organizer for VOCAL-NY.

Speakers complained of a lack of accountability in the NYPD and said that Trump further fostered an environment of hate. But they maintained that white supremacy has always been a part of the nation’s fabric—and that they have to come together and fight back against it.

“We have to address the systemic institutionalized racism that permeates through society from everyone to this man that got on the bus up here to the NYPD to the Daily News to this presidential administration,” Walker said. “They all are to blame for setting this tone. They killed not only a brother but a potential leader in my movement to end homelessness. I organize homeless folks living with not only with HIV but homeless folks who have been ignored by this society.”

The protesters refused to utter Jackson’s name. Stamp, who was teary-eyed and emotional, asked all the black attendees to utter the phrase, “I am somebody and I deserve full equality right here, right now!” in unison.

When the march kicked off, protesters sang, “Mama, mama, can’t you see? What they did to Timothy.” Protesters chanted, “If we don’t get it, shut it down!,” “We must love and protect each other!” and “It is our duty to fight for our freedom! It is our duty to win!”

At one point, a white man told them to “go back to your country” and organizers instructed marchers to ignore him. When stuck up his middle finger at the marchers, police officers escorting the marchers took him away and marchers shouted, “Black lives matter!” at him.

Brooklyn Councilman Robert Cornegy, co-chair of the BLAC, held a press conference at City Hall demanding a targeted response from the NYPD to the murder. 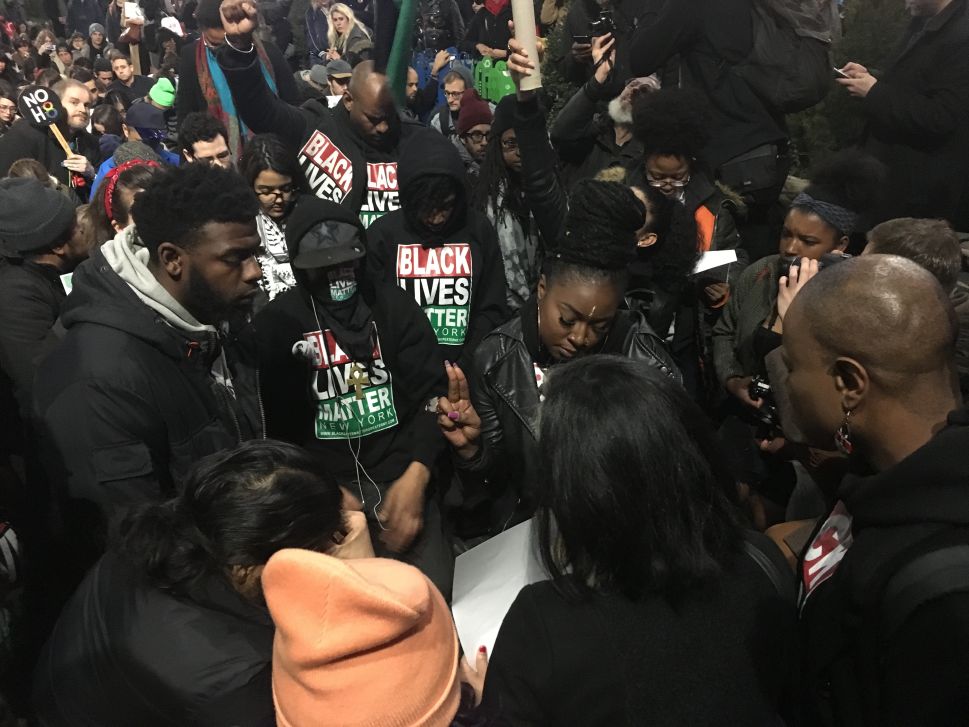