To hear it from Richard “Bo” Dietl, he’s the only candidate out there up to the formidable task of unseating Mayor Bill de Blasio—though it sounds like he didn’t want to be.

Sitting at his desk at his One Penn Plaza office, behind a collapsing barricade of books and folders and a coffee-mug bouquet of pens and scissors and markers (and, incongruously, an image of Saint Therese), the retired NYPD detective ranted to the Observer about everything wrong with the incumbent and the way he runs City Hall. But Dietl seemed to bear a special contempt for the layabout Democrats who refused to challenge their party’s standard-bearer in the September primary this year.

Then there’s Brooklyn Borough President Eric Adams, a fellow police department vet, who became one of the first elected officials to back de Blasio for re-election. Dietl claimed that he urged Adams to seek Gracie himself, only to be told “not yet, Bo”—and that when Dietl asked for the borough president’s support for his own bid, the pol worried de Blasio would “cut off all my funding and stuff.”

“Why should you have to live like that?” Dietl said. “This bothers me. I hate bullies and he’s a bully and I don’t like bullies.”

(“Mr. Dietl’s recollection of any endorsement talk is colorfully different than Borough President Adams’,” Adams spokesman Stefan Ringel told the Observer, admitting however that Dietl is an “old policing friend” whom the Democrat wishes “the best of luck.”)

Sporting a pink shirt with white cuffs and collar over his squat heavyset frame, along with a patterned tie, gold watch and a round red head, Dietl bore scant resemblance to Stephen Baldwin’s cool musclebound depiction of him in 1998’s One Tough Cop. Based on autobiography of the same name, the heavily fictionalized flick centered on perhaps the most prominent case of the detective’s decorated career: the 1981 mystery over the rape, murder and mutilation of an East Harlem nun.

Following his retirement in 1985, Dietl gained further fame as a guest on Don Imus’s radio show, as a high-profile private eye, as host of a short-lived crime program on MSNBC and as a pundit on Fox News. He lost the last gig after the ouster of his friend, Roger Ailes. who faced a sexual harassment scandal and who had reportedly retained Dietl’s services as an investigator.

The framed photos on the wall above the candidate’s desk showcase his political history: shots of him with former Presidents George W. Bush, Bill Clinton and the late Ronald Reagan. A “DIETL FOR CONGRESS” pin adorned the latter, a memento from his fruitless 1986 quest for a Queens House seat on the GOP ticket.

This year, after relocating from Long Island to the Upper East Side, Dietl had hoped to run for mayor as a Democrat. But when changing his voter registration, he checked off both the Democratic and Independence Party boxes, effectively voiding both and forcing him to run on his own line: “NYC Cares.”

He supported President Donald Trump last year, and Queens-born mogul’s endorsement appears on the webpage of Dietl’s security and investigations firm. But when he talked to the Observer last week, the candidate called the commander-in-chief “a narcissist” who needed to lay off Twitter and “stop with this Muslim ban thing.”

“I evolved because I feel as though I’m a moderate and a conservative, I’m fiscally conservative,” he said. “I like to know where the money’s going, I like to cut away fat, I’d like to be real efficient with the spending.”

Dietl’s critiques of the mayor were mostly familiar: his intimacy with deep-pocketed developers, his dicey now-defunct political nonprofit, his regular midday pilgrimages from Gracie Mansion to the Park Slope YMCA and his failure to address and redress a host of municipal issues.

“When de Blasio came on, it was a tale of two cities,” Dietl said. “It was supposed to be the rich and the poor but yet he is only interested in people giving him money.”

Manhattan District Attorney Cyrus Vance and Acting U.S. Attorney Joon Kim announced earlier this month they would not press charges against de Blasio over his political fundraising, although they highlighted a number of ways the mayor had apparently circumvented election law and delivered public favors for donors. Dietl claimed to know “a lot of real estate people” who gave to the Campaign for One New York and received favorable treatment from the administration—turning New York into “pay-to-play city.”

The candidate promised to impose an arbitrary cap on the amount of cash he would take from individuals and interests seeking public benefits.

“If I do any kind of fundraising, I can only accept, I can only accept $400 from people doing business with the city,” he said. “He’s accepting hundreds of thousands of dollars in the Campaign for One New York and that money, $4.3 million, he got to keep…it’s like robbing a bank for $4.3 million and then you get to keep the money.”

(Dietl recently escaped some hot himself: Nassau County prosecutors recently said they would not file any charges over a $24,000 report his firm did on the possibility of merging two local police departments—a report which appeared to have been plagiarized).

On the swelling homelessness crisis, Dietl accused de Blasio of simply putting a “band-aid on the problem” with his new plan to cut the shelter population. But when asked for a better answer, the candidate largely echoed the mayor’s own proposals: constructing more affordable housing, especially buildings with social services on site—though he added the improbable suggestion of hiring many of them to clean the city’s streets.

Dietl labeled the Administration for Children’s Services, which has seen several young children murdered on its watch, “a total abomination.” His solution? Increasing the beleaguered agency’s coordination with the NYPD, a reform de Blasio began implementing last year.

The ex-detective credited the city’s continued low crime rate to  former Police Commissioner Bill Bratton and the men and women of the NYPD, asserting that the mayor did not have the right to claim it as his achievement. Even if crime is down, he said, if homeless individuals are harassing and scaring people in the streets and subways, “that’s a crime in my heart, in my mind.”

More than anything, Dietl said that he’s “really upset and angry” that the mayor expects to be re-elected with relative ease, despite being what he described as a “lazy CEO.”

“He has to take a police escort to Brooklyn to walk on a treadmill for three steps then he comes all the way back,” the candidate said. “His day starts at 11, 12 o’clock.” 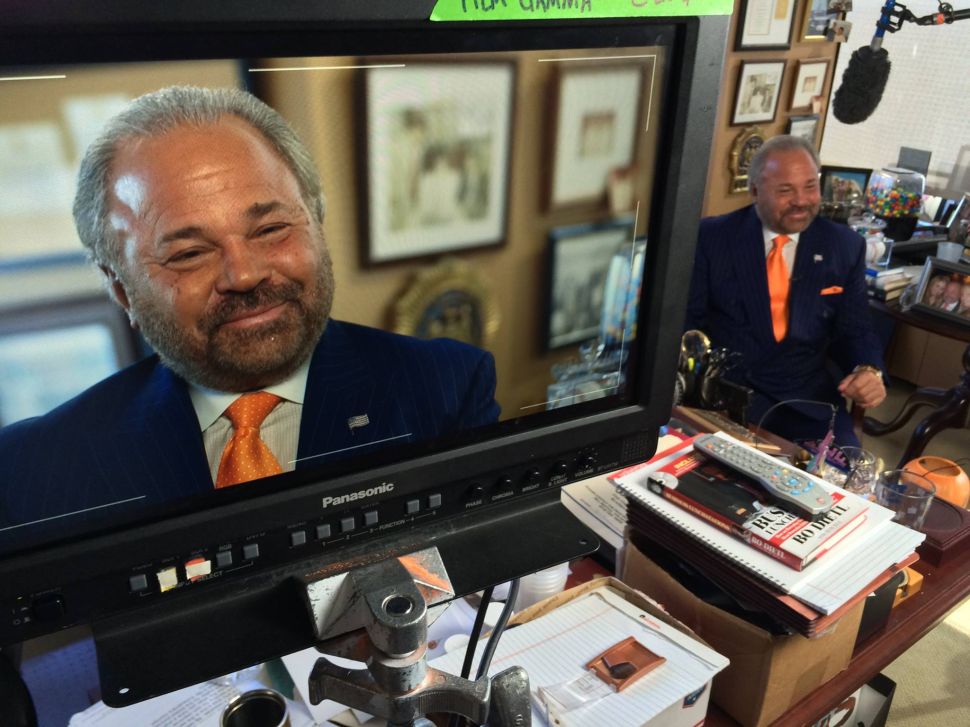