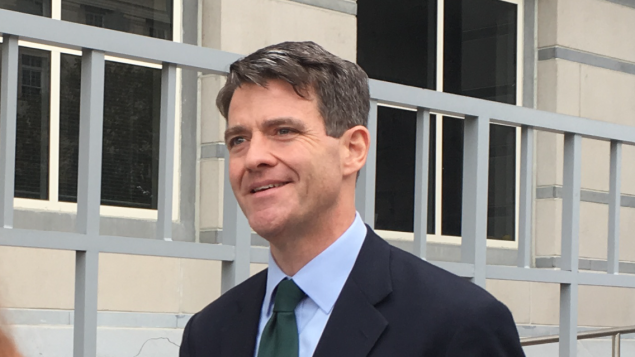 Baroni leaves the U.S. Federal District Court in Newark after his first day of testimony in 2016. Alyana Alfaro for Observer

NEWARK — Former Deputy Executive Director of the Port Authority Bill Baroni was sentenced Wednesday to 24 months in prison for his role in the September 2013 George Washington Bridge lane-closure scandal that came to be known as “Bridgegate.” In November 2016, Baroni and co-defendant Bridget Kelly were found guilty of misusing Port Authority resources and violating the civil rights of residents in the George Washington Bridge host community of Fort Lee, N.J.

The sentencing was handed down by Judge Susan Wigenton at the federal courthouse in Newark. Prior to the sentencing, the U.S. Attorney’s office recommended a 24 to 30-month sentence for Baroni. While the defendant was initially facing up to 37 to 46 months in prison, his attorneys asked the court for probation and community service rather than prison time.

Before his sentencing, Baroni spoke on his own behalf.

“I regret more than anything that I allowed myself to get caught up in this,” he said. “I made the wrong choice.”

During the sentencing hearing, Wigenton said that Baroni lied and perjured himself during the 2016 trial on multiple occasions. She also said Baroni knowingly lied during 2013 testimony to an Assembly panel. According to Wigenton, Baroni’s actions demonstrated “outrageous display of abuse of power.”

“This is a sad day for the state of New Jersey,” Wigenton said.

Fellow Bridgegate defendant Kelly—who worked as deputy chief of staff for New Jersey Governor Chris Christie during the time of the closures—also faces sentencing on Wednesday. While she, Baroni and self-avowed Bridgegate mastermind David Wildstein have all alleged that Christie was aware of the closures as they were happening, the governor was never charged in the case. Now, as his former allies face imprisonment, Christie was recently announced as head of a commission to fight opioid addiction in the administration of President Donald Trump.

Initial allegations in the case claimed that the closures were enacted as retribution against Fort Lee mayor Mark Sokolich for not endorsing Christie in his 2013 reelection campaign.

Following his prison term, Baroni will serve one year of probation and be required to complete 500 community service hours.