If you believe a post Bronx Assemblyman Mark Gjonaj placed on his Facebook page, more than 2,500 people shelled out $40 a piece to attend his Albanian Flag Day celebration on the Brooklyn waterfront late last year, an event that featured speeches from Mayor Bill de Blasio, Bronx Congressman Eliot Engel and Besiana Kadare, the Albanian ambassador to the United Nations.

The party commemorated the 104th anniversary of Albania’s declaration of independence from the Ottoman Empire, and its expensive preparation and production intertwined tightly with the family interests of Gjonaj himself, a Democrat who has emerged as the first elected official and foremost political powerbroker from the Bronx’s burgeoning Albanian-American community. The Flag Day fete was made possible through a nonprofit group the assemblyman founded, through the work of his government office staff, through funding from his campaign account and through a popular restaurant his family owns and operates.

Those efforts reaped tens of thousands of dollars. But for who?

State Board of Elections records indicate Gjonaj made arrangements for the November 26, 2016 event with a $1,900 injection of his campaign funds into the Albanian-American Community Association. Newspaper reports dating back as far as eight years identify Gjonaj as the association’s co-founder, and the campaign filing and tax records list its address as 970 Morris Park Avenue in the Bronx.

That address belongs M.P. Realty Group, the company founded by Gjonaj’s Albanian immigrant parents, and which the assemblyman and his brother Paul Gjonaj manage today.

The Albanian-American Community Association is registered with the Internal Revenue Service as a tax-exempt public charity. But the organization is not certified by the New York State Charities Bureau, meaning it is ineligible to engage in fundraising anywhere in the Empire State.

A source in state Attorney General Eric Schneiderman’s office revealed to the Observer that the prosecutor’s team has written to the group requesting that it submit the necessary paperwork to obtain certification, but has yet to receive any of the necessary documents from it.

Advertisements for the Flag Day celebration ran in local media, prominently featuring the assemblyman’s name and that of the Albanian-American Community Association, as well as those of a handful of other co-sponsors.

“Dinner Tickets $40.00 will include sitdown dinner buffet, drinks, entertainment and more,” the ads read, urging those interested to email AssemblymanGjonajEvents@gmail.com.

Through a Freedom of Information Law request, the Observer obtained the caterer’s permit for the event, which the State Liquor Authority issued to Jemi LLC—an entity that does business as Don Coqui on the in the City Island section of the Bronx.

Jemi LLC/Don Coqui on the is owned and operated by Paul Gjonaj, though the assemblyman’s name appears on building permits granted to the restaurant as recently as 2013, his first year in elected office. As the Observer previously uncovered, the assemblyman ladled out some $72,000 from his campaign account to the eatery over the last several months, payment for a series of events held there.

Paul Gjonaj has lent his brother’s campaign $150,000 over the past four years, which the assemblyman has repaid as of his most recent filing. The realtor and restauranteur has also directly contributed several thousand dollars to his brother’s political ambitions, as has M.P. Realty and an affiliated limited liability corporation, Kramluap Realty (apparently the pair’s names spelled backwards).

“It was a pleasure speaking with you earlier. As discussed, I wanted to check on the status of a permit application submitted on 11/10/16,” Nathalia Fernandez wrote to a public affairs officer at the SLA on November 14, 2016, noting the event was just 12 days away. “At your earliest convenience, please let me know the status of the application and if we can expect the permit to be granted.”

Fernandez’s email signature clearly identified her as Gjonaj’s chief of staff. She sent a second email from the same account a day later after receiving no answer.

“I hope this email finds you well. I just wanted to quickly follow up with our conversation form [sic] yesterday regarding our permit application,” she wrote. “I look forward to hearing back from you.”

At no point in these missives did Fernandez disclose that she was using her state email to inquire on behalf of an establishment belonging to the assemblyman’s brother. Nor did she reveal that neither Don Coqui on the nor Liberty View Plaza, where the party took place, are located in the assemblyman’s district, and thus she was not lobbying in the interest of a constituent.

According to her LinkedIn page, Fernandez left her position with Gjonaj earlier this month to become Gov. Andrew Cuomo’s Bronx regional representative. The State Liquor Authority responded to her second message, confirming the permit’s approval.

Legal experts the Observer consulted remarked that state law aims mainly aims to prevent candidates from receiving unfair discounts from private interests, and does little to stop them from funneling money to a favored vendor. Good government advocates, however, said multiple aspects of the event’s arrangement raise serious ethics concerns.

“It’s ‘all in the family’ so to speak, and when an event like this takes place, and it is done entirely within a family it does present opportunities for conflicts and possibly unethical behavior,” said Dick Dadey, executive director of Citizens Union.

Susan Lerner, executive director of Common Cause, went further—describing the continued use of the assemblyman’s real estate business as headquarters for the Albanian-American Community Association as “not good practice.”

“The fact pattern leads to a conclusion that he’s using his position to advance his personal and his family’s financial interests. And that’s not acceptable,” the ethics advocate told the Observer. “A legislative office trying to exert influence over an agency to get a permit for a family member is really not the way a public office is supposed to be used.”

“I think the question is: where did the money go and who is it benefiting?” she continued.

The Advance Group, which represents the assemblyman, told the Observer the party raked in $95,980 in ticket sales and cost a total of $140,000 to put on. Despite these figures, the Gjonaj team maintained that Jemi LLC “saw no profit” from the event and received no payment other than $165 for insurance—and “was listed as the caterer because of their existing liquor license,” which made the restaurant eligible for the special permit.

The Advance Group further asserted that the Albanian-American Community Association retained a second vendor which provided all food, alcohol and labor for the evening and which received all compensation for those goods and services. Yet the consultant was unable to provide the name of this company, nor any receipts to verify the claim.

Moreover, State Liquor Authority regulations on caterers’ permits explicitly state “applicant must be hired to furnish provisions (food) and alcoholic beverages at the event” and “food must be provided by applicant/licensee.” The authority’s Handbook for Retail Licensees makes this point as well.

“As a retail on-premises licensee, you may obtain permits to cater events that take place at other locations. To obtain a caterer’s permit, you must be serving the food and beverages for the events,” the guide reads.

In a lengthy statement sent to the Observer, the assemblyman seemed to dispute the numerous news reports identifying him as the co-founder of the Albanian-American Community Association.

“My relationship with the AACA has been as a volunteer, a supporter, and as an ally from the very beginning,” Gjonaj said. “I provided assistance for their filings with the IRS and the New York Department of State, served as a contact person, and, because the AACA is a volunteer organization without an office of their own, allowed the office of M.P. Realty to be used as a mailing address.”

The pol also asserted that Fernandez, his former chief of staff, “acted in a routine and appropriate fashion.”

“Staff members for NYS legislators often assist in the coordination of community events and this was no different,” he said. “Any effort to frame Ms. Fernandez’s work as inappropriate is completely off-base. Ms. Fernandez is among the most ethical and hardest working people I know and any intimation otherwise is despicable.”

Gjonaj is presently the frontrunner in the race to fill the soon-to-be-vacant seat of term-limited Bronx Councilman James Vacca. The district heavily overlaps with his current turf, and includes City Island, where Jemi LLC/Don Coqui on the is located.

He faces opposition in the September primary from local Democratic district leader Marjorie Velazquez, City Island activist John Doyle, housing nonprofit director Alex Gomez and former community board chairman John Marano. If successful, the assemblyman will see an almost $70,000 bump from the $79,500 he earns as a state lawmaker, thanks to the raise the Council voted to give itself last year.

“I am proud to have been a supporter of last year’s 104th Albanian Independence Day celebration, just as I have been in the past and plan to in the future,” the assemblyman told the Observer. “The only other thing I care to say about the matter is that I hope you and your family will attend next year when I’m sure we’ll have an even bigger and better event.” 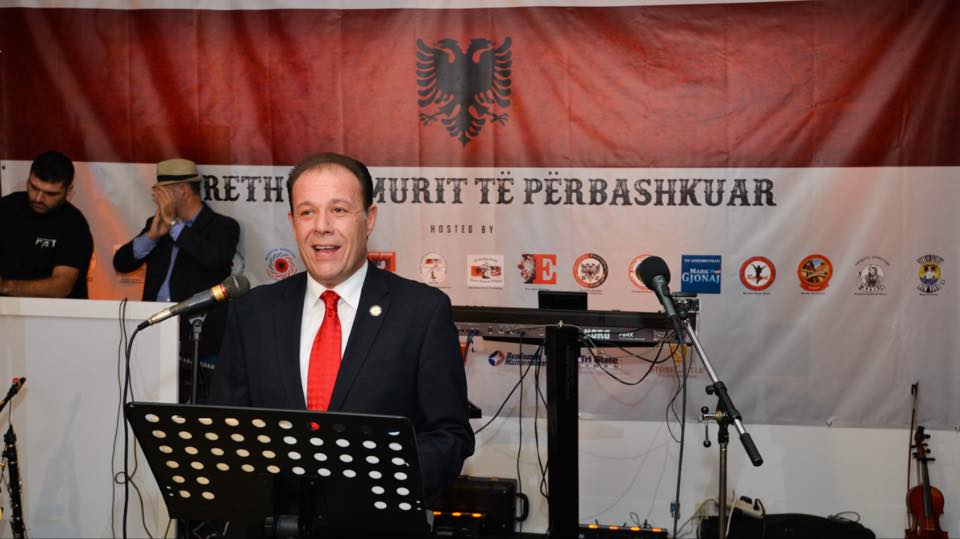