Cobie Smulders wants to know where she can rent an RV.

The actress, best known for her work on How I Met Your Mother, is currently making her Broadway debut in a revival of Noel Coward’s Present Laughter. But on a recent Monday morning the statuesque brunette was looking ahead to July, when her run ends and she, her husband (Saturday Night Live alum Taran Killam, who’s currently starring in Hamilton) and their two children (ages 2 and 7) head back to California.

Smulders wants to make the cross-country journey in a trailer, but she’s at a loss for where to begin—until one of her stylists recommends a dealership in Weehawken, New Jersey, at which point Smulders says she’ll “get on that.”

The 34-year-old is no stranger to long road trips. Early in her acting career, she made an annual pilgrimage from her home in Vancouver to Los Angeles to try her luck during TV pilot season (which runs from November to March). She and her Canuck cohorts referred to the trip as the “Canadian migration.”

“We’d work in restaurants all year long to make money, and then blow it for three months in L.A. while we were trying to get jobs,” Smulders told the Observer during an interview at the Musket Room, a barn stable turned high-end restaurant in lower Manhattan.

Smulders participated in theater clubs throughout elementary and high school, and she also briefly moved to New York to pursue her craft—that’s where she saw Rent and first dreamed of being on Broadway.

But it was those trips to L.A. that bore the most fruit. Indeed, during Smulders’ third pilot season she landed her breakout role as TV reporter Robin Scherbatsky on How I Met Your Mother. The CBS sitcom debuted in 2005 and ran for nine seasons.

“It was one of those magical things that just kept going,” Smulders said.

Among the most magical parts of it (at least for Smulders) was that her character had a pop star alter ego named Robin Sparkles, whose hits included “Let’s Go to the Mall.”

“One of the major complaints for long-running shows is that they become mundane,” Smulders said. “I never felt that way because of stuff like Robin Sparkles.”

Outside this fantasy world, Robin was the on-again, off-again love interest of both Barney Stinson (Neil Patrick Harris) and Ted Mosby (Josh Radnor). Indeed, in the series finale, after the titular mother dies, Ted’s kids convince him to give his relationship with Robin another shot (she and Barney have married and divorced by this point).

Many fans were disappointed in the way the series wrapped up, and while Smulders disagrees she’s glad that people had strong opinions about it.

“People were really emotionally invested in this show,” she said. “I thought it was a beautiful way to end the time we spent together.”

Smulders’ fan base expanded from comedy fans to comic book fanboys when she was cast as badass S.H.I.E.L.D. agent (and Samuel L. Jackson sidekick) Maria Hill in the Avengers franchise. She met Joss Whedon (director of the first two films) through her Mother co-star Alyson Hannigan.

“The humans aren’t as interesting to watch in a battle, but Joss is kind and makes sure every actor has a moment,” said Smulders, who will appear in next summer’s Avengers: Infinity War.

She also made waves earlier this year after a mysterious cameo on the Netflix show Lemony Snicket’s A Series of Unfortunate Events—the series cut away from the main action several times to show Smulders and Will Arnett handcuffed in the back of a van and exploring Peru, among other adventures. The couple’s entire storyline turned out to be a red herring.

“My character didn’t die, so I have no idea what they’re gonna do next season,” she said.

As such, Smulders is refocusing on comedy while she stars in Present Laughter, which opens April 5 at the St. James Theatre. And it’s clear her comedic instincts are still strong from her sitcom days—at one point during the photo shoot for this article, she started nibbling on a chili pepper that was sitting on the bar, a sight to make even the most hardened cynic chuckle.

While this is Smulders’ first time on Broadway, she’s been a fan of Coward since the beginning of her career—she performed scenes from his classic Private Lives in acting classes.

“I love the way he uses comedy as a weapon,” Smulders said.

The main sharpshooter in Present Laughter is Garry Essendine (played by Oscar and Tony winner Kevin Kline), a celebrated, self-absorbed actor with a voracious libido who’s going through a midlife crisis. Throughout the play he negotiates comic conflicts with his wife, producer, director, secretary and servants, among others.

Smulders plays Joanna Lyppiatt, who’s married to Garry’s producer but is also infatuated with Garry himself.

Playing the game with a formidable opponent like Kline keeps Smulders on her toes—she described him as an “idiot savant” who takes comedy seriously.

“He keeps changing and keeping things interesting,” she said. “He’s like : so fluid, going from one thing to the next. He’s a true artist.”

The same traits apply to Smulders herself, according to Present Laughter director Moritz von Stuelpnagel (a Tony nominee for helming Hand to God).

“Cobie was built for the theater,” he said in an email. “She’s thoughtful about storytelling and precise in her comedy. It’s been a real joy to watch her take a character that might otherwise descend into a flat archetype and have her flesh the role out with dynamic humanity.”

While Coward’s fast-paced writing style is similar to the patter on sitcoms like How I Met Your Mother, Smulders said sustaining that rhythm for almost three hours presented a new challenge.

“Being in a 15 minute scene is unlike anything you have to do on film or TV,” she said.

The Broadway grind of rehearsals and performances has also had an impact on Smulders’ home life, especially since her spouse is in the same boat—Killam is playing King George III in Hamilton through April 13.

“Obviously there’s a little bit of a ‘Who’s getting up first to take care of the kids’ type of situation,” Smulders said. “But aside from the lack of sleep, it’s wonderful. We’re together in ways that we haven’t been before.”

She and Killam meet for dinner together on two show days. Smulders admitted she takes advantage of the fact that her future RV partner is in Broadway’s biggest hit.

“I’m so happy that he’s a part of it, and by association I feel like I’m a part of it, but maybe that’s just me being greedy,” she said.

Greed aside, Smulders said that her time in New York had been “a dream” thus far.

“I keep fooling people into giving me jobs, and now I’m on Broadway,” she said. “It’s always something I’ve wanted to be a part of, and I can’t believe that this is the experience I’m having.” 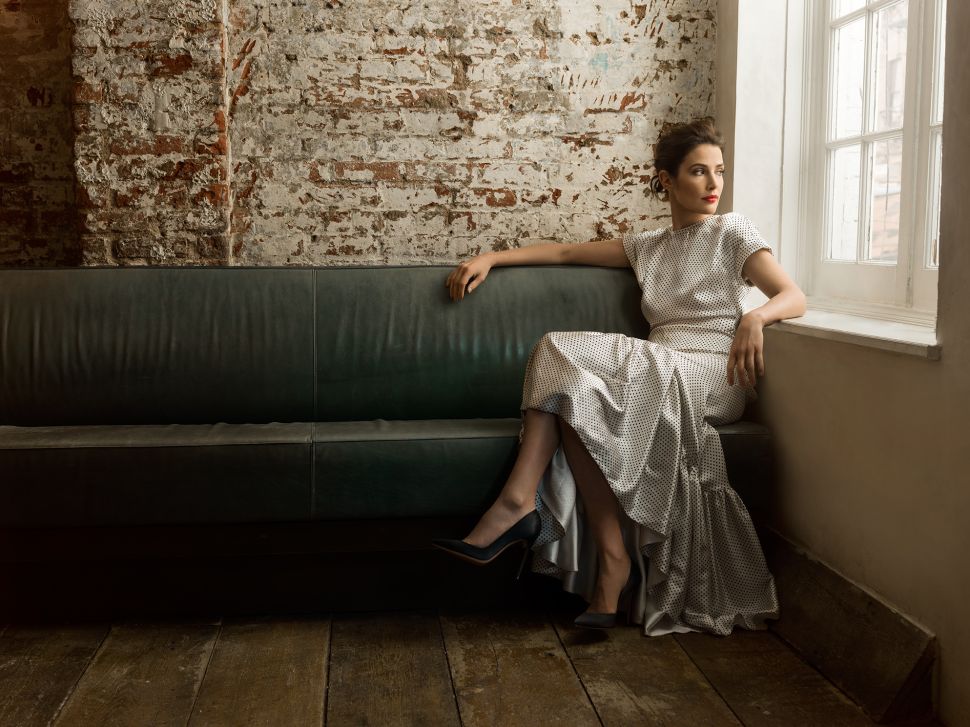