When someone asks you where you were the morning of Sept. 11, 2001, not only do you know precisely where you were, you also know what you were doing and how you somehow made it through the rest of the day. It’s one of those indelible dates.

Jenn Colella was in her final year of grad school in California and found herself walking around L.A. numbly in all that surreal sunshine. “It was interesting seeing people on the sidewalk, wanting to be outside, wanting to be near each other,” she remembers. “Los Angeles is very mobile as far as cars are concerned, but people wanted to be out. There were a lot of vigils that I would just walk into and stand and kinda sing and light candles. I found it all to be really moving. Across the country, people were holding space and holding love for those friends we had in New York.”

Chad Kimball was on the other coast—in Astoria, rehearsing to be the vacation replacement for Gavin Creel in Batboy (which was subsequently canceled after 9/11 so he never went on). That tragic morning, he went to the roof of his Queens tenement and saw smoke billowing across the from the toppled Twin Towers.

“I had this big American flag I bought in college at the Salvation Army,” he recalls. “I put it on a mop pole and took it to the West Side highway and waved it. I needed to show some kind of support, but there was nothing you could really do at that point.”

These days Colella and Kimball star in Come From Away, a new musical that is set on that fateful day but (by FAA decree) occurs 1096.4 miles from the devastated World Trade Center—in the small Canadian hamlet of Gander, Newfoundland. This is where 38 planes, then airborne, were rerouted after U.S. airspace was closed down for fear of further attacks. For more than a full day, 6,579 passengers were forced to stay on the tarmac, oblivious to the terrible new world waiting outside their planes.

When they did finally emerge—scared, confused and profoundly ruffled–they were astonished to find table after table of sandwiches, cakes and good eats laid out for them at the airport. The good folk of Gander had stayed up all night preparing it all.

The town’s generosity didn’t stop there. For the next four days, until the flights were resumed, locals opened up their homes and hearts to these stranded strangers. (In Newfoundland, if you’re not a resident, they say you’ve “come from away,” and this outpouring, which doubled the town’s population, came from all parts of the world.)

Interestingly (perhaps), this is not the first time that Gander has hosted passengers from a troubled airplane. In the 1951 film, No Highway in the Sky, it was the last merciful stop for a doomed airliner that had Marlene Dietrich for its glamorous cargo and James Stewart as a fuddy-duddy aviation expert who, investigating a crash site, determined that the tailplane of a new kind of aircraft would snap off after 1,440 hours of flying time. When he discovered he was actually on a plane that had already logged up 1,420 hours, he made sure it never left the ground of Gander.

Come From Away, which arrives March 12 at the Schoenfeld, is the first Broadway musical to come from Canada since the 2006 Tony winner, The Drowsy Chaperone.

The book, music and lyrics are the work of a Toronto husband-and-wife team, David Hein and Irene Sankoff, based on three weeks of interviews they did with “plane people” and townspeople alike on the 10th anniversary of the event that they depict.

The first person to detect a heart-swelling musical in this humane and harmonious interplay of strangers was also a Canadian, Michael Rubinoff. He got a number of no’s when he pitched his notion to songwriters, but, when he happened upon Hein and Sankoff’s debut musical, an autobiographical antic called My Mother’s Lesbian Jewish Wiccan Wedding, he found people it made perfect sense to. Plus, it permitted Hein a chance to dip back into Newfoundland’s unique blend of Celtic-flavored folk-rock that he grew up on. In bringing his idea to fruition, Rubinoff transitioned from lawyer to Associate Dean of Visual and Performing Arts at Sheridan College in Oakville, Ontario. It was there that students workshopped the show into existence.

In 2014, Come From Away got its first full professional mounting at the La Jolla Playhouse, directed then (and now) by the playhouse’s Artistic Director, Christopher Ashley, who honed it on the road via stops in Seattle, Washington D.C. and Toronto.

Colella plays Captain Beverly Bass, who was piloting Flight 49, a 777 going from Paris to Dallas/Fort Worth, and Kimball is one of the passengers on board, half of a flip and fractious gay couple (both named Kevin). But, like the rest of the cast of 12, they do multiple roles, working both sides of the great divide: Visitors and Homeys.

“Every time we’re on a new bus, it’s technically a new character, so we all play up to 10 or 12 characters,” says Colella, who has a lighter sentence than most—only four, including the town librarian, Annette—and makes the show’s most vivid impact as the airlines pilot who mother-hens her passengers on this strange and alien turf.

It helped that the real Captain Bass stepped up when the show was coming together and has stayed with it every stop of the way. “She has been very present,” Colella declares. “When we were in Seattle, she brought about 50 female pilots to see the show—and 90 more when we were in Washington. We met in La Jolla and have become dear friends in the interim. Just spending time with her, sharing moments with her, has been inspiring for me. It’s really thrilling—empowering—to play her.”

Colella’s role grew and deepened, the more Bass opened up to the authors, with the result that the character has the big solo spot in the show, based almost word for word on the transcripts of her interviews. Since the age of seven, she wanted to be a pilot and subsequently became the first female captain ever for American Airlines. Now retired, she has a 22-year-old daughter who is a pilot flying private jets.

“Dave and Irene didn’t leave any stone unturned in researching this piece,” Kimball declares. “They did about 500 hours of interviews so a lot of the people you see on stage and a lot of the moments on stage come from the actual interviews they did.

“Some of us play one-offs from specific characters. Others play composites of several different people. The writers wanted to talk to everybody, and everybody wanted to talk to them. The events of that day struck everybody down and, at the same time, opened them up. They were all kinda open–all walking wounds, coming together.”

Despite the emotional thrust of the show, there are still unexpected pockets of human comedy along the way. “Some audiences don’t expect the humor,” admits Kimball. “They connect with what the show’s about, and they’re kinda expecting a little bit more of a dramatic piece. Certainly, it’s not without its drama, but the fact is: hilarity ensues when you have 7,000 strangers descending upon a town.”

The relationship of the gay Kevins, he says, didn’t survive the Gander stopover. “In earlier iterations of the show, they were named Colin because they couldn’t find Kevin 2 to get his permission, but he caught the show in Seattle and really wanted to come on board so they changed the names back to The Kevins. As a result of his participation, their conflict has gotten stronger. We only had snippets of it before.

“The genius of what our director, Chris, has done is that he has crafted it in a way where, even though you only see snippets, you’ve still gone on the journey and can fill it in yourself along the way. He allowed us a lot of freedom. None of us are imitating. We really create the roles ourselves. Jenn and Beverly are very different, but they have the same kind of spirit and objective connection underneath.”

Among Kimball’s other roles are a bus driver, a union chief and the U.S. President. “People lampoon George W. Bush all the time so they’re expecting it to be kinda funny, and then they realize, ‘Oh, wait–that was a serious moment.’ Laura Bush came to the show with three friends when we were in Washington. I was pretty nervous. I said, ‘How’d I do?’ And she was very complimentary. In fact, she loved it.”

The show seems to have gained emotional momentum at every stop, and, according to Colella, it started in June of 2015 with a tumultuous reaction in La Jolla, with audiences springing to their feet as one at the finish. “As anyone can feel, the energy is palpable and beautiful. Everyone’s been so gracious of spirit and let us know it at the end of the show. When that wall of sound comes at us, we know they love it. And it’s not just because it’s entertaining. I think there’s some healing going on as well.”

She believes the show’s feel-good spirit has drifted to the other side of the footlights, too. “Just doing this piece has changed us all,” she says. “It’s softened our edges. We were in love with each other to begin with, but now we’re genuinely like a family. We take good care of each other. It’s incredible to watch how we all have changed.

“And, of course, we feel the audience. We’re speaking to them—and Chris has directed us to look into the eyes of the audience members and talk to them. We see them crying. We see them laughing. It’s very different than anything I’ve ever done.”

Kimball seconds that. “That’s the dream. We pinch ourselves. It’s what we got into theater to do—to affect this kind of catharsis on an audience and to affect change.” 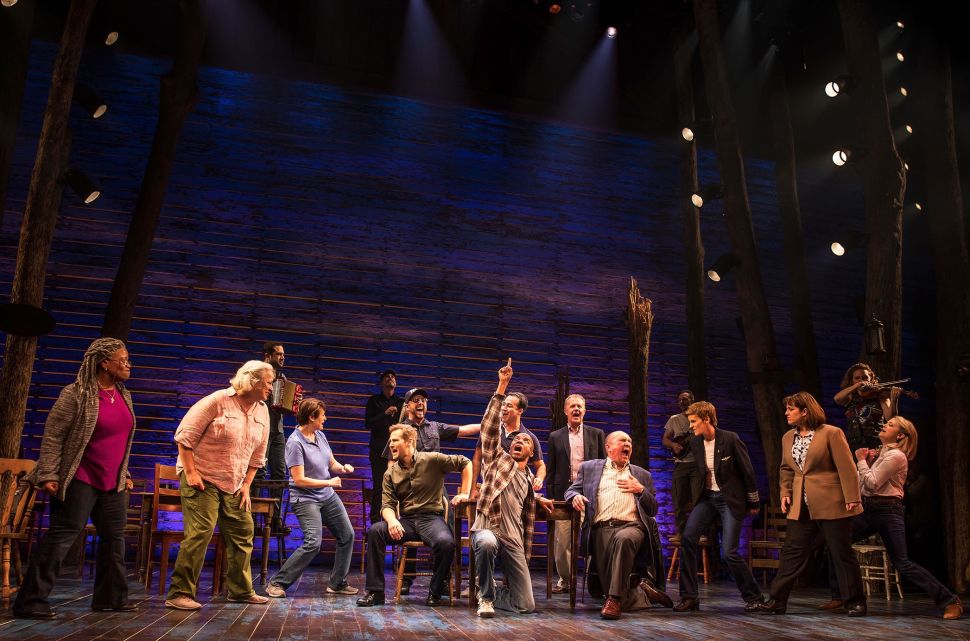