About halfway through the first episode of Crashing, HBO’s new show by and about Pete Holmes, Pete finds himself homeless, lost, heart-broken and explaining how he came to be this way to fellow comic Artie Lange (himself). He’s just caught his wife, Jess (Lauren Lapkus) in the act of cheating on him and bombed hard at his first opportunity to perform his stand-up at a serious club, and rambles his way through his life story into Artie’s kind ear. Within the rambling, though, Pete reveals some pretty important information about how he ended up in such a dour place, and it explains a lot of what happens to him next.

The big takeaway from Pete’s life story is the part where he tells Artie that, after college, everyone just sort of paired off with each other. He’s talking about how and his wife ended up married here, and he best he can offer is that they paired up. This is not a rare turn of events, but it is a signal about the kinds of thoughts, feelings, and impulses that went into such a massive decision. It indicates a lot about what Pete and Jess saw in each other, and what they wanted to get out of the relationship.

When two people “pair off” for life, it’s hard to argue that they were motivated by passion. Which is fair – people end up in relationships for a lot of reasons – but 22-year-olds marrying not for passion does raise some eyebrows. Passion is not the only thing required in a successful marriage, but it is certainly a considered a classic component in one. So when it’s so obviously missing, a fact reinforced by Jess’s failed attempts to engage in some steamier-than-usual sex with Pete, one has to assume that something else is filling the void.

The closest anyone comes to getting a grade for grocery shopping is whether or not they develop scurvy.

The paired off nature of Pete and Jess’ relationship indicates that this ‘something else’ is likely to be convenience. Becoming an adult is hard, hard work, and existentially terrifying too. Growing up requires a level of self reliance and ability to self-teach that far exceeds anything from childhood. Millennials are the most college-educated group of people ever, and for many of them graduating college is the first time in their lives that they won’t have someone telling them what to do, think about, and improve on. The closest anyone comes to getting a grade for grocery shopping is whether or not they develop scurvy.

Relationships between young adults necessarily revolve around the pair growing up and learning to take care of themselves. The danger in this is that they often become codependent and a-romantic as one or both start relating to the other as more of a parent or mentor than as a lover and partner. In Pete and Jess’ case, it looks like Jess was able to do the work of growing up (likely on account of having to have a job and interact with peers who won’t put up with arrested development), while Pete languished in a younger emotional phase.

So Pete ends up, inevitably, destroyed. And finds himself blubbering it all out to Artie Lange, a guy who certainly appears to be the worst possible option for caring and insightful mentor. But when you think about it, it actually all makes perfect sense. Sensitive American boys of this generation tend to have strained relationships with their fathers as a result of growing up in a drastically different world than them. Because of this, once-traditional coming of age activities like being taken hunting or camping, or even just throwing a ball around and talking about the big questions, have fallen by the wayside. An alarming number of young men in America never got to have that moment when their father figures recognized their manhood; they’re not being welcomed into the tribe.

Pete and Artie find each other because they’re perfect for each other – Pete needs a masculine figure to welcome him into the tribe, but only has his child’s mind fantasy of masculinity to go on. Artie offers Pete what’s known as a Dark Initiation, a welcoming into a masculinity that is seemingly untouched by any kind of social refinement. Artie is tough, crass, streetwise, and somehow manages to be generous at the same time that he’s fundamentally selfish. Most importantly, Artie is alone against the world. He’s a guy still convinced that he can make it on his strength alone, which is precisely the kind of fantasy masculinity that a child’s mind comes up with.

By the second episode, Artie has integrated Pete into this loner masculinity. Pete is not only staying at Artie’s house, but he’s been given a key. Moreover, he now works for Artie, as a driver, a sobriety coach, and an opening act. But Pete’s a smart guy, and he can see that this take on adult life isn’t right for him – he’s put off by Artie’s combativeness, addictions, and sex-positive attitude. And once they get to Albany, Pete sees another option open up when T.J. Miller (himself) gets in an argument with Artie backstage.

T.J. and Artie’s argument reveals a new kind of masculinity to Pete: T.J. is able to argue without seeming violent and crass, as evidenced by his sharp suit and intelligent insults. He can engage with masculine aggression without losing himself to it. As a result, he is able to enjoy the crowd’s attention after the show, whereas Artie is more comfortable as a loner. T.J. shows Pete a form of masculinity that manages to integrate into the tribe, instead of having to remain forever at its edges. Unsurprisingly, by the end of the episode Pete has hitched his wagon to T.J.’s horse.

The real value here, of course, is not in T.J. being some kind of bizarre masculinity tutor for Pete, but in Pete seeing different options and making choices. T.J. isn’t better than Artie – Artie helped Pete at his lowest moment in an act of tremendous generosity – but he is a better fit than Artie. Pete has moved past the support of his family, has lost the support of his wife, and now finally has to figure out what being an adult means for him. He could go either way and find some measure of happiness, the specifics don’t matter. But in choosing one path over another, he is determining who he will become rather than letting caretakers do so for him.

Ultimately, it is that willingness to choose that signals maturity. Making real, significant choices is incredibly difficult, because you’re picking one option and leaving behind an infinite number of other options. It’s a brave response to a cruel system, one that many people try their best to avoid. But in making deliberate choices, we get to assert ourselves against it, regardless of the pain of such a responsibility. And maybe this is why the show is called Crashing; life is hurtling at us in every moment, we can’t avoid being hit by it but we can try out best to ride out the shockwave. 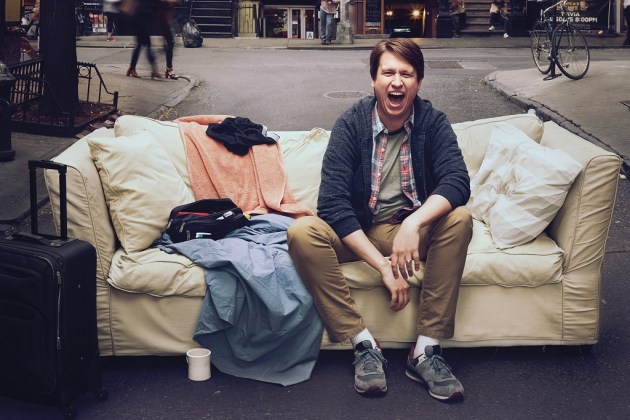